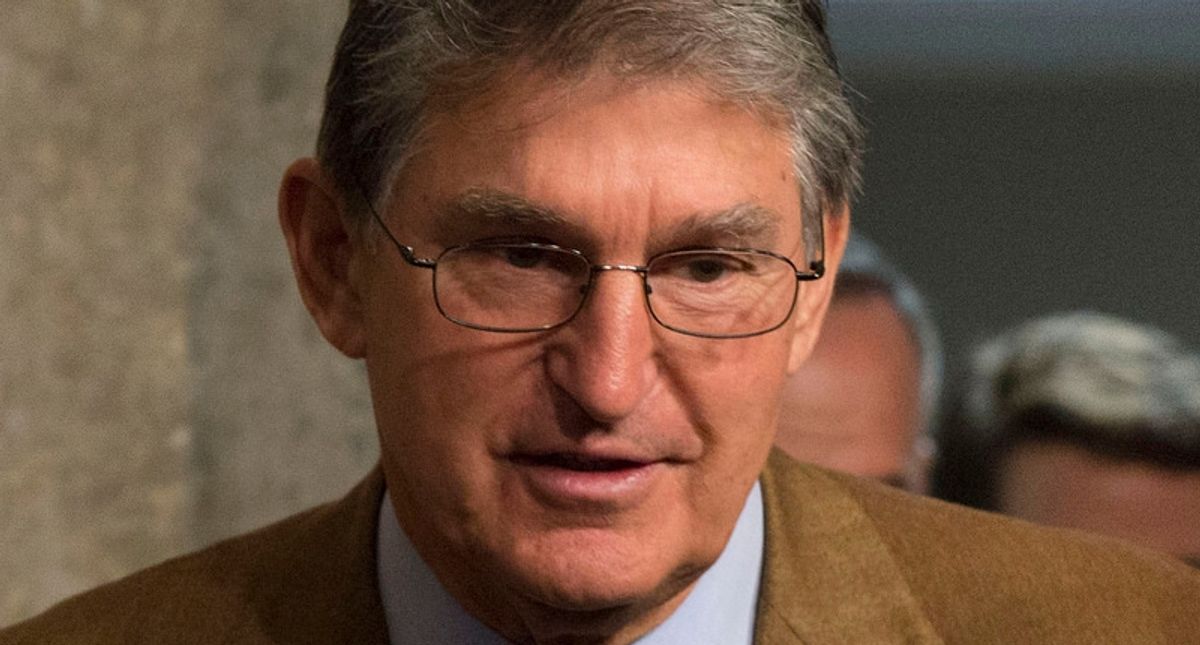 As support for abolishing the legislative filibuster outright continued to grow inside the Senate Democratic caucus, Sen. Joe Manchin of West Virginia signaled Sunday that he would be open to reforming the archaic rule to make it "more painful" for the minority to wield as a tool of endless obstruction.

While reiterating his opposition to completely eliminating the filibuster—which is currently standing in the way of a sweeping expansion of voting rights, immigration reform, climate legislation, and other priorities of the Biden White House—the West Virginia Democrat noted Sunday morning that in recent years the filibuster has evolved to a point of requiring virtually no effort to deploy beyond sending an email.

Manchin, the most conservative Democrat in the Senate, suggested to Chuck Todd of NBC News that he would be willing to support a return to the talking filibuster, wherein senators who wish to block legislation from advancing must remain on the Senate floor and speak continuously.

In a Sunday appearance on Fox News, Manchin raised a similar idea, saying, "The filibuster should be painful, it really should be painful and we've made it more comfortable over the years."

"Maybe it has to be more painful, maybe you have to stand there," Manchin continued. "There's things we can talk about."

Manchin's remarks were viewed as a major development in the growing push to remove—or, at the very least, weaken—the filibuster as an impediment to much-needed legislative change as Senate Republicans make clear that they have no intention of working with the majority even on overwhelmingly popular legislation.

Not a single Senate Republican voted for the widely supported $1.9 trillion coronavirus relief package that the Democratic majority passed Saturday using the filibuster-proof budget reconciliation process, which requires just a simple majority to pass legislation. With the current filibuster in place, Democrats will effectively need 60 votes to pass much of their legislative agenda.

"Manchin can support reforms of the filibuster—make them talk, etc.—while removing the 60-vote threshold for a final vote, and still say that he did not end the filibuster," The Intercept's Ryan Grim tweeted in response to the West Virginia Democrat's comments. "Hard to overstate how big this is."

Adam Jentleson, who served as deputy chief of staff to former Senate Majority Leader Harry Reid (D-Nev.), has also suggested reviving the talking filibuster, telling Grim in an interview last month that prior to the 1975 revision of the rule, "you had to actually show up, you had to speak, you had to talk."

"You have now the no-show filibuster," said Jentleson, the author of a new book on the history of the Senate. "If you really believe in the filibuster, let's return it to the talking filibuster, where those who want to obstruct through additional speech get to do so, but they are going to have to be there."

Manchin's Sunday statements came less than a week after the West Virginia Democrat shouted at reporters that he will "never" agree to killing the filibuster, which progressives have taken to calling a "Jim Crow relic" in reference to its past use as a weapon against civil rights legislation.

In the days that followed Manchin's outburst, several members of the Senate Democratic caucus who are far from progressive firebrands—including Sens. Amy Klobuchar (D-Minn.) and Bob Casey (D-Pa.)—spoke out in favor of abolishing the filibuster in the face of an intransigent Republican minority.

To scrap or alter the filibuster, Democrats would need the support of 50 senators plus a tie-breaking vote from Vice President Kamala Harris.

Sen. Tina Smith (D-Minn.), a previous supporter of the filibuster, wrote in a Facebook post Thursday that she has arrived at the view that "the filibuster has long been the enemy of progress" and a "highly effective tool to thwart the will of the people."

"The Senate needs to abolish the filibuster," Smith argued. "Right now, the Senate has 50 Republican senators. They represent less than 44% of America. And yet they still have the power to stop us from passing laws that a majority of America wants."

In an appearance on MSNBC Sunday night, Casey said that while just a few years ago he would not have supported eliminating the filibuster, "we've got an unyielding, partisan, ideological foe in the Republican Party, and they won't allow major issues to come forward."

"We've gotta get to voting rights. We have to get to commonsense gun measures. We gotta deal with climate change," said Casey. "We have to do so much that is essential to allow us to move forward as a people and to protect our democracy."

"We have a lot of work to do," Casey added, "and if that means changing the rules, we gotta do it."