The Conversation
Photo by Kira auf der Heide on Unsplash
What happens to the gifts you get? I’m not talking about the ones that you really adore. I mean the rest of them – the ones you can’t or don’t want to use, or even hate.

The problem doesn’t end when you’ve awkwardly thanked someone and thrown away the wrapping paper. In my case, I stowed an awful present from my dad in a closet for years. Whenever I looked at it, I got upset all over again.

That experience was one reason why I became a consumer researcher who studies gift giving. Based on my research, I have come to understand the price paid by the people who get unwelcome gifts.

Painful gift giving falls into two categories. One is intentional and the other is accidental. Either way, it burdens friends and loved ones with unwanted stuff they may try to get rid of.

One common solution, at least for purchased gifts, is returning them. But even when the giver gets a refund or the recipient converts an eyesore into a pile of more useful cash, that still takes a toll.

Retail holiday sales amounted to an estimated US$720 billion in 2018, with about 10 percent of those purchases being returned. 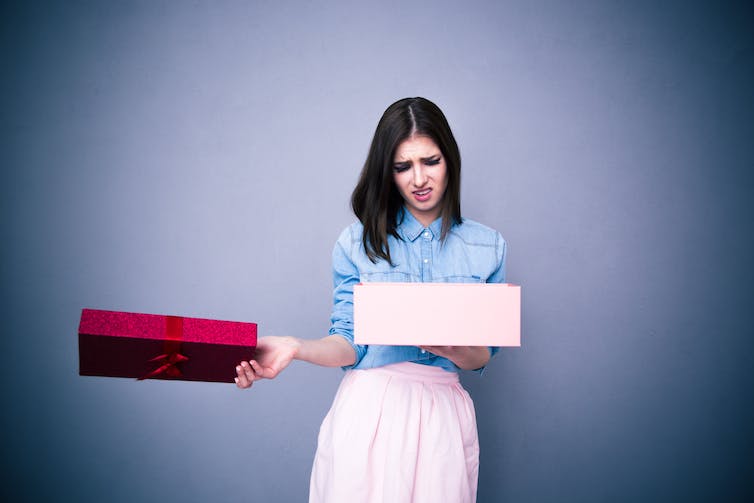 She has no words.

To learn more about how people deal with gifts they don’t like, want or need, I teamed up with consumer behavior expert Leon G. Schiffman. We did 30 in-depth interviews individually with 15 couples to study what happens in those situations. I always began with the question, “Can you tell me about gift giving between you and your spouse?”

I also searched for the words “gift returns” on message boards at Babycenter.com and analyzed more than 500,000 relevant results.

With both approaches, I found that a lot of people, mostly women, want advice about returning gifts. I also saw that many people try to not let givers know about it.

Some people feel guilty about returning presents, but not everyone. It seems that people tend to follow one of what Schiffman and I call two gift-giving rulebooks.

One is economic. Some people just care about the monetary value of gifts. They don’t want to waste the giver’s money and effort so they try to swap out the gift for cash, credit or merchandise they want or need.

The other is symbolic. Some people see gifts as a means of communication. They fret about the message they may send by returning, exchanging, or otherwise getting rid of the gift. They worry about how the person who gave it to them might feel if they knew.

Some people feel compelled to make use of unwelcome gifts out of concern for their friends or loved ones. That can cause trouble.

For example, a woman who gets a purse she hates for Christmas from her husband might not want to hurt his feelings by letting him know. She would then use it at least occasionally to give him the impression that she likes it. What options would she have to subtly let him know not to buy her another one for her birthday?

It depends on her rulebook.

For people in the symbolic camp, they have two options: use it or store it. The ones who take the storage option might go out of their way to still use the gift once in a while, taking the utmost care not to hurt the giver’s feelings.

The economic types are more practical.

When they are sure that the person who gave them an ugly purse for Christmas are also pragmatic, then they have no qualms about returning, exchanging, donating, selling or re-gifting the thing.

However, if they aren’t sure about how the giver might feel, they might be like the people I found seeking advice on the internet. They often ask questions such as whether they can return gifts purchased through Amazon or registries without the sender knowing, and if it’s rude to return gifts.

These questions indicate that recipients are concerned about how returning makes gift givers feel – usually not so good – and the giver’s feelings. However, they are also concerned about getting a gift’s monetary value. Common responses to questions about what else can be done when you can’t return something to a store without receipts include donate it, sell it, find another use for it, store it for later use or give it to someone else.

There seems to be a buffer period of time after which a stored item can be donated, sold or re-gifted without many qualms. The apparently sacred power of the gift ebbs over time, making it acceptable to ditch once it no longer seems like a gift.

Whatever etiquette you find appropriate in this situation, apps such as LetGo, Nextdoor and Decluttr can help too. These platforms offer avenues for selling unwanted items, whether it’s new or old.