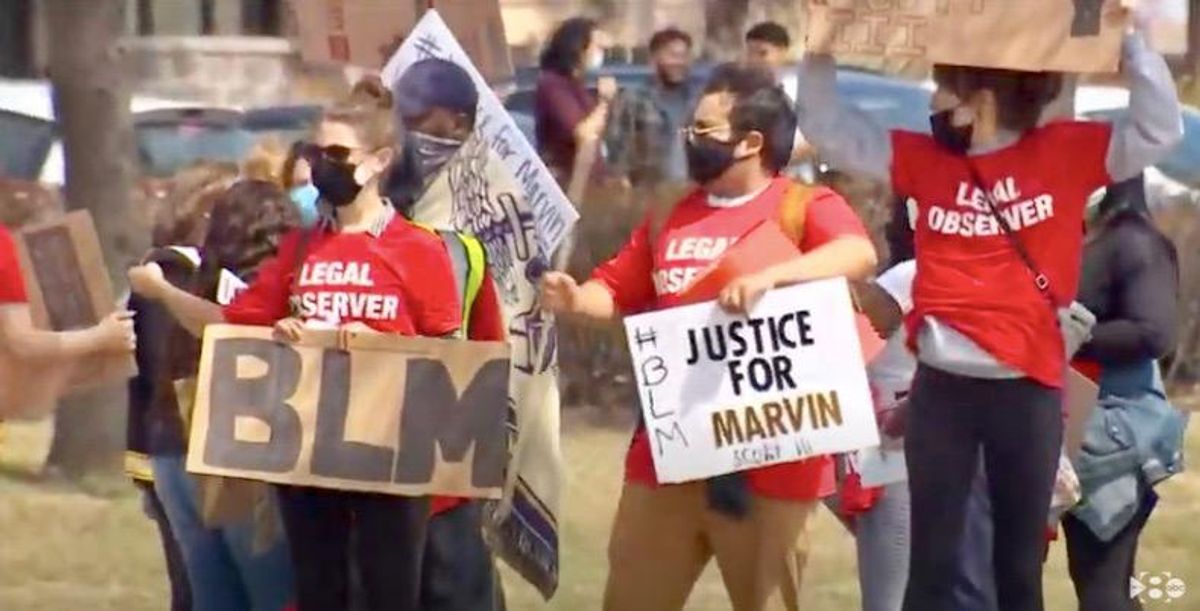 For the past four weeks, a group of up to 40 protesters has gathered outside the Collin County Jail nearly every night around 9 p.m. They hang signs, draw on the sidewalk with chalk and decorate the chain link fence, celebrating the life of Marvin Scott III, who died while in the custody of jail staff in March.

Consistently, their memorials have been taken down by county staff. But that doesn't deter his sister, LaChay Batts, from returning every day with other community members outside the jail in McKinney.

"We just do it again," Batts, 28, told the Tribune Sunday, her voice hoarse from chanting all day. "They want us to stop, to go away. We're gonna remain until the officers are arrested."

On March 14, Scott was arrested in Allen, nearly 15 miles from where he lived in Frisco, on a marijuana charge. Authorities said he had less than two ounces — a misdemeanor. The 26-year-old, who received a schizophrenia diagnosis two years ago, sometimes used the drug to self-medicate, according to the family's lawyer, S. Lee Merritt.

After Allen officers transported him to Texas Health Presbyterian Hospital for what police called "strange behavior," he was taken to the county jail. There, officers restrained Scott, used pepper spray and covered his head with a spit hood, a controversial device meant to keep a person from biting or spitting on an officer. Scott became unresponsive late that night and was pronounced dead at a hospital. 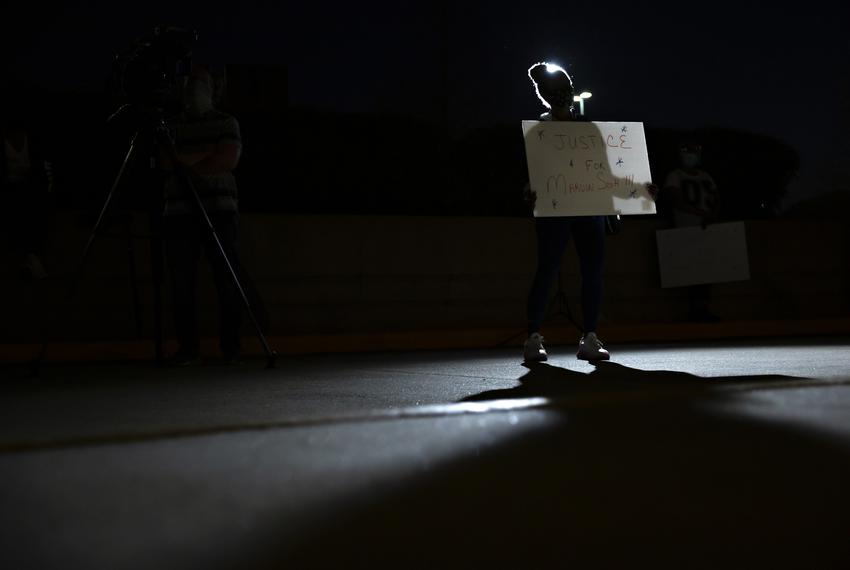 Melinda Whittemore participates in a demonstration held by Next Generation Action Network at the Collin County Courthouse in McKinney to demand justice for Marvin Scott III, who died while in custody at the Collin County Jail on March 14. Credit: Shelby Tauber for The Texas Tribune

Though seven of the sheriff's officers have been fired after initially being put on administrative leave and another resigned while under investigation, the family and protesters say they don't plan to stop until the officers have been charged with a crime. The officers' names have not been publicly released. The Collin County Sheriff's Office, which operates the jail, said personnel information cannot be released due to pending civil service appeals.

The Texas Rangers are investigating Scott's case. Nearly a month later, the county medical examiner's office has not yet released an official cause of death.

The family hired a forensic pathologist to conduct a second, independent autopsy. During the March 23 press conference, the pathologist, Amy Gruszecki of American Forensics, said: "The physical struggle of the restraint as well as the possible asphyxia from the restraint would likely be causes of his death, and a negative autopsy, meaning no injuries, no blunt force trauma, is consistent with that."

During the press conference, Merritt said the Collin County district attorney had explained that he would need a cause of death and a medical examiner's report before he could decide whether to pursue criminal charges.

There has been an intense focus on police brutality during the murder and manslaughter trial for Minneapolis police officer Derek Chauvin, accused of killing George Floyd in late May by kneeling on his neck for more than nine minutes — which sparked protests around the nation. And on Sunday, police deployed tear gas against protesters who marched after an officer fatally shot 20-year-old Daunte Wright during a traffic stop in Minnesota.

Scott's family said they did not receive any communication about his arrest and death until the next afternoon, when they received a text message from the medical examiner's office. Batts said the family has not yet seen the jail video related to his death. The footage has been provided to the Texas Rangers, said a representative from the Collin County Sheriff's Office. 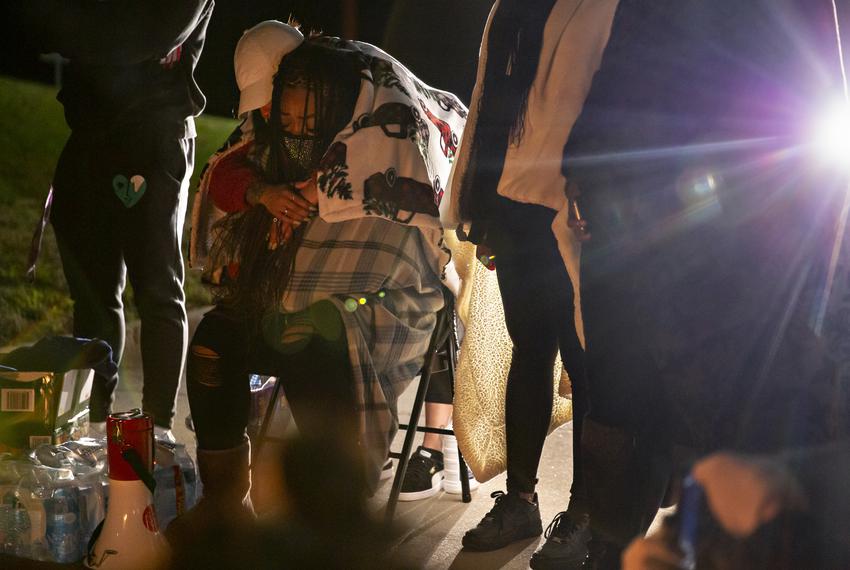 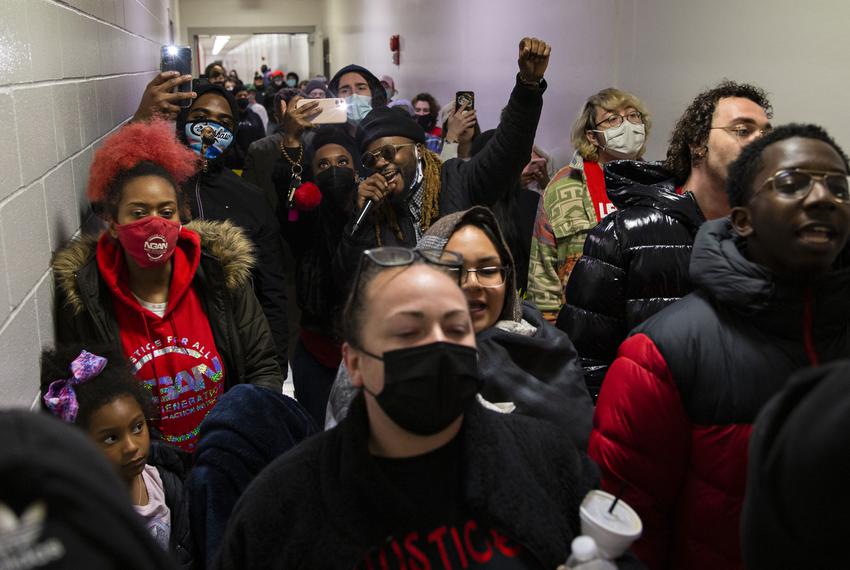 Following a March 17 vigil at Towne Lake Park in McKinney, Batts and her family have stood outside the jail almost every night in hopes of calling attention to Scott's death and to demand justice and transparency. They hand out flyers during the protests, Batts said, and post about the rallies on social media.

What started as a group of up to 40 people has since settled to about 20 consistent protesters, said Elizabeth Michel, a community activist who joined the protests soon after learning about them online. She has been there almost every day since and has addressed the McKinney City Council and the county commissioner's court.

"My role is to support the Scott family and to amplify their voices however I can," Michel said. "The family has asked for those eight detention officers to be arrested. I will do whatever I can to expedite that."

"Today marks 30 days since Marvin was murdered, and we still haven't seen the tape. We still don't know the names of these officers," Batts said on Sunday. "[They] could be our neighbors, and we don't know."

For the first few nights, the protesters congregated near where inmates are brought into the jail. A week later, they arrived to find a new chain link fence surrounding their former protesting grounds, Michel said. 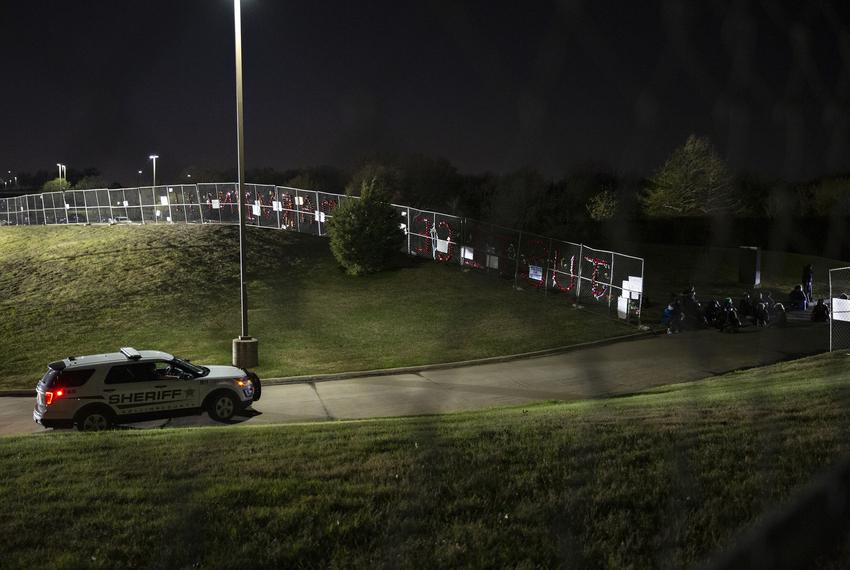 Officers guard the driveway into the jail while demonstrators gather at the Collin County Jail on March 26. Credit: Shelby Tauber for The Texas Tribune

So they began decorating the fence with cups that spelled out Scott's name or "Justice for Marvin," and placing flowers and teddy bears nearby — only to see everything removed every night. Last week, the fence was moved even further from the building to keep protesters away from the staff parking lot as well.

A spokesperson told the Tribune in an email that the sheriff's office respects the right to peacefully protest and established a zone to do so. There have been "some instances of vandalism and property destruction" though the protests have been peaceful, the spokesperson said.

In addition to physical barriers, Michel said that several sheriff's office vehicles have circled the area and flashed the high beams of their headlights on the group. At one point, sheriff's employees told protesters they were unlawfully assembled, she said.

"There's a big sign on the fence that says designated protest," Michel said. "I'm like, 'You told us to be here, and now you're telling us to move again.'"

"They definitely didn't expect us to still be out there," she added. "They expected this to die down and go away. And we're not." 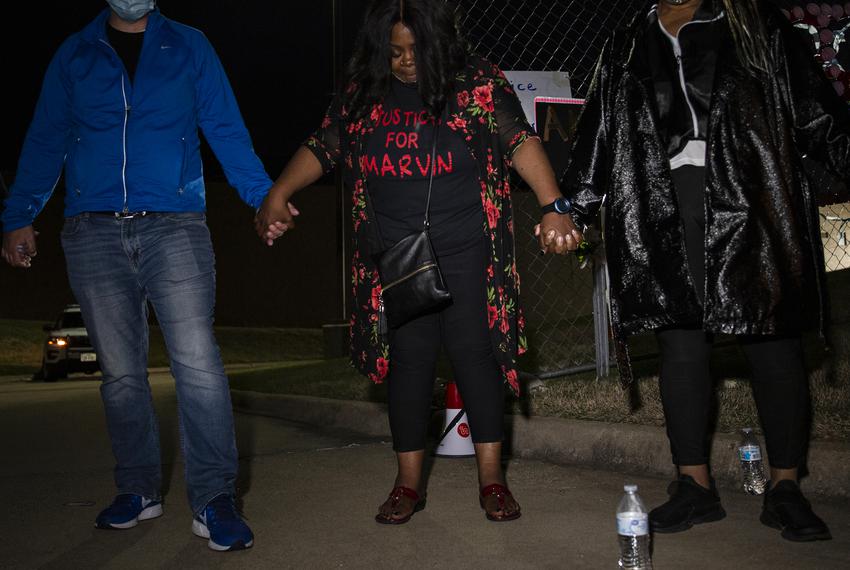 Marvin Scott III's mother LaSandra Scott prays at the end of a demonstration outside of the Collin County Jail. Credit: Shelby Tauber for The Texas Tribune

For Black community members, family is at stake

Kamona Nelson, one of Batts' hairstyling clients, said that while she never met Scott, she knows through his sister that he had a happy spirit. The 39-year-old said she has been protesting with the family since the first day, only missing a few nights here and there.

Nelson said her family moved to McKinney more than three years ago, and she said she was shocked to hear negative things about Collin County law enforcement after hearing that the city was one of the top places to live in the state.

A few years before, in 2015, McKinney police responded to a report of teenagers scaling a fence to enter a private pool party. An officer pointed a gun at the teens and detained a Black girl by throwing her to the ground and pressing his knee into her back. She was ultimately released back to her parents with no charge filed. The incident sparked national outrage and prompted additional protests on its five-year anniversary.

Nelson said that when they first moved to McKinney, three police officers stopped one of her sons, then 15, as he walked home because he happened to fit the description of someone "tall, big and Black" that they were looking for, she said, though they eventually let him go. 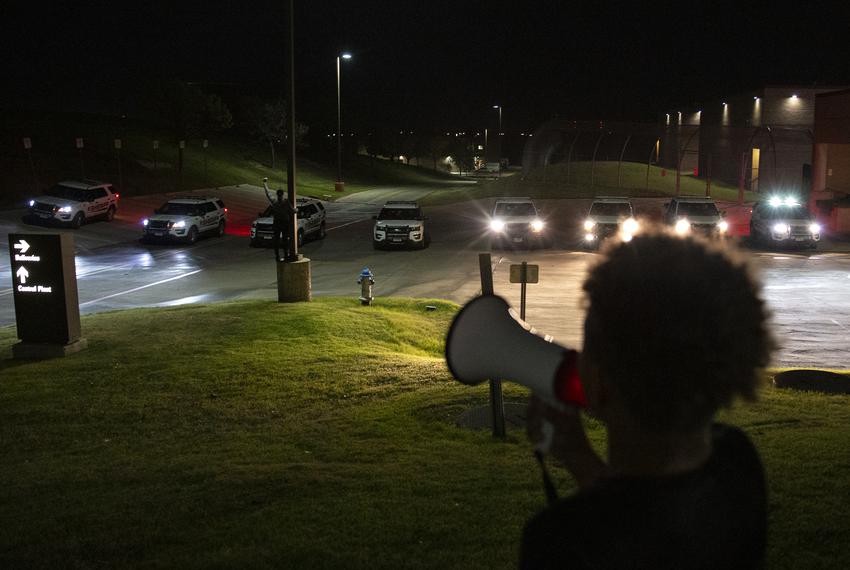 Nelson has brought her sons, now 15 and 17, to the protests a few times, and said the experience has been "surreal" for them — she said her boys were shocked that an incident like this could happen so close to home. Nelson said she has had a very different experience standing with her friend's family compared to when she marched for George Floyd last summer, where she never had any interactions with police.

"It seems like there is a lot of injustice, as if we are doing something wrong," she said of the way officers have treated protesters. "That, I don't understand — why the family is being treated the way that they are."

Batts said having Nelson and so many other community members stand with her family has given her family strength.

While the protests cannot bring Scott back, Batts said they will continue to protest "so this doesn't have to be somebody else's brother."