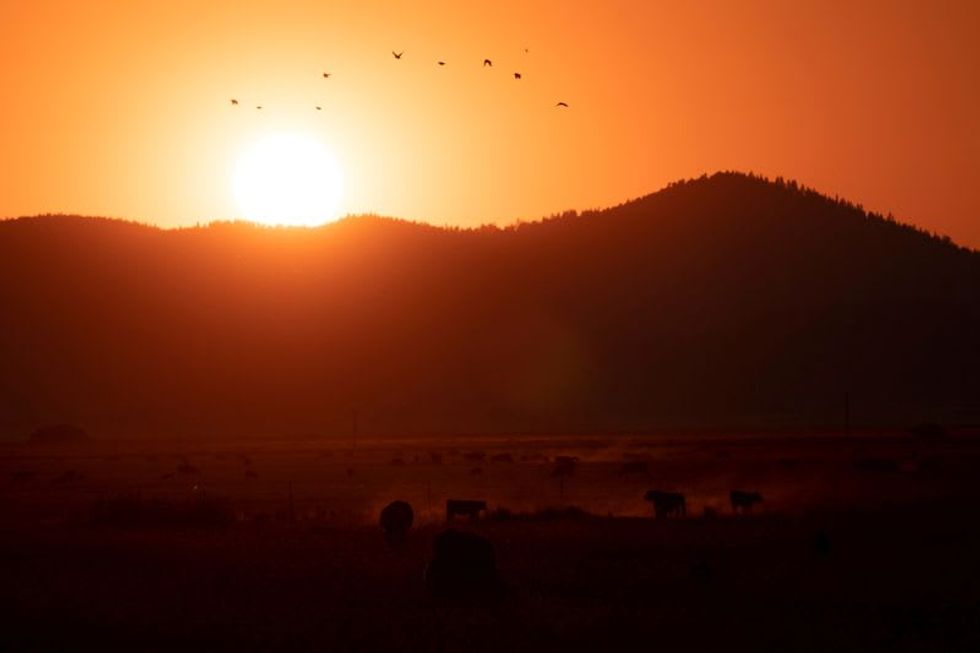 BLY, Ore. (Reuters) - Fed by hot, dry winds, the country's biggest wildfire ripped through more acreage in a southern Oregon forest on Monday, with more than 2,100 residents near the California border ordered from their homes, officials said.

An army of nearly 2,200 fire-fighting personnel battling the so-called Bootleg fire about 250 miles (400 km) south of Portland increased their containment lines overnight to 25% of its perimeter from 22%, Oregon Department of Forestry spokesman Marcus Kauffman said.

"We are fighting the fire aggressively and there are active efforts to build a containment line, both direct and indirect, wherever it is safe to do so," Kauffman said.

Record-breaking heat has baked much of the West in recent weeks, killing hundreds of people. Scientists have said the growing frequency and intensity of wildfires are largely attributable to prolonged drought and increasing bouts of excessive heat that are symptomatic of climate change. (Graphic on megafires) https://tmsnrt.rs/3hx44Hl

Since it started nearly two weeks ago, the Bootleg fire, has taken advantage of favorable weather conditions which are forecast to continue.

The National Weather Service in Medford forecast steady winds, which are pushing the fire toward the north and east, of about 15 miles per hour (24 km per hour), with gusts up to 25 mph, low humidity and temperatures topping 90 Fahrenheit (32 Celsius).

Even the 15% chance of thunderstorms forecast for the area around Klamath County and the Fremont-Winema National Forest was unwelcome news for firefighters.

Two evacuation centers, one at the Klamath Falls fairgrounds and one at a middle school in Lakeview, have been set up for residents displaced by the fire, which has destroyed 67 homes and is threatening 2,460 more.

The Bootleg fire is the largest of 80 active wildfires that have burned nearly 1.2 million acres in 13 states and are being battled by more than 19,600 firefighters and support personnel, according to the National Interagency Fire Center in Boise, Idaho.

In California, PG&E Corp, the state's largest power company, said its equipment may have been involved starting the Dixie fire last Tuesday in a remote, difficult to reach area about 85 miles (140 km) north of Sacramento.

That wildfire has burned more than over 30,000 acres (12,140 hectares) as more than 1,900 fire-fighting personnel have set up containment lines over 15% of its perimeter, according to the California Department of Forestry and Fire Protection.

The so-called Dixie fire, the biggest in the state, prompted some evacuation orders for Plumas and Butte counties, it said.

In an incident report to state regulators on Sunday that PG&E described as preliminary, the company said one of its workers last Tuesday found blown fuses on a utility pole and spotted a fire near the base of a tree that was leaning into a conductor. The worker reported the fire, it said.

Thirteen months ago, the company pleaded guilty to 84 counts of involuntary manslaughter stemming from a devastating 2018 wildfire touched off by its power lines that destroyed much of the nearby town of Paradise.