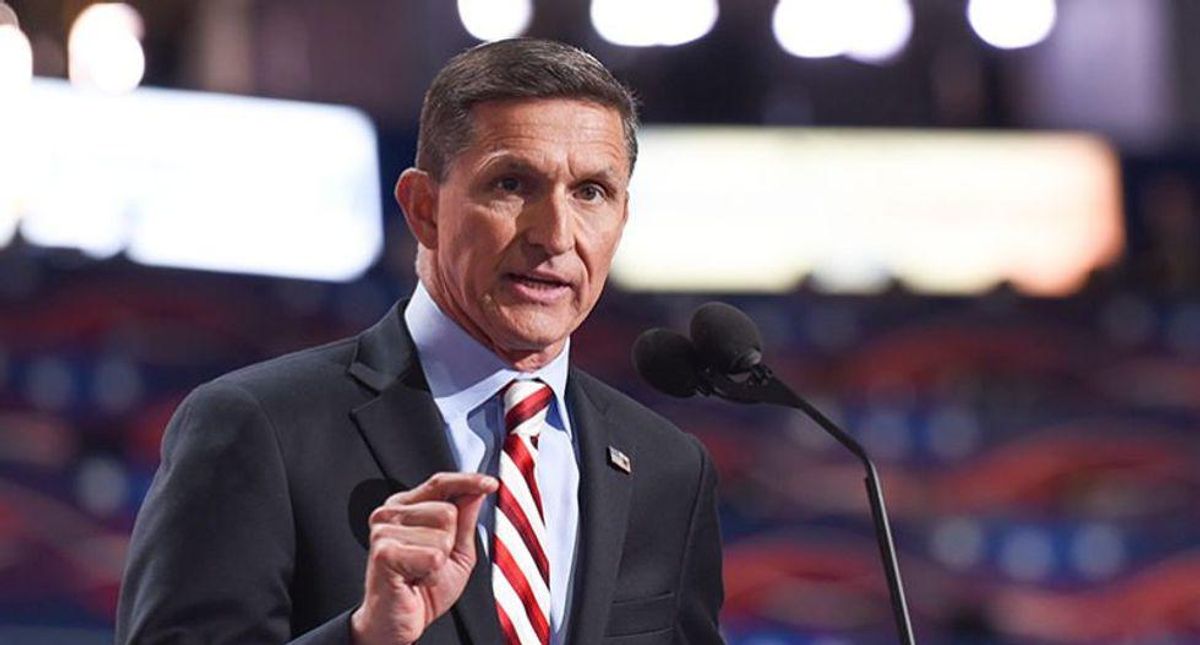 On Thursday, writing for The Washington Post's "The Fix," columnist Aaron Blake outlined how former National Security Adviser Michael Flynn's call for a military coup is just one of the ways in which former President Donald Trump has ignored "giant red alarms" and elevated anti-democracy extremists within the Republican Party.

"One of the undersold aspects of the Trump presidency isn't so much what he did while in office, but how much he elevated fringe figures like Flynn who would never have set foot inside virtually any other president's orbit," reported Blake. "With Trump now out of office, those figures' continued drift toward the fringe and the credibility Trump lent to them is surely one of the lasting impacts of his presidency."

"A prominent example is another speaker at the QAnon-themed conference at which Flynn spoke this weekend," noted Blake. "Sidney Powell was first and foremost in spewing baseless conspiracy theories about voter fraud and voting machines after the 2020 election. She even — like Flynn — parlayed this into briefly working for Trump in an official capacity before being cast aside when she apparently went too far even for Trump's team. Powell's tenure was even shorter than Flynn's, having been announced as a member of Trump's legal team only about a week before her departure."

Another way Trump has elevated extremists, wrote Blake, is how he pardoned the ranchers at the heart of Ammon Bundy's violent standoff in an Oregon wildlife refuge — which has been followed by Bundy only being emboldened in his anti-government mission.

"Bundy, today, is ramping up for a run for the GOP nomination for governor of Idaho," wrote Blake. "It's a campaign for which he's struggling to qualify for the ballot and which he'd surely struggle to win. But as the Daily Beast reported Thursday, it's easy to undersell the implications of such a campaign in today's environment, given the reach of ideologies like Bundy's in the West and his storming of the Idaho Capitol last summer, which turned out to be something of a precursor to Jan. 6. And Trump, again, fed into such things more than other presidents would have."

"Again, these have been and will apparently remain fringe figures in the Republican Party. But we've also seen what a motivated fringe can do, particularly on Jan. 6," concluded Blake. "And if the most recent exploits from the likes of Flynn, Powell, Bundy et. al. tell us anything, it's that they'll probably keep pushing the bounds."