Trump's generals weren't the only ones: Did Mike Pence fear a coup too? 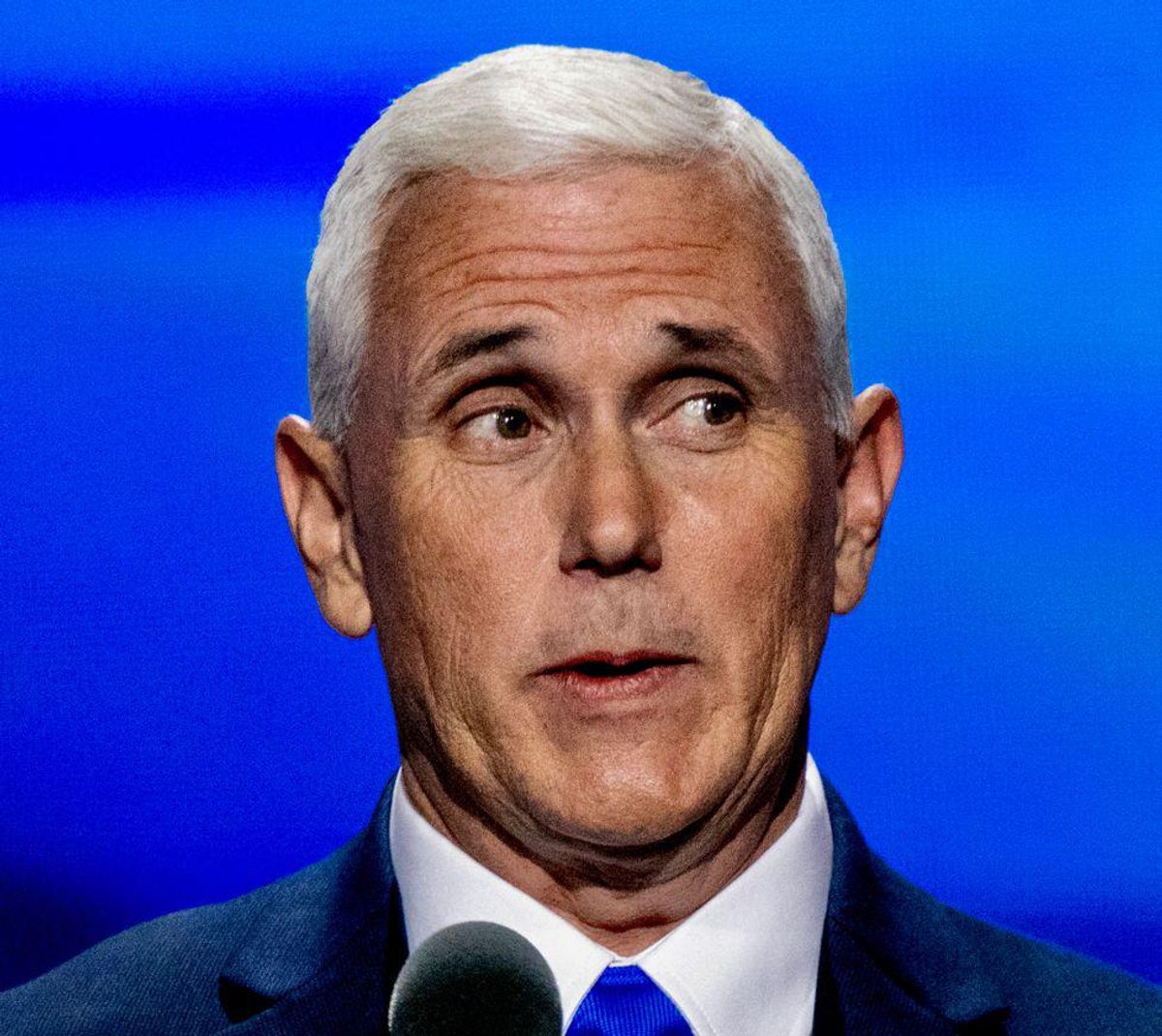 Back in 2016, candidate Donald Trump made it very clear that as president he would not hesitate to order the military to torture prisoners. On March 3rd of that year, in a presidential primary debate, Fox News anchor Brett Baier noted that over 100 foreign policy experts had signed an open letter refusing to support him because his "expansive use of torture" is inexcusable, declaring that the military would refuse because they have been trained to refuse illegal orders.

Baier asked Trump, "so what would you do, as commander-in-chief, if the U.S. military refused to carry out those orders?"

"They won't refuse," Trump arrogantly replied. "They're not going to refuse me. Believe me."

He went on to rant about terrorists "chopping off heads" and how he would go beyond waterboarding, ending with this:

He walked back his comment the next day with a perfunctory statement promising not to give an illegal order but it was clear that he was utterly ignorant of the president's constitutional limits and saw himself as a would-be dictator. And throughout his presidency, he said over and over again that he had the power to do anything he chose, parroting what one of his flunkies told him about "Article II" of the constitution:

Nobody took him very seriously, to be sure, because it was ridiculous. And with the exception of regularly firing members of his administration, until the final year of his term, he tended to push the boundaries of his power mostly by breaking long-standing norms and corruptly abusing his office for political and financial gain which he did frequently. But as he faced re-election in the midst of the COVID pandemic, which he had no idea how to handle, and the humiliating prospect of losing re-election (along with the legal protections the office gave him) it's clear that the people around him started to get worried that he was going to use his very robust and clearly delineated powers as Commander in Chief for political purposes.

It was perfectly legitimate for him to disagree with the Pentagon about policy and direct them to follow his orders despite their resistance. But he began to delve into areas of military justice and discipline, following the advice of Fox News pundits who convinced him that accused and convicted war criminals were being persecuted for doing the kind of dirty work Trump had advocated in his 2016 campaign. He intervened in one trial and pardoned some others. When the Navy tried to keep one of the accused from retaining his Navy Seal designation, Trump insisted he be allowed to keep it and the Navy Secretary was fired when he protested the interference.

In June of 2020, Trump was incensed by the George Floyd protests and was demanding that the active-duty military intervene to quell them. And it was at this point, according to several new books about the final year of the Trump administration, that the Joint Chiefs of Staff started to get nervous, particularly its chairman, General Mark Milley, who had been involved in the notorious clearing of Lafayette Square that culminated in Trump's infamous photo-op with a Bible. Milley eventually publicly apologized for allowing himself to be used as a political prop. What we didn't know until now was that the discussions that happened around those protests awakened the Pentagon leadership that Trump was becoming unhinged. As the presidential campaign heated up and they saw that he was setting the table to call the election illegitimate if he lost and contest the results regardless of the circumstances, they became alarmed. When Trump fired Esper the day after the election and installed some of his most notorious henchmen in the Pentagon, it's safe to say that the top levels of the military's hair were collectively on fire.

According to the latest book by Philip Rucker and Carol Leonnig called "I Alone Can Fix It," as the surreal post-election period dragged on with the administration refusing to cooperate in the transition and Trump becoming more and more desperate, Milley and the others apparently saw the potential for street clashes between Trump's "brownshirts" (as he called them) and police leading to Trump declaring an insurrection and demanding the use of the active-duty military to step in. He seems to have feared this is what would lead to a "Reichstag Fire" moment in which Trump would somehow attempt to stay in power. He and the senior brass even put together a sort of "Saturday Night Massacre" style plan to resign one by one should Trump attempt it. They were all spooked by what they were seeing.

Clearly Milley has been cooperating with all these authors and has portrayed himself as a hero who saved the Republic which does seem overblown. And it's very unnerving to see a general in this position, working with others to thwart the will of the civilian leadership. That is NOT how it's supposed to work. In fact, it's yet another very important norm that seems to have been broken and it's a very important one. But Trump's behavior in the post-election period has been insane by any measure and while he was still in office, he was listening to people like Michael Flynn who was telling him that he could declare martial law and the military could seize the voting machines and run new elections, so there is no doubt we are lucky this didn't turn out a lot worse than it did.

And it wasn't just Milley and brass who were paranoid about what was happening. In "I Alone Can Fix It" a chilling anecdote shows that Vice President Mike Pence was just as nervous.

On January 6th, his Secret Service detail wanted to drive him off the Capitol grounds and he refused saying to his top agent Tim Giebels, "I'm not getting in the car, Tim. I trust you, Tim, but you're not driving the car. If I get in that vehicle, you guys are taking off. I'm not getting in the car." The book goes on to describe the man in charge of the Secret Service's movements telling Pence's national security adviser, Gen. Keith Kellogg, they planned to move Pence to Joint Base Andrews. Kellogg told him not to do it saying, "he's got a job to do. I know you guys too well. You'll fly him to Alaska if you have a chance. Don't do it."

There are a number of ways to interpret that but MSNBC's Nicolle Wallace said on Thursday, "someone familiar with this reporting tells me that Pence feared a conspiracy. He feared that the Secret Service would aid Trump in his ultimate aims that day." Considering everything that had been going on, all of which Pence was no doubt aware, that would not have been a ridiculous suspicion. After all, if they could have gotten Pence out of town they would have thwarted the certification of the electoral college vote at least for that day. Who knows what would have followed? (And what does this say about the Secret Service?)

We all saw a lot of this as it unfolded in real-time. And we certainly suspected that this sort of thing was happening behind the scenes. These accounts, no matter how self-serving they might be, show that whatever suspicions anyone had were more than justified.

Arizona Democratic Sen. Kyrsten Sinema was riding high on Wednesday as a group of Republicans announced their support for a bipartisan infrastructure deal, though by the afternoon, it still wasn't clear if it had enough votes to pass. Just as momentum was building for that legislation, though, Sinema deflated hopes for Democrats' follow-up act: a $3.5 billion budget reconciliation bill.

The budget bill only requires 50 votes to pass, avoiding the 60-vote threshold that the Senate typically requires to enact a law. That means Democrats don't need any Republican votes to pass a budget bill. But with only 50 Democratic lawmakers in the Senate, the party needs every member on board if it's going to shove its spending priorities through the budget process, as has long been the plan. In a Wednesday statement to the Arizona Republic, though, Sinema announced she doesn't want to spend $3.5 trillion in the bill.

Paul Krugman: GOP 'family values' rhetoric is as 'intellectually bankrupt' now as it was in 1992

"Hillbilly Elegy" author J.D. Vance, who is seeking the GOP nomination in Ohio's 2022 U.S. Senate race, was cynically playing the family values card when he railed against the "childless left" during a speech on Friday night, July 23 — and he even mentioned some Democrats by name. Liberal economist Paul Krugman has responded to Vance's speech in his July 26 column for the New York Times, stressing that Republican "family values" rhetoric is as empty and vacuous in 2021 as it was when the GOP made "family values" the theme of the 1992 Republican National Convention.

Vance was speaking at an event hosted by the Intercollegiate Studies Institute, and the Democrats he singled out as examples of the "childless" trend in the U.S. included Vice President Kamala Harris, Transportation Secretary Pete Buttigieg, Sen. Cory Booker of New Jersey and Rep. Alexandria Ocasio-Cortez of New York City. And Vance praised Hungarian Prime Minister Viktor Orbán — a far-right authoritarian — for encouraging more procreation in his country. Booker and AOC, reporter Martin Pengelly noted in The Guardian, don't have any children. Harris has two stepchildren with her husband, Doug Emhoff.