Millions hunker down as storm hits eastern US 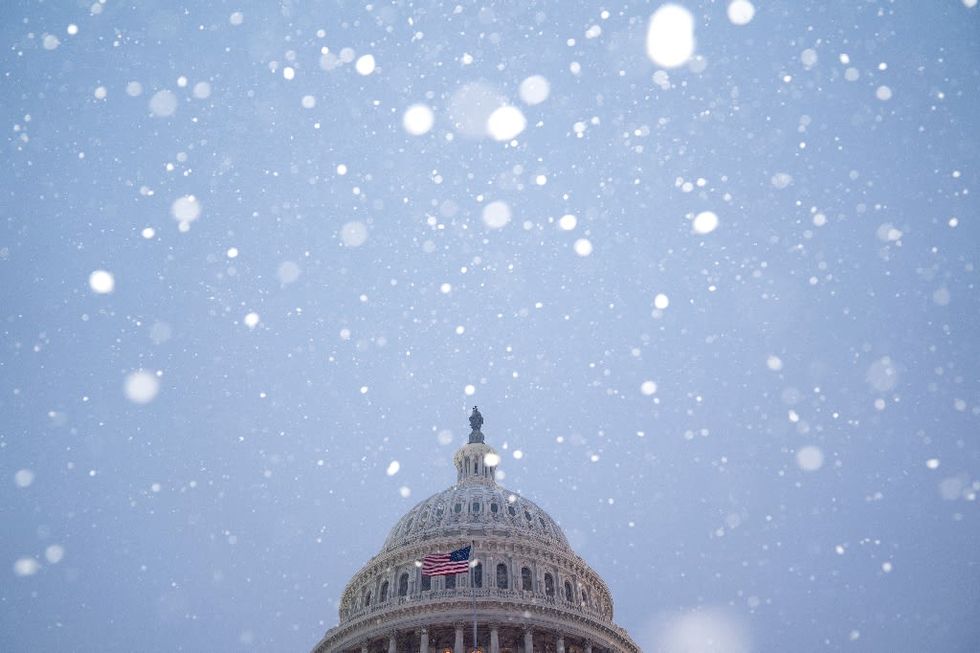 The US Capitol dome during a snowstorm in Washington, DC, on January 16, 2022

Washington (AFP) - Millions of Americans hunkered down as a major winter storm hit the eastern United States with heavy snow and ice knocking power out for an estimated 190,000 customers as of early Monday.

The National Weather Service (NWS) said the storm was bringing a miserable combination of heavy snow, freezing rain and high winds, impacting the southeast and coastal mid-Atlantic before moving up to New England and southern Canada.

A swath from the upper Ohio Valley north to the lower Great Lakes region could expect more than a foot (30 centimeters) of snow Monday, it warned.

"Heavy snow and ice accumulations are likely to produce hazardous travel, downed trees, and power outages through Monday for portions of the eastern US," it said.

In all, more than 80 million people fell under the winter weather alerts, US media reported.

About 190,000 customers were without power early Monday, according to the website PowerOutage.US.

The storm spawned damaging tornadoes in Florida and flooding in coastal areas, while in the Carolinas and up through the Appalachians icy conditions and blustery winds raised concerns.

Transport was seriously disrupted, with thousands of flights canceled, and a portion of busy interstate highway I-95 closed in North Carolina.

More than 3,000 flights within, into or out of the United States were canceled Sunday.

Charlotte Douglas International Airport in North Carolina was the worst-affected with 1,200 flights, or more than 90 percent of its scheduled services, canceled, according to the FlightAware website. A further 1,200 flights nationwide had been canceled early Monday.

Drivers were warned of hazardous road conditions and major travel headaches from Arkansas in the south all the way up to Maine, on the Canadian border.

Georgia Governor Brian Kemp had declared a state of emergency on Friday, and snowplows were at work before noon Sunday to clear the roads.

More than 15 inches of snow had fallen in parts of North Carolina by late Sunday night, the NWS tweeted, with areas of Georgia and Tennessee also seeing 10-11 inches.

A "multi-vehicle backup," along with minor crashes, had earlier stopped traffic on a major interstate in the southern part of the state.

North Carolina Governor Roy Cooper said on Twitter that up to a foot of snow had fallen in some areas by midday, and that "significant icing is causing trouble in the Central part of the state" as he reminded people to stay inside and avoid travel if possible.

Also in North Carolina, students were shaken up after the storm caused the roof of a college residence hall to collapse, according to a local ABC news station, though no one was hurt.

The northeastern United States already experienced snow chaos earlier this month. When a storm blanketed the northeast, hundreds of motorists were stuck for more than 24 hours on the I-95, a major highway linking to the capital Washington.