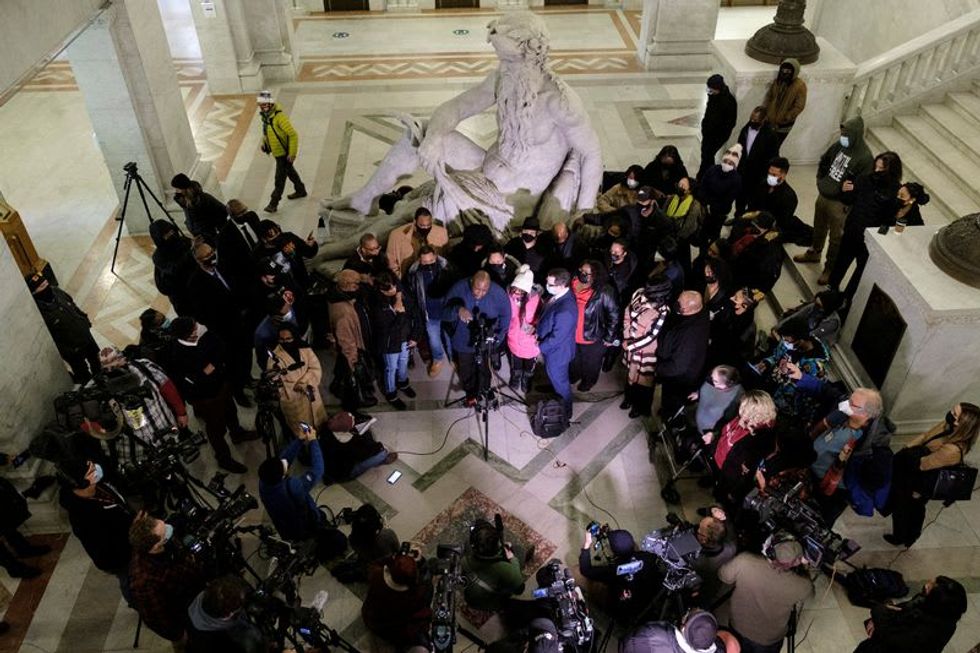 By Shubham Kalia and Shivani Tanna

(Reuters) -Minneapolis Mayor Jacob Frey announced on Friday a moratorium on no-knock warrants after police fatally shot a 22-year-old Black man during a raid on an apartment.

The Minneapolis Police Department released video and a still image showing the man, Amir Locke, holding a gun as he twisted around beneath a blanket after being roused by officers who entered the apartment on Wednesday to carry out a search warrant.

A no-knock warrant authorizes police officers to enter a property without first knocking and announcing their presence.

"To ensure safety of both the public and officers until a new policy is crafted, I'm issuing a moratorium on both the request and execution of such warrants in Minneapolis," Frey said in a statement.

The incident is the latest to put the Minneapolis police department under scrutiny.

Almost two years ago, George Floyd, an unarmed Black man, was killed by a white officer who knelt on his neck for over nine minutes during an arrest. Outrage over Floyd's death sparked a nationwide movement challenging police brutality and bias in the U.S. criminal justice system.

The video of Locke's arrest, which was released on Thursday, shows police unlocking his apartment with a key, and officers shouting, "Police, search warrant, get on the ground, get on the fucking ground," as they entered.

An officer then kicks at the couch where Locke was lying and as Locke turns, an arm comes out from beneath the blanket, showing a gun held in the hand. Almost immediately, police fired at least three shots.

Locke was not named in the search warrant, which was issued in relation to a homicide investigation that is being run by the neighboring Saint Paul Police Department, Minneapolis Police Department interim chief Amelia Huffman said on Thursday.

Locke's parents described their son as a talented musician, beloved member of his community, and law-abiding citizen at a news conference on Friday with their lawyer, prominent civil rights attorney Ben Crump, who also represented Floyd's family.

"I'm going to fight every day, throughout the day, 365 days, to make sure that Amir Rahkare Locke gets justice for being executed by the MPD," said Locke's mother, Karen Locke. "We are going to make sure that we speak loudly for Amir."

In a statement released on Wednesday, the Minneapolis Police Department said that the man had a "handgun pointed in the direction of the officers."

During a news conference on Thursday, Huffman said the county's attorney will review the facts, in response to a question noting that the video appeared to show that Locke's gun was pointed toward the floor.

"As there's a gun emerging in your direction, you are forced to make a split-second decision on when it's a threat," Huffman added.

In commenting on the search warrant in the homicide probe, Huffman said, "It is unclear at this time how he or if he was connected to the Saint Paul's investigation."

She added that officers from the Saint Paul's Police Department were at the scene later and had recovered possible evidence for the homicide investigation.

According to the family's lawyers, Locke had no criminal history and legally possessed a firearm at the time of his death.

"In the wake of George Floyd and Breonna Taylor, the City of Minneapolis told the public that it was limiting the use of no-knock warrants to 'limit the likelihood of bad outcomes.' Less than two years later, Amir Locke and his family needlessly suffered the worst possible outcome," Jeff Storms, another lawyer representing Locke's family in the case, said in a statement.

Taylor, a Black woman, was shot and killed when armed police raided her Kentucky apartment in March 2020. Floyd was killed in May 2020.