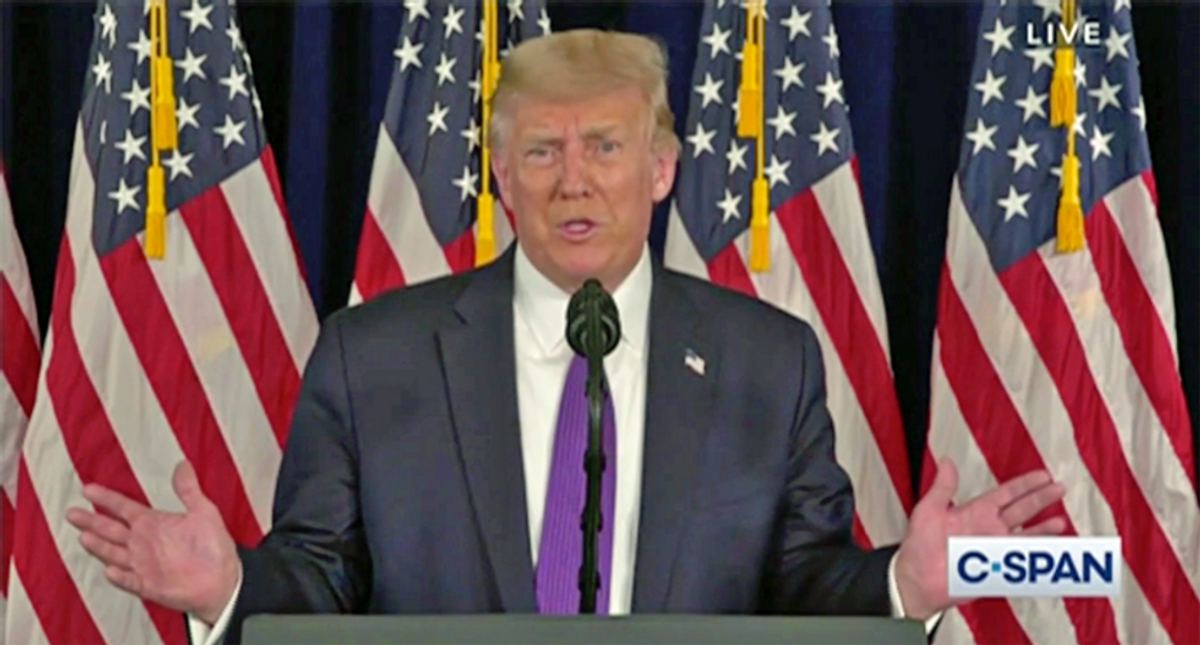 Republican gubernatorial candidates are trying to act like Donald Trump to win their primary races, but that could cost them in the November general election.

Three candidates -- Jack Ciattarelli, Phil Rizzo and Hirsh Singh -- are vying for the GOP nomination to run against Democratic Gov. Phil Murphy, who remains popular despite criticism over his handling of the coronavirus pandemic, reported Politico.

"I believe if the other two were to win the primary, the focus is less on Phil Murphy and New Jersey," said Ciattarelli, who holds a major fundraising advantage over his GOP rivals. "So let's make it all about New Jersey. That's what I will do, and I'll be very very disciplined in that sense. Phil Murphy is going to want to continue to talk about [former Republican Gov.] Chris Christie and Donald Trump."

But all three candidates are fighting over Trump voters, who are hugely influential in the New Jersey GOP but greatly outnumbered in a state Joe Biden won by 16 points.

"[Trump was] the greatest president of my lifetime," Singh said during last month's debate, and repeated his election lies. "We all know Trump won."

Singh's campaign manager King Penna angered Ciattarelli's wife while watching the radio debate in a back room at the station, calling the GOP candidate a "never Trumpian loser" and accusing the couple of not voting for the former president.

"Yes he did, he did support [Trump]," Melinda Ciattarelli said.

Rizzo tweeted out a photo of himself with Trump at a Mar-A-Lago fundraiser for another candidate and held a fundraiser at a Trump-owned golf course in Monmouth County, although he still has spent only $442,000, compared to $510,000 for Singh and $6 million for Ciattarelli.

"I think Jack is going to win," said state Sen. Joe Pennacchio (R-Morris), Trump's campaign co-chair for New Jersey in each campaign. "You have Rizzo and Singh both fighting for the same vote. They're going to cannibalize that vote."

Ciattarelli is viewed as the frontrunner, and he's placed a bit of distance between himself and the former president with an eye on November's general election.

Certainly Republicans have not fared well in New Jersey during the Trump era," Ciattarelli said, "so while his policies worked at the national level, there were policies on which I disagreed with the president."

But Murphy's campaign will remind voters that Ciattarelli attended a "Stop the Steal" rally in the fall and refused to disavow a right-wing Oath Keeper who's running for the General Assembly.

"The question New Jerseyans need an answer to is: How far is Ciattarelli willing to go to placate the far-right?" said Phil Swibinski, spokesman for the New Jersey Democratic State Committee. "He's apparently fine being on the ballot with an Oath Keeper, so how about a Proud Boy? Or a KKK member? Or a neo-Nazi?"