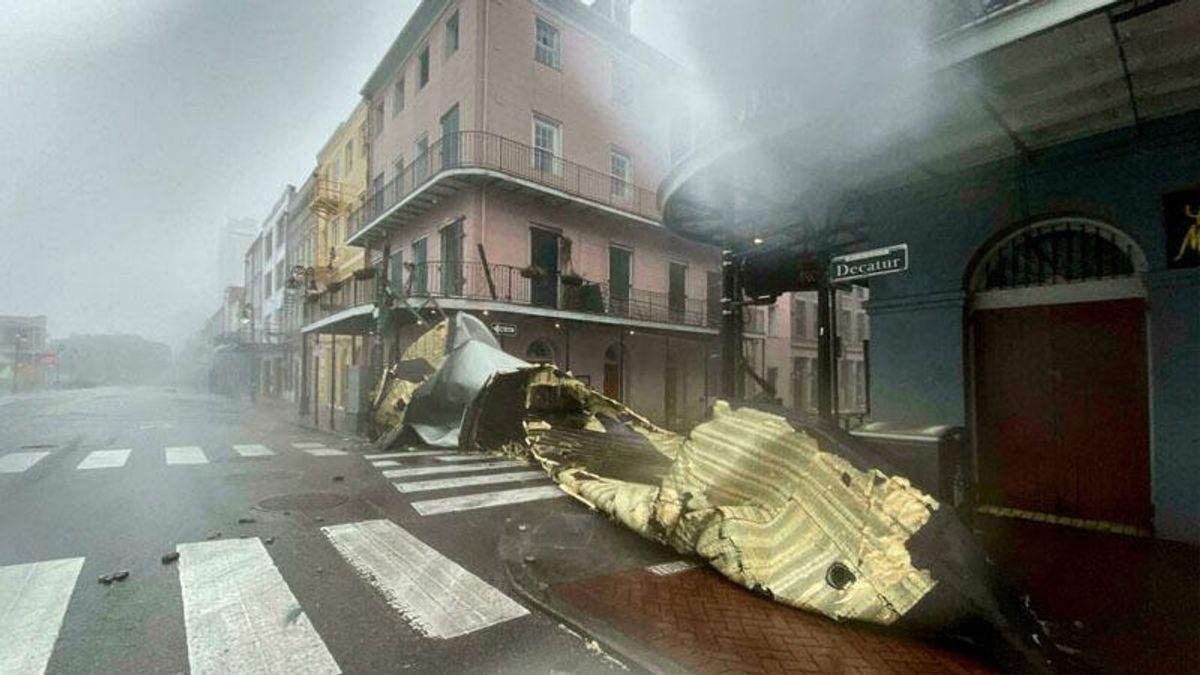 A section of a building's roof is blown off during rain and winds in the French Quarter of New Orleans on August 29, 2021. (Patrick T. FALLON/AFP)

Days after Hurricane Ida knocked out power, people in New Orleans are dealing with extreme heat and gas shortages. Some are struggling to find medicine they need to take.

At the Treme Recreation Center, cars and pedestrians lined up to get bags of ice and Meals Ready to Eat (MREs).

Kim Silver, one of the people standing in line for food, said she and her neighbors were banding together to cook all of the meat they had in their freezers before anything spoiled. Silver is making do, but she is worried about her grandchildren, whom she hasn't been able to contact since they evacuated.

Silver was charging her phone out of her car, but had to stop after two days, when she ran out of gas. Even when she is able to charge her phone battery, her reception is too bad to make calls. She hopes to find out where her grandchildren have evacuated soon.

“My phone was down and I haven't got in touch with them and then the reception is acting so bad so it's even more hard to talk to anybody," Silver said. “I'm hoping by today I'll be able to get them on the phone."

The Treme site had 4,320 bags of ice and around 50,000 MREs ready. One of the site managers, Captain Kim Alexius-Watkins, said the hurricane had also been hard for the 50 soldiers working at the site.

“They have damage to their homes as well and they also have family that is displaced and we're working on efforts getting them back in contact with their families," Alexius-Watkins said. “But it's commendable that they're out here, and it's selfless, considering that they've also been impacted."

Alexius-Watkins hasn't been back to her own home in Slidell yet.

At the Milne Recreation Center, people came for air conditioning and to charge up their phones. College student Daryelle Mitchell said she arrived at noon and planned to leave at four, and would probably return the next day. She said she's been waiting to hear back from her university and from her job, but hasn't received any word about when she'll be able to return to either.

Mitchell was five when Hurricane Katrina happened, and she said it taught her what to do in the aftermath of a storm. For her, it's about waiting it out.

“Just time and patience, just trying to figure out when people are coming back to check on their property," Mitchell said. “Gas, money, food, it's very limited at this point."

“We're just doing what we do best here as New Orleanians, coming together, working together and helping each other get through this tough time because it's hard for everybody," Burnett said.

Besides food and electronics, others are concerned about their pets. RTA buses are partnering with the Louisiana Society for the Prevention of Cruelty to Animals, setting up eight air-conditioned buses around New Orleans where pet owners can bring their animals. Inside the Milne bus, dog bowls were filled with ice cubes and water while the air-conditioning stayed on full blast.

Around six dogs had been taken care of on the bus Wednesday, LSPCA staff member Persie Naylor said.

“People are trying to cool their animals down because a lot of them are very clearly experiencing heat symptoms," Naylor said.

Lee Burgau came to the center to find out how to get more insulin. He is currently down to one shot of insulin, and the only reason he has that one is because he didn't take his full dose of insulin Wednesday.

He is extremely worried about where to get the three shots he needs a day.

“It's just one of those cracks some people slip through. I don't particularly like this world we live in," Burgau said. “I'm not used to being a diabetic going through a hurricane. I wasn't prepared. I just didn't think."

“If I don't get insulin I die. It's plain and simple."