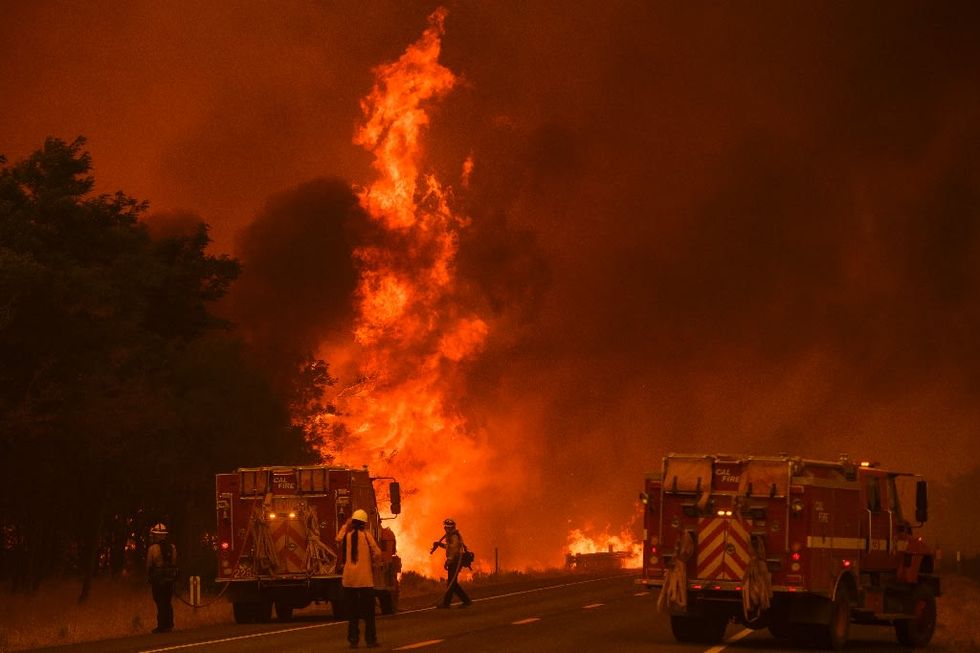 The Dixie Fire has now consumed more than 600,000 acres of California, one of dozens of blazes raging across the state

Susanville (United States) (AFP) - A wildfire that erupted outside California's state capital just a few days ago had exploded to cover more than 53,000 acres by Wednesday.

At least two people had to be airlifted to hospital as the Caldor Fire tore through a small town around 80 kilometers (50 miles) from Sacramento.

Thousands of people have been told to seek safety, with the fire raging uncontrolled through the Eldorado National Forest.

"Please, please heed the warnings, and then when you're asked to get out, get out," Fire Chief Thom Porter said, according to the Sacramento Bee newspaper.

"We need you out of the way so we can protect your homes from these fires."

The fire, which started on Saturday, grew eightfold in 24 hours, according to incident updates, a frightening demonstration of its aggression.

The Caldor Fire is one of scores raging across the tinder-dry western United States, as man-made climate change alters weather patterns and brings chronic drought to the region.

It has now scorched more than 600,000 acres in the month since it started, and is the second biggest blaze in California's history.

Photos taken by an AFP journalist show towering flames consuming the trees along the side of a highway, as firefighters try to set containment lines.

In the town of Janesville, the burned out hulks of cars sit among the still-smoking undergrowth; elsewhere, mailboxes exposed to the ferocious heat of the flames have melted out of shape.

The acrid smoke created by wildfires sparked an air quality advisory Wednesday for residents of the Bay Area, around San Francisco.

Utility PG&E on Tuesday began shutting off power supply to more than 50,000 customers.

The company -- which has acknowledged that its equipment may have started the Dixie Fire -- said the shut-offs were to avoid the danger of live lines falling on dry vegetation.

The last decade has seen a huge rise in the number of wildfires in the west of the United States.

Climate change linked to the burning of fossil fuels has made the region dryer and hotter for longer, creating ideal conditions for the blazes to rage.