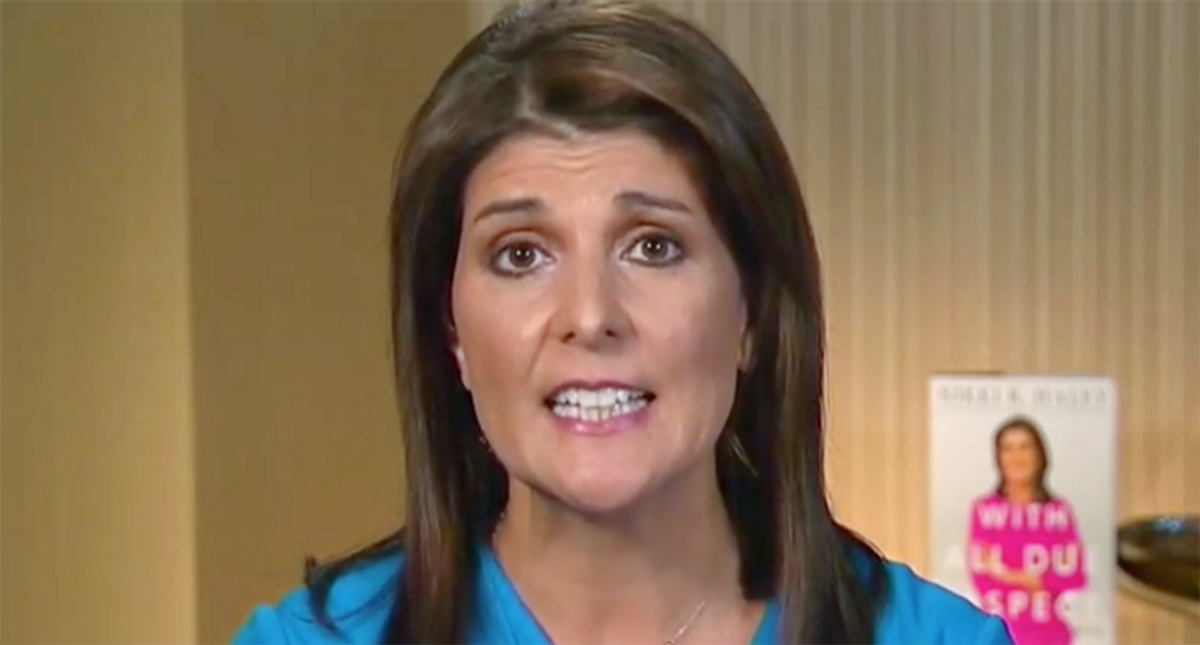 Former President Donald Trump's former Ambassador to the United Nations, Nikki Haley, is being strongly criticized after telling Fox News, "I don't even think there's a basis for impeachment." Trump incited the January 6 insurrection at the Capitol that resulted in five deaths, including the killing of a police officer. At least 134 law enforcement officers were assaulted during the attempted coup. And a majority of voters, 52%, blame Trump for the attack.

But according to Haley, Trump deserves "a break," and those who support conviction in his Senate trial should instead just "move on."

Trump's seditious actions after the election "were not great," Haley conceded to Fox News' Laura Ingraham Monday night, despite Trump literally lying for months to the American people so much that the vast majority of Republicans falsely think Democrats stole the election.

For the first time in American history, there was not a peaceful transfer of power, and yet Haley say Trump "absolutely" does not deserve to be impeached.

And she is playing the GOP's hand, attacking Democrats with President Joe Biden's call for unity.

"Now they're going to turn around and bring about impeachment yet they say they're for unity," she whines, insisting Americans' demands for accountability in the wake of Trump's insurrection are "only dividing our country."

Nikki Haley: I don't even think there's a basis for impeachment... Now they're going to turn around and bring about impeachment yet they say they're for unity... I mean at some point I mean give the man a break. I mean move on... pic.twitter.com/IqnZrIDIY0
— Acyn Torabi (@Acyn) January 26, 2021

Haley was destroyed on social media.

Trump invited people to DC to riot, incited those people to riot, happily watched on his TV as rioters halted Biden's certification, tweeted love to the rioters as they rioted, and a "this is what you get" message to the victims.
Nikki Haley wants you to give him a break. — Jeremy Newberger (@jeremynewberger) January 26, 2021

Indeed, no one's had it tougher than the guy who incited the deadly insurrection.
— Seth Masket (@smotus) January 26, 2021

What kind of whacko says “give the guy a break" after using the sacred & highest office in the land to “find" him over 11,000 votes and when that doesn't work surround the Capitol with an angry mob of assassins and cop killers to steal it?
— Patricia Arquette (@PattyArquette) January 26, 2021

According to Nikki Haley, Trump's been "beaten up" continually, by the Dems and the media.This notion of Trump, as an innocent victim and an underdog, excuses his crimes and bigotry. His opposition didn't invent Trump: they exposed him. He's not a hurting child, he's a sociopath
— Paul Rudnick (@PaulRudnickNY) January 26, 2021

Haley takes a stand on the violent attempt to subvert the presidential election: It was "not great." https://t.co/oFGwSUOizp
— Philip Bump (@pbump) January 26, 2021

Man, she is so, so awful. Her overweaning ambition has drained any moral fibre from her. Just embarrassing.
— Norman Ornstein (@NormOrnstein) January 26, 2021

Let the boy incite one insurrection! I mean, give him a break! https://t.co/4V3SrXQFaW pic.twitter.com/hVCuRJNKWK
— Dave Itzkoff (@ditzkoff) January 26, 2021

She is right, though. Treason is "not great." 😆 She sure is a master of understatement.
— Mike Forsythe (@PalmCoastGus) January 26, 2021

"This is ridiculous. You're telling me they're holding trials, at Nuremberg, for former Nazis, even though their Reich no longer exists?" https://t.co/8iMtqygBg7
— Frank Lesser (@sadmonsters) January 26, 2021

Bad news: Nikki Haley, who is angling to be the GOP's next non-Trump nominee, knows that the GOP base wants to hear that Trump doesn't deserve to be impeached for inciting an attempted coup
Worse news: Nikki Haley is willing to tell them that https://t.co/f2Z2XXnPff — Matt O'Brien (@ObsoleteDogma) January 26, 2021