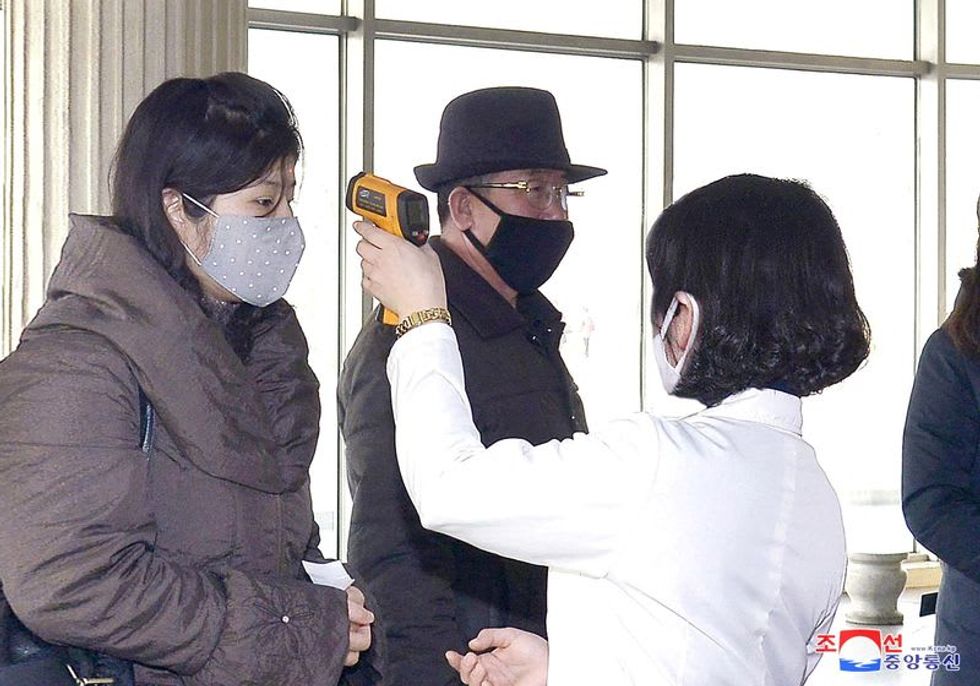 By Heekyong Yang and Jack Kim

SEOUL (Reuters) -North Korean leader Kim Jong Un said on Saturday the spread of COVID-19 had thrust his country into "great turmoil" and called for an all-out battle to overcome the outbreak, as 21 daily deaths were reported among people with fever.

North Korea this week acknowledged for the first time a COVID outbreak, imposing a nationwide lockdown. But there was no sign of a rigorous testing or treatment campaign in the isolated country's rudimentary healthcare system.

"The spread of the malignant epidemic is a great turmoil to fall on our country since the founding," Kim told an emergency meeting of the ruling Workers' Party, according to state news agency KCNA.

"But if we don't lose focus in implementing epidemic policy and maintain strong organisation power and control based on single-minded unity of the party and the people and strengthen our epidemic battle, we can more than overcome the crisis."

The numbers probably represent a fraction of total cases, given North Korea's limited testing capabilities, and could lead to thousands of deaths in one of only two countries without a vaccination campaign, experts have said.

The outbreak could also deepen a dire food crisis, with the lockdown hampering anti-drought efforts and mobilisation of labour.

The Workers' Party meeting heard reports of about 280,810 people being treated and 27 deaths since a fever of unidentified origins was reported starting in late April, KCNA said.

State media did not say whether the new deaths were due to COVID. One death had been confirmed from the Omicron variant, KCNA said on Friday.

Since late April, 524,440 people have shown signs of fever including 174,440 new cases on Friday, KCNA said. About 243,630 have been treated but KCNA has not said how many people have been tested or confirmed the total number of COVID cases.

North Korea has been testing about 1,400 people a week, according to Harvard Medical School's Kee Park, who has worked on healthcare projects in the country, not nearly enough to survey the hundreds of thousands of people with symptoms.

Kim told the meeting the crisis had been caused by the incompetence and irresponsibility of party organisations but transmission was not uncontrollable and the country must have faith in its battle to overcome the crisis in the shortest possible period.

The meeting also heard a report from epidemic control officials that "in most cases, human casualties were caused by negligence including drug overdose due to lack of knowledge of treatment methods".

Kim offered to donate his family's medical supplies for families experiencing hardship "with his resolution to always share the destiny with the people", KCNA said.

"It is good to actively learn from the advanced and rich anti-epidemic successes and experience already gained by the Chinese party and people in the struggle against malicious epidemic," Kim was quoted as saying.

China and Russia are among countries offering help with vaccines, but Pyongyang has not publicly sought assistance.

"By natural extension, we can expect the North to ask China for COVID-19 treatment and testing equipment," he wrote in an analysis.

While much of the world is seeking to live with COVID, China continues to enforce zero-COVID policy putting hundreds of millions in dozens of cities under tight movement restrictions.

North Korea said that party officials, workers and youth continued to be mobilized for work to prevent drought damage and for rice-planting in different parts of the country, KCNA said.

North Korea has not reported on the possible source of the outbreak. A Seoul-based website that reports from sources in North Korea said on Friday some students of a university in Pyongyang had tested positive after participating in an event on May 1. Kim attended the event.

The students had relatives who worked in trade with China and may have spread the virus when they subsequently visited their hometowns outside Pyongyang, the Daily NK website said, citing a source in Pyongyang.

North Korea's border with China was reopened for trade early this year, but in April China suspended freight service between Dandong on its side and North Korea's Sinuiju due to COVID in China.

'Princess of the Wall of Death': Indonesian daredevil defies gravity and stereotypes

Karmila Purba revs her motorbike under the lights of an Indonesian night carnival and rides up horizontally inside a wooden cylinder called Satan's Barrel, drawing gasps from spectators looking down into the drum.

With a smile on her face, Purba delights onlookers as she fearlessly pings around the bowl in Bogor, West Java, spreading her arms to collect tips waved by those above.

Beijing's propaganda machine has outwitted the UN human rights chief on her visit to China, campaigners say, leaving the envoy accused of playing a role in whitewashing abuses against minorities in Xinjiang.

Michelle Bachelet's long-planned trip this week has taken her to the far-western region where Beijing is accused of imprisoning over one million Uyghurs and other Muslim minorities, forcibly sterilizing women and running labor camps that fuel global supply chains.