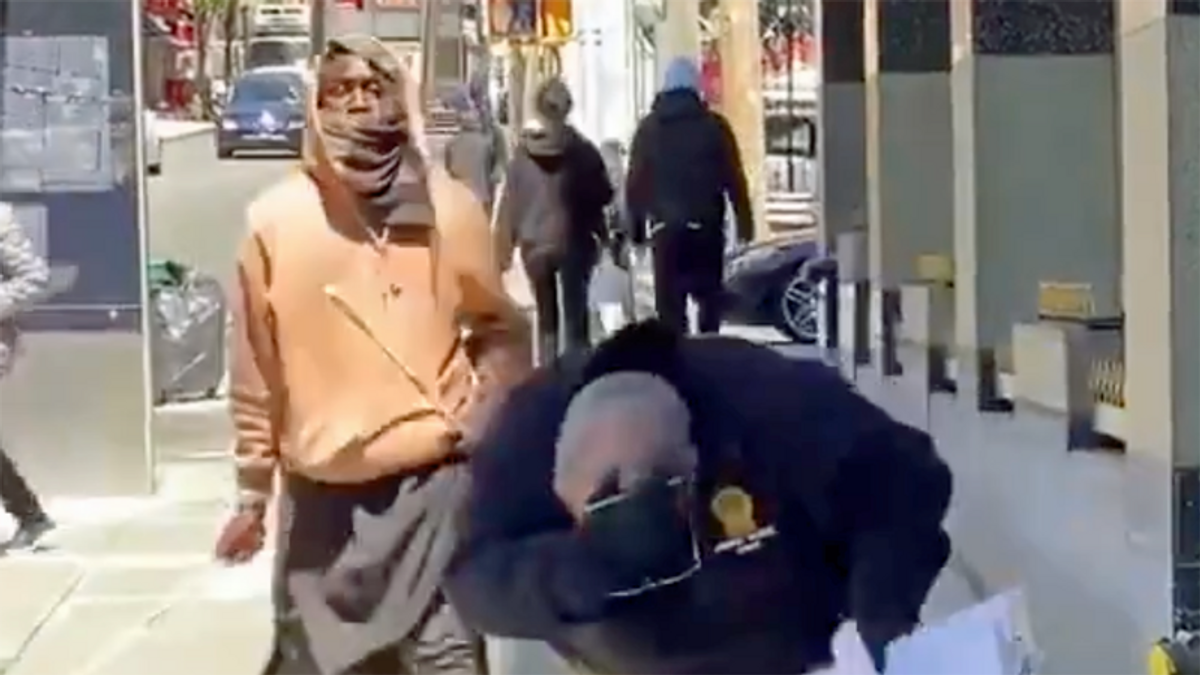 On Monday, the Detectives' Endowment Association posted a video to social media they said shows "emboldened criminals" who "have quickly realized there are no consequences for law breakers in our city."

However, many doubted the veracity of the video, showing how little trust there is between cops and the citizens they are paid to police.

Here's some of what people were saying about the social media post, which was posted by one of the unions who pushed the since-debunked conspiracy theory about police being poisoned at Shake Shack:

sure was lucky someone just happened to be filming this dude quietly standing there and making a few notes! https://t.co/uZmsePtyaz
— Ashley Feinberg (@Ashley Feinberg)1619490030.0

Very convenient someone happened to be recording the exact moment the guy got smacked with a stick
— Alex S. (@GarfieldFan_69) April 27, 2021

No consequences? You literally just said you're filing charges. He was chased after by an officer…
— Jess Coleman (@jesskcoleman) April 26, 2021

Who exactly was it that _happened_ to be taking video of this? Did they know it was going to happen? Why did the perp just stand around, not take off immediately? Why did the cops chase so slowly & erratically? Why did the cop look up at the end like making sure it got on video?
— Zalman Lev (@SuckerBetsFTW) April 26, 2021

If this is the best example of the dangerous criminals on the streets you have, I've seen worse in a freshman dorm. Even when you obviously stage a video you can't make a convincing case for your narrative.
— Cooper Lund (@cooperlund) April 27, 2021

Even in your staged videos you can't even wear your fuckin masks right
— “shmuglas shmeathers" (@mrweathers) April 27, 2021

Hate it when a hardened criminal gently taps my head with a stick while my buddy films me doing paperwork
— Steve Parkhurst (@sssssparkers) April 27, 2021

I have a 3 dollar bill I'd like to donate to this officer's medical fund. This attack looked extremely real.
— Mitch White (@TTMitch) April 27, 2021

Wow this hardly feels staged at all. Who was purportedly shooting video of the officer filling out paperwork for a broken window and how did they happen to on the right side of him to capture the "assault"?
— Jared Lipof (@jaredlipof) April 27, 2021

i was wrong. you guys are right. this clearly not at all staged of a cop getting a boo-boo totally justifies the murders. my bad.
— Tyler Conway (@jtylerconway) April 27, 2021

Maybe he hit him in the head because he thought his clipboard was a gun. Or maybe he meant to hit him with his taser instead and accidentally used the stick. He was standing in front of the broken window, in all the chaos how was he supposed the know the guy wasn't the vandal?
— very much not a racist family (@MikeyWTyler) April 27, 2021

this is the fakest shit I've ever seen. delete your account.
— TwentyTommyOne (@zucko) April 27, 2021