Olympics-Biles withdraws from two finals, Ledecky and Dressel light up the pool 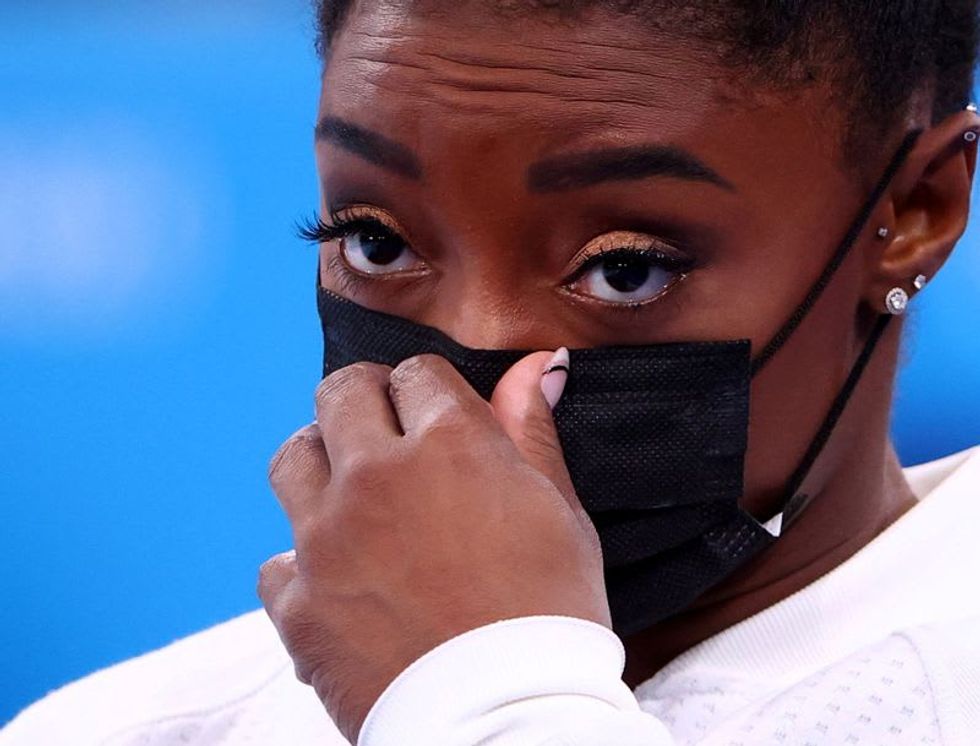 By Steve Keating and Simon Evans

TOKYO (Reuters) - U.S. gymnast Simone Biles withdrew from two more finals https://www.reuters.com/lifestyle/sports/gymnastics-american-simone-biles-withdraws-event-finals-vault-uneven-bars-us-2021-07-31 in Tokyo on Saturday, leaving it unclear whether she will make another appearance at the Games, while swimmers Katie Ledecky and Caleb Dressel recovered some lost lustre https://www.reuters.com/lifestyle/sports/swimming-more-gold-dressel-mckeown-does-backstroke-double-2021-07-31 for America in the pool.

In the first failed drug test of the Games, Nigerian sprinter Blessing Okagbare was provisionally suspended https://www.reuters.com/lifestyle/sports/athletics-nigerian-sprinter-okagbare-banned-after-failed-drugs-test-2021-07-31 after a positive test for human growth hormone ended her Tokyo run.

American BMX racer Connor Fields was moved out of intensive care after suffering a brain bleed https://www.reuters.com/lifestyle/sports/cycling-fields-suffered-brain-bleed-crash-out-icu-says-mother-2021-07-31 during his horrific crash a day earlier. Originally one of the big favourites for gold, Fields went down hard in a first-corner crash during the semi-finals.

China now tops the medal tally https://graphics.reuters.com/OLYMPICS-2020/MEDALTALLY/rlgpdynkjvo/media-embed.html with 20 gold. Japan has 17 and the United States is at 16.

The Games are being held without spectators and after a year delay because of the pandemic, an unprecedented turn in the history of the modern Olympics. There is growing concern in Japan as infections spike, forcing the government to extend a state of emergency https://www.reuters.com/business/healthcare-pharmaceuticals/japan-proposes-adding-four-regions-covid-19-emergency-minister-2021-07-29 in Tokyo and expand it to neighbouring prefectures.

Much of the focus at the Games has been on superstar Biles, who this week stunned the world when she dropped out of the team competition after a poor opening vault and then declined to defend her all-around crown, citing concern for her mental and physical well-being.

"Today, after further consultation with medical staff, Simone Biles has decided to withdraw from the event finals for vault and the uneven bars," USA Gymnastics said, adding she would continue to be evaluated daily to see whether she would compete in the finals for the floor exercise and balance beam.

Her candour has pushed the issue of athlete mental health into the spotlight and triggered an outpouring of global support. She has spoken about the "twisties", incidents of disorientation https://www.reuters.com/lifestyle/sports/i-had-twisties-just-like-simone-2021-07-30, during some of her gravity-defying skills.

"It's honestly petrifying trying to do a skill but not having your mind & body in sync," Biles wrote on Instagram on Friday.

'SHE MADE IT TOUGH'

In swimming, Ledecky and Dressel added to their medal haul and taking some sting off what has been a disappointing Games so far for the U.S. swim team, whose eight golds are just half their tally from Rio.

Ledecky, who lost her 200 and 400 metre titles to Australia's Ariarne Titmus before beating her in the 1,500, on Saturday became the first female swimmer to win six individual golds, cruising home in the 800 metre.

Taking control from the start, Ledecky increased her lead over Titmus from the 500 mark and came home more than a second ahead of her rival, winning the event for a third straight Games, another first.

"She made it tough and so it was a lot of fun to race," Ledecky said.

World champion Dressel stormed to the 100m butterfly title in world record time, picking up his second individual gold to add to the gold he won in the 4x100 freestyle relay.

"It took a world record to win the Olympic final. And I don't think it happens that often in the Olympics," he said

"My plan was go out quick, and then hold on."

Britain won the Olympics' inaugural mixed 4x100 medley relay for their fourth swimming gold, delivering a world record time. Britain's total of four swimming golds in Tokyo is their best return in over a century and breaststroke gold medallist Adam Peaty said they were a team transformed.

The jubilation has been tempered by doping issues and a shocking accident in BMX cycling, as well as the pandemic.

Nigeria's Okagbere, a sprinter and long jump silver medallist at the 2008 Olympics, was provisionally suspended on Saturday morning, the Athletics Integrity Unit, which monitors doping in the sport, said.

The 32-year-old, who has won world championships in the 200m and the long jump and is competing in her fourth Olympics, comfortably won her 100m heat on Friday to qualify for the semi-finals.

More than half of the expected 5,000 doping tests at the Games have already been conducted, the International Testing Agency said on Friday.

The issue of doping had already come to the fore when U.S. swimmer Ryan Murphy on Friday said his 200m backstroke final was "probably not clean" following the loss of his title to the Russian Olympic Committee's Evgeny Rylov.

Murphy, who won three golds in Rio, however later backed away from any implication that his rivals had cheated.

"The Russian state and sport officials put the dark cloud over themselves and in the process, tragically, pushed their athletes out in the storm," Travis Tygart, the head of the United States Anti-Doping Agency told Reuters.

U.S. BMX racer Fields was moved out of intensive care after a night in the unit but remains in hospital.

"The doctors reported that Fields sustained a brain haemorrhage at the venue," USA Cycling said.

Organisers reported 21 new COVID-19 cases related to the Games, bringing the total to 241 since July 1, a miniscule number given the tens of thousands of people involved in the event.

COVID-19 infections have also risen, totalling 3,300 in Tokyo on Friday, after hitting a record 3,865 a day earlier, adding to the strain on the medical system.