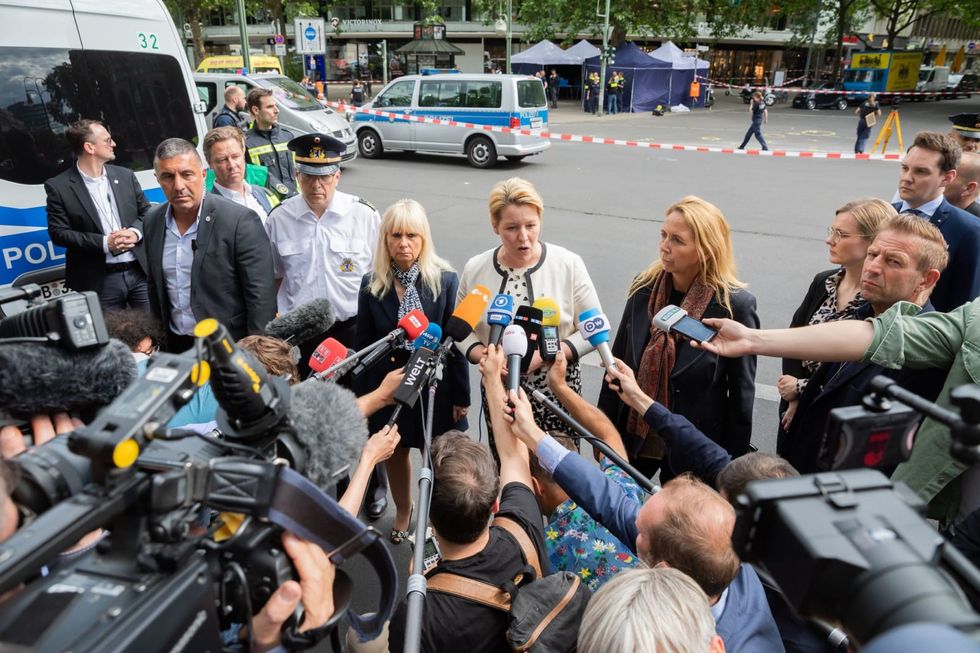 Franziska Giffey (C), Governing Mayor of Berlin, Iris Spranger (C-L), Berlin Senator for the Interior, and Barbara Slowik (C-R), Berlin Police Commissioner, speak to journalists at the scene of a fatal incident near the Memorial Church in Berlin. According to the fire brigade, one person was killed and at least eight injured after a car struck pedestrians in a busy shopping district in the German capital of Berlin on Wednesday. Christoph Soeder/dpa

A woman is dead and six people are in life-threatening condition after a car struck a school group in a busy shopping district in the German capital on Wednesday, fire officials said.

A 29-year-old German-Armenian man drove his Renault compact car onto the pavement of the west Berlin throughfare Kurfürstendamm and into a group of people at around 10:26 am (0826 GMT), police said.

The person killed was a teacher from the central German state of Hesse who was visiting the city with a school class. Some 10th grade pupils were among the pedestrians injured, along with another teacher, the Hessian state government said.

The tenth grade class was from Bad Arolsen in northern Hesse.

In all, six people were in critical condition, three were suffering from injuries described as serious, and several other were slightly wounded. The fire brigade did not give an exact number of victims or reveal more details about their identities.

The driver, who lives in Berlin, was detained shortly after the incident occurred. Police chief Barbara Slowik referred to him as a "suspect" who was now in hospital, but did not speak about a possible motive.

Posters with inscriptions were found in the car in addition to written documents stating views on Turkey, a top city security official, Iris Spranger, said.

She said the documents did not amount to a confession, denying what sources had previously told German media outlets, including dpa.

The man ploughed into the pedestrians on the pavement, then returned to the road before hitting a car and crashing into a nearby a perfume shop, police said. Afterwards a body could be seen lying near an an intersection.

A memorial to the victims is set for 7 pm (1700 GMT) at the historic Kaiser Wilhelm Memorial Church, near the scene of the crash.

A spokesperson for the fire brigade told dpa that a post had been set up at the church to provide psychosocial emergency care for witnesses.

Several hours after the incident, the Europacenter shopping centre was partially evacuated.

The reason was a closer examination of the perpetrator's car, which was parked opposite the large shopping centre on the other side of the street. It was purely a precautionary measure in case there was something dangerous in the car, the police said.

The location of the Wednesday morning incident was in the same area as an Islamist terrorist attack took place at a Berlin Christmas market there in 2016.

Tunisian national Anis Amri, a failed asylum seeker, drove a stolen lorry through the festive gathering in the square in front of the landmark church near Kurfürstendamm. Amri was shot dead in Italy several days after the attack.

Eleven people died in the immediate aftermath of the carnage, while another man who was severely injured died in October 2021. More than 70 people were injured.

The original driver of the truck was shot dead by the assailant in a hijacking hours before the market ramming.