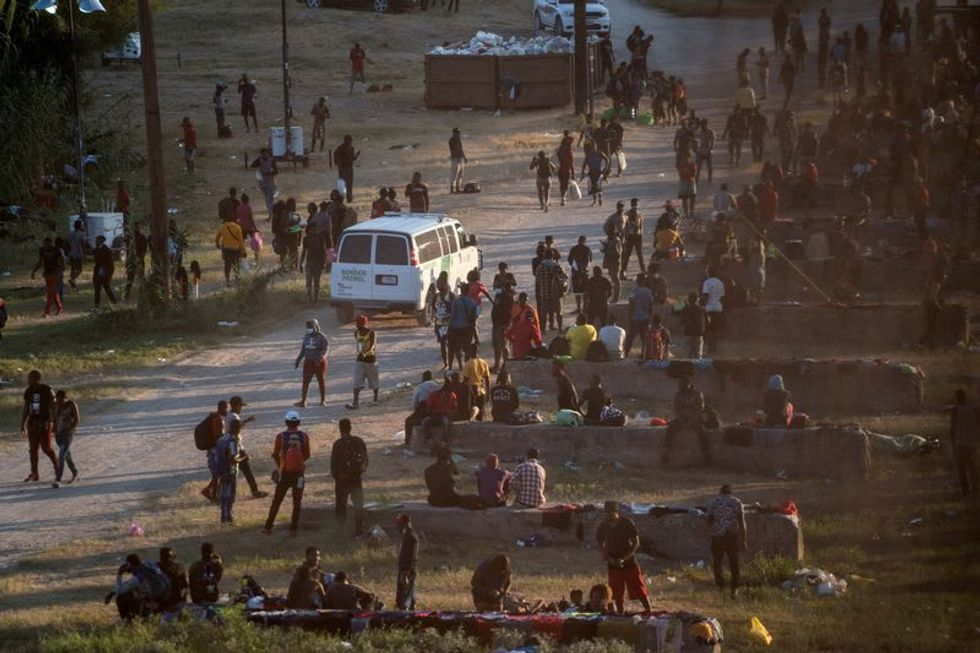 CIUDAD ACUÑA, Mexico (Reuters) -Haitians made up most of the over 10,000 migrants sleeping on the ground and desperate for food in a squalid camp under a bridge in southern Texas on Friday, in a growing humanitarian and political challenge for U.S. President Joe Biden.

The Haitians were joined by Cubans, Venezuelans and Nicaraguans under the Del Rio International Bridge connecting Mexico to south Texas. They slept under light blankets, while a few pitched small tents, with temperatures forecast to go above 100 degrees Fahrenheit (38 Celsius) in coming days.

Officials on both sides of the U.S.-Mexico border said most of the migrants were Haitians and more are expected to arrive. Most of the migrants Reuters spoke to had not come direct from Haiti but had made long and harrowing journeys through Mexico and Central and South America.

Several of them told Reuters they followed routes shared https://www.reuters.com/world/whatsapp-instructions-mexican-struggles-how-haitians-ended-up-texas-camp-2021-09-17 amongst each other on WhatsApp.

Del Rio Mayor Bruno Lozano said the number of migrants under the bridge that crosses into Mexico had jumped from 8,200 Thursday morning to 10,503 by Thursday evening. He said Friday he was ordering the bridge closed, but it was unclear if he had the authority to do so and traffic across the bridge continued.

In Ciudad Acuña in Mexico, across from Del Rio, two workers at the main bus terminal said at least two dozen buses full of Haitians had arrived Friday, with one putting the estimate of individual arrivals at around 1,100.

Reuters saw dozens of mostly Haitian migrants arriving at the terminal, carrying jugs of water, tightly-packed backpacks and folders where they had carefully stored travel documents, with many saying they soon planned to head across the shallow Rio Grande, which divides the United States and Mexico.

Most of the migrants at the Texas camp were men, but women nursing or carrying children also could be seen.

Ali Sajous, 29, a Haitian migrant, said U.S. officials were handing out numbers for immigration processing and she, her husband and two-year-old daughter who arrived Monday were No. 910 in the families line. Authorities were processing No. 685 at the time, she said.

Haiti, the poorest country in the Western Hemisphere, has a troubled history. In July, the president was assassinated amidst a rise in gang violence and in August a 7.2 magnitude earthquake and a powerful storm hit the country.

Many of the Haitians interviewed by Reuters said they used to live in South America, often Brazil or Chile, but decided to head north because they could not attain legal status or struggled to secure decent jobs. Some Haitians also said they were encouraged by videos they saw on social media about obtaining asylum in the United States.

Reuters witnessed hundreds of migrants wading through the knee-high Rio Grande back into Mexico to stock up on essentials they say they are not receiving on the American side.

Biden, a Democrat who took office in January, has pledged a more humane approach to immigration than that of former President Donald Trump. The situation in Del Rio is giving ammunition to critics who say Biden's policies have encouraged migrants.

Republican Texas Governor Greg Abbott, whose administration has arrested migrants for trespassing and is planning to build its own border wall after Biden halted Trump's signature project, said Thursday he would sign a law to increase border security funding in the state to $3 billion.

"We're trying to fix Biden's failure," he wrote in a tweet.

U.S. authorities arrested https://www.reuters.com/world/us/us-arrests-nearly-200000-migrants-us-mexico-border-august-2021-09-15 more than 195,000 migrants at the southwest border in August, according to government data released on Wednesday, a slight dip from the previous month but still around 20-year-highs.

While Biden rolled back many of Trump's immigration actions early in his presidency, he left in place a sweeping pandemic-era expulsion policy, called Title 42, under which most migrants caught crossing the U.S.-Mexico border are quickly turned back.

The policy issued by the U.S. Centers for Disease Control and Prevention has been criticized by pro-migrant groups and some Democrats as cutting off legal access to asylum. On Thursday, a U.S. federal judge ruled https://www.reuters.com/world/us/us-judge-blocks-expulsions-migrant-families-under-title-42-order-2021-09-16 the policy could no longer be applied to families.

The Biden administration on Friday appealed the judge's order https://www.reuters.com/world/us/biden-admin-looks-revive-trump-era-order-migrant-expulsion-2021-09-17, which had been set to take effect in two weeks.

While more than 90% of all single adults caught at the border from Mexico and Central America were quickly expelled under Title 42, less than 40% of single adults from other countries were expelled, according to U.S. Customs and Border Protection data from this fiscal year, which began last October.

Many of those who are not expelled hope to be released into the United States so they can apply for asylum, a long process due to a backlogged immigration court system.