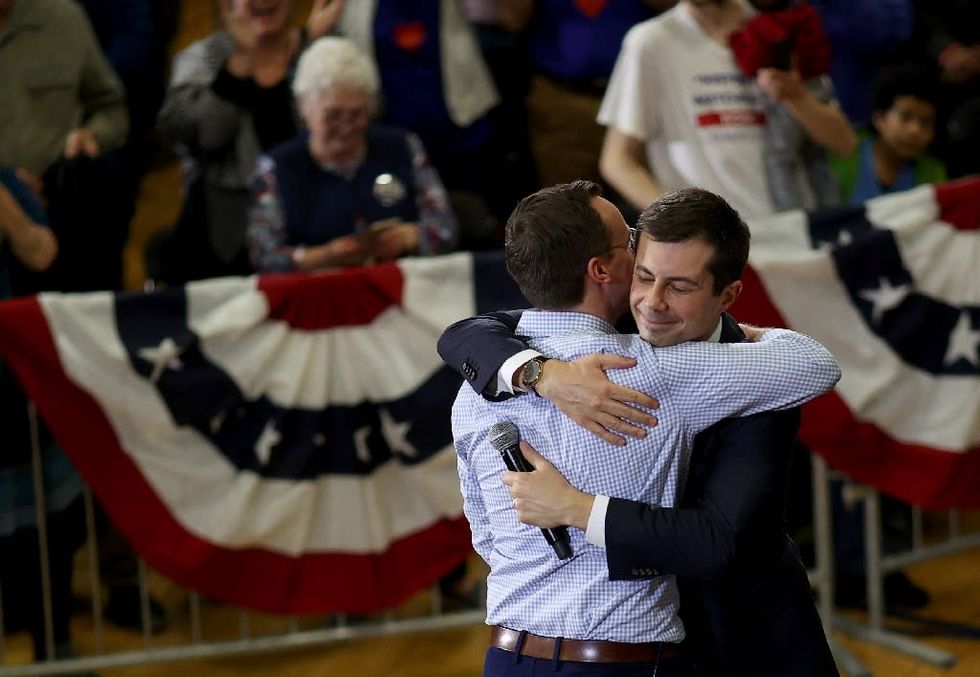 Pete Buttigieg hugs his husband, Chasten, in February 2020 during the Democratic presidential primaries

Pete Buttigieg, the first openly gay US cabinet member, and his husband on Saturday announced the arrival of their infant daughter and son.

A photo published on Twitter and Instagram shows Buttigieg, 39, and his spouse Chasten, 32, sitting in what appears to be a hospital room, each cradling a baby and smiling.

Chasten and I are beyond thankful for all the kind wishes since first sharing the news that we’re becoming parents.… https://t.co/Rh75JMKRmm
— Pete Buttigieg (@Pete Buttigieg) 1630767269.0

"Chasten and I are beyond thankful for all the kind wishes since first sharing the news that we're becoming parents," Buttigieg wrote. "We are delighted to welcome Penelope Rose and Joseph August Buttigieg to our family."

The Buttigieges announced in August that they had become parents. They didn't provide any details, but Chasten, a middle school teacher and author, told The Washington Post in July that the two were trying to adopt.

Saturday's photo received several hundred thousand likes on Twitter within just a few hours of its posting. Parents responded with humorous congratulations and photos of their own children.

Despite little prior name recognition and a short political resume, Buttigieg -- a former town mayor in the state of Indiana -- mounted a high-profile campaign for the Democratic presidential nomination during the last national election cycle, which saw Joe Biden prevail.

A former Navy intelligence officer who served in Afghanistan, Buttigieg earlier this year became "the first out LGBTQ person ever confirmed for a cabinet position," according to the Victory Institute, an LGBTQ advocacy organization.