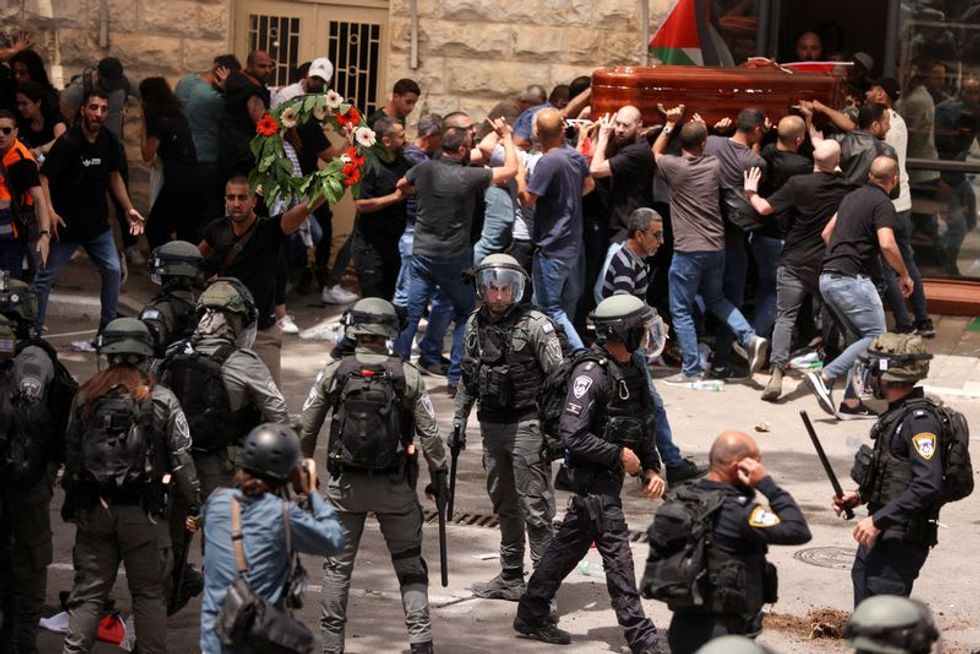 JERUSALEM (Reuters) - Israeli police clashed with Palestinian mourners packed around the coffin of killed Al Jazeera reporter Shireen Abu Akleh at the start of her funeral procession in Jerusalem on Friday.

Officers then charged the crowd and at one point the group carrying her coffin backed against a wall and almost dropped the casket, recovering it just before one end hit the ground.

The violent scenes underlined the growing anger over Abu Akleh's killing which has threatened to add further fuel to an already raging conflict.

Abu Akleh, who had covered Palestinian affairs and the Middle East for more than two decades, was shot while reporting on an Israeli raid in the occupied West Bank on Wednesday.

Palestinian authorities described Abu Akleh's killing as an assassination by Israeli forces. Israel's government initially suggested Palestinian fire might have been to blame, but officials have also said they could not rule out it was Israeli gunfire that killed her.

On Friday, Israeli police said the group of Palestinians they described as rioters had begun throwing stones in the hospital compound. "The policemen were forced to act," they added. There was no immediate comment from Palestinian authorities.

A few minutes later, Abu Akleh's coffin was placed in a vehicle that headed toward the Cathedral of the Annunciation of the Virgin in Jerusalem's Walled Old City, where the ceremony proceeded peacefully.

The Israeli military said on Friday that its initial investigation "concluded that it is not possible to unequivocally determine the source of the gunfire which hit and killed Ms. Abu Akleh."

The inquiry has raised two possibilities, the military said in a statement. The first, that Abu Akleh was hit by Palestinian militants who fired dozens of bullets toward Israeli military vehicles, "which is also the direction where Ms. Abu Akleh was".

The second, that an Israeli soldier returning fire from a jeep toward a gunman had inadvertently hit her. The vehicle was around 200 metres from Abu Akleh, the military said.

Israeli forces on Friday resumed raids on the outskirts of Jenin, where Abu Akleh was killed.

At least 13 people were wounded, the Palestinian Health Ministry said. The military said that an Israeli police officer had been seriously injured in what it said was counter-terrorism activity.

At least two of her colleagues who were with her said that they had come under Israeli sniper fire and that they were not close to militants.

Israel, which has voiced regret at Abu Akleh's death has proposed a joint investigation with the Palestinians, asking them to provide the bullet for examination.

The Palestinians have rejected the Israeli request. Palestinian President Mahmoud Abbas on Thursday said Israel was fully responsible and called for an international investigation.

Israel has stepped up raids amid deadly attacks in Israel. Since March, Palestinians and members of Israel's Arab minority have killed 18 people, including three police officers and a security guard, in attacks in Israel and the West Bank that have mostly targeted civilians.

Some of the assailants have come from the Jenin area. The Israeli arrest raids in the West Bank have often sparked clashes and have brought the number of Palestinians killed by Israeli forces or armed civilians since the beginning of the year to at least 42. The casualties include armed members of militant groups, lone assailants and bystanders.

(Reporting by Maayan Lubell in Jerusalem; Ali Sawafta in Ramallah and Nidal al-Mughrabi in Gaza; Editing by Nick Macfie and Andrew Heavens)