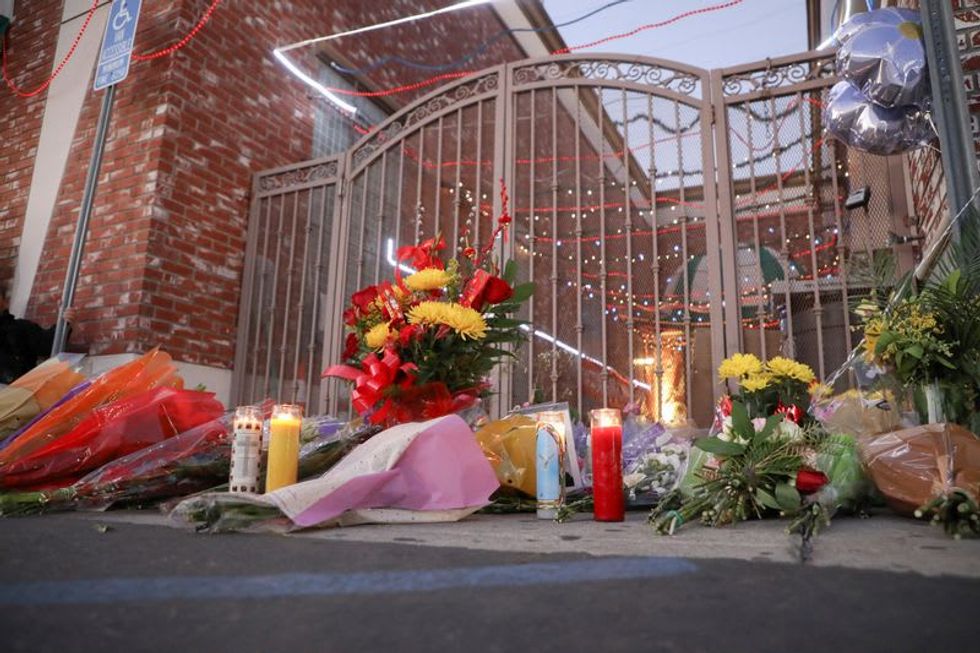 By Tim Reid and Rich McKay

MONTEREY PARK, Calif. (Reuters) -Investigators collected 42 bullet casings from the scene of one of California's bloodiest mass shootings as they sought clues on Monday to what drove an elderly gunman to open fire in a dance hall he had frequented, killing 11 people, before taking his own life.

Police identified Huu Can Tran, 72, as the lone suspect in a massacre that unfolded Saturday night in the midst of a Chinese Lunar New Year celebration in the town of Monterey Park, a hub of the Asian-American community just east of downtown Los Angeles.

Authorities said he drove to another dance hall where a second, would-be attack was thwarted and later shot himself to death in his parked getaway vehicle as police closed in to make an arrest on Sunday, ending an intense manhunt some 12 hours after the rampage.

Ten people were killed and 10 others wounded when Tran opened fire at the Star Ballroom Dance Studio, a venue popular with older patrons of Asian descent, then drove off. One of the victims hospitalized in critical condition died of his wounds on Monday, Monterey Park Police Chief Scott Wiese told reporters.

Even as Los Angeles-area police worked through a second full day of their investigation, seven people were reported slain in a separate, mass shooting in the northern California coastal town of Half Moon May on Monday.

In another incident, one person died and seven were injured in Oakland, near San Francisco, in a shooting between several individuals, Oakland Police Department reported.

At a news briefing on Monday, Hilda Solis, a member of the Los Angeles County Board of Supervisors, called Saturday's Monterey Park gun violence the deadliest mass shooting on record in Los Angeles County, the most populous in the United States and home to some 10 million residents.

About 20 minutes after the attack, Tran barged into a second dance club, the Lai Lai Ballroom & Studio in the neighboring community of Alhambra, where an employee wrestled away the intruder's semi-automatic assault-style pistol before any shots could be fired, officials said.

"That moment, it was primal instinct," Tsay recounted in a New York Times interview, saying that the gunman fled the scene after a 90-second struggle. "Something happened there. I don’t know what came over me."

Tran was not seen again until Sunday morning, when he had shot himself behind the wheel of his van, found parked in the city of Torrance, south of Los Angeles, as police surrounded his vehicle.

Luna said investigators, assisted by the FBI and the U.S. Bureau of Alcohol, Tobacco, Firearms and Explosives (ATF), had recovered 42 spent shell casings and a large-capacity ammunition magazine from the Star studio.

He said the search of the suspect's mobile home in a gated senior-living community in the town of Hemet, about 80 miles east of Los Angeles, turned up a rifle, various electronic devices and items "that lead us to believe the suspect was manufacturing homemade" weapons silencers.

Police also seized hundreds of rounds of ammunition from the dwelling, and a handgun was recovered from the white cargo van where the suspect took his own life, Luna said.

Authorities on Monday said a motive for the shooting remained a mystery.

Wiese said authorities were aware of unconfirmed reports that the violence may have been precipitated by jealousy or relationship issues, adding, "it's part of what our investigators are diligently looking into."

The sheriff said there was no immediate evidence that the gunman was related to any of his victims. Luna told reporters Tran had a "limited" past criminal history, including a 1990 arrest for unlawful possession of a firearm.

Hemet police said in a statement on Monday that Tran had come to the department twice in early January alleging "past fraud, theft and poisoning allegations involving his family" dating back 10 to 20 years, and had promised to return with documentation of his claims but never did.

Tran had an active trucking license and had owned a company called Tran's Trucking Inc with a post office box address in Monterey Park, according to online records.

He had lived in the Los Angeles area since at least the 1990s and moved to the mobile home in Hemet in 2020, address records showed. A neighbor in his gated community described him as "meek" in an interview Monday.

But Adam Hood, who rented a home from Tran in the Los Angeles area, told Reuters he knew his landlord to be an aggressive, suspicious person with few friends.

But Hood said Tran, with whom he often conversed in Mandarin, enjoyed ballroom dancing, and was a longtime patron of the Star Ballroom, though he complained that others there were talking behind his back.

"He was a good dancer in my opinion," Hood said. "But he was distrustful of the people at the studio, angry and distrustful. I think he just had enough."

The coroner's office on Monday confirmed the names of four victims, Valentino Alvero, 68 and three women - My Nhan, 65, Lilan Li, 63, and Xiujuan Yu, 57.