Putin signals era of Russia's cooperation with the West is over 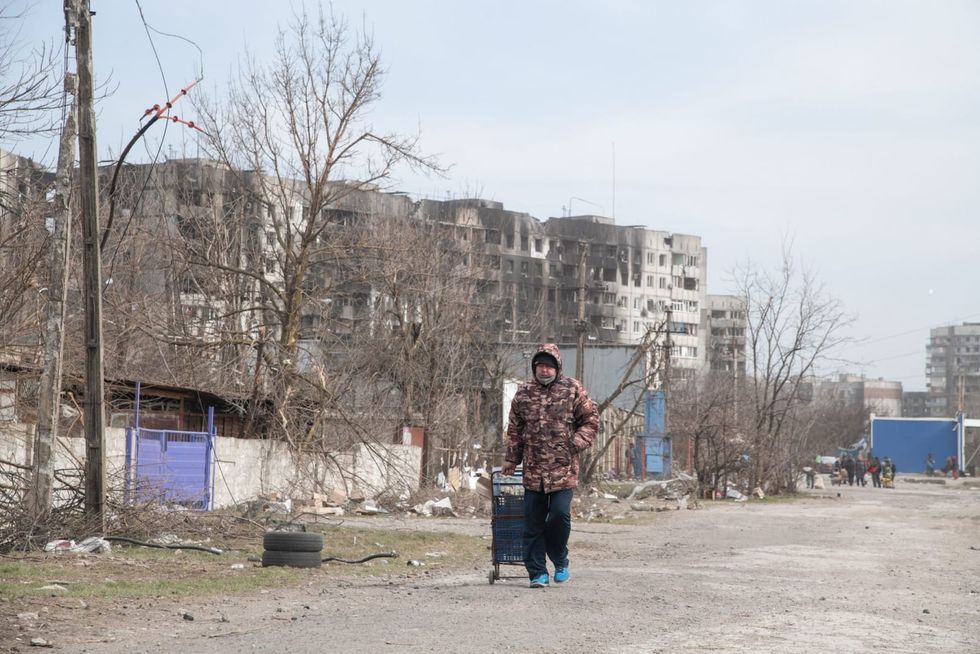 A woman makes her way out of Mariupol on foot after heavy bombardment left much of the city in ruins. The battel between Russian/Pro Russian forces and the defencing Ukrainian forces lead by Azov battalion continues in the port city of Mariupol. Maximilian Clarke/SOPA Images via ZUMA Press Wire/dpa

In a day of diplomatic efforts to end the war that were marred by numerous bad-tempered exchanges between Russia and the West, little progress appears to have been made amid continued fighting in Ukraine.

Russian President Vladimir Putin accused the West of looking for new pretexts for imposing sanctions on his country, adding that the West's unprecedented sanctions on Russia had all been prepared in advance and would have been implemented "in any case."

Signalling that Russia would never sacrifice its "national interests and traditional values," Putin said that while Russia wouldn't become a "closed country," there would be no more cooperation with Western companies in the near future.

The Kremlin also hit back on claims out of Washington and London that Putin was being misled or kept in the dark by his advisors.

Jeremy Fleming, the director of GCHQ, Britain's intelligence agency, also said that Putin's advisers were scared to tell the truth.

White House spokesperson Kate Bedingfield said on Wednesday that US had "information that Putin felt misled by the Russian military, which has resulted in persistent tension between Putin and his military leadership."

Throughout the day Moscow and Kiev traded accusations over incidents along Ukraine's Black Sea coast, with Russia accusing Ukraine of detaining 68 foreign ships near Odessa and threatening them with "immediate sinking" should they attempt to depart.

Ukraine for its part accused Russia of deploying 370 Ukrainian mines seized during its 2014 annexation of the Crimean Peninsula with the intention of tarnishing Ukraine's reputation. Both sides rejected the other's claims.

Meanwhile, French President Emmanuel Macron called for a longer ceasefire in the devastated Ukrainian city of Mariupol to allow humanitarian aid to reach residents in need, after a ceasefire lasting just a few hours on Thursday gave residents trapped in the city insufficient time to evacuate before fighting resumed.

The Ukrainian government had earlier dispatched a convoy of buses to the besieged city in the hopes of finally being able to evacuate civilians from the devastated port following an agreement for a temporary ceasefire between Russia and Ukraine.

Several previous civilian evacuation efforts have come to nothing amid a failure to agree on exit routes and timings.

From Kiev, Ukrainian President Volodymyr Zelensky continued his practice of speaking to world capitals by video link on Thursday.

In separate addresses to the parliaments of Australia, the Netherlands and Belgium, he called for more powerful sanctions on Russia and for all business with the country to be halted.

"Be ready to stop the import of energy from Russia so that billions are not poured into the war," he told lawmakers in The Hague.

He had earlier urged Australian lawmakers for more military help, which Australian Prime Minister Scott Morrison pledged to give.

In addressing the Belgian parliament, Zelensky singled out diamond traders in the country who were continuing to import gemstones from Russia, which remains legal under current sanctions.

For these people, Zelensky said, "diamonds, sometimes sold in Antwerp, are more important" than Ukraine's fight for freedom.

Britain on Thursday imposed sanctions on several Russians involved with state-run media. The measures were aimed at, among others, the former head of the Russian media regulator, Aleksandr Zharov, and the director of the RT channel, Alexei Nikolov.

The Russian Defence Ministry reported on Thursday its troops and allied separatist forces had advanced several more kilometres into areas of Donetsk and Luhansk, which together form the Donbass region.

This week the ministry said it was scaling back military activities near Kiev and Chernihiv in order to "complete the operation of the full liberation of the Donbass."

The claim of a drawdown, however limited, has been met with heavy scepticism in the United States and Europe.

"Russian units are not withdrawing, but repositioning," NATO Secretary General Jens Stoltenberg said on Thursday in Brussels, predicting that, even if Russia's aim was to reinforce its position in the Donbass region, offensive attacks would still take place on major cities.

A senior Pentagon official said on Thursday that the Ukrainian capital remained at high risk from airstrikes, describing Russia's talk of de-escalation as "nice rhetoric" but the reality was that Kiev was "still very much under threat."