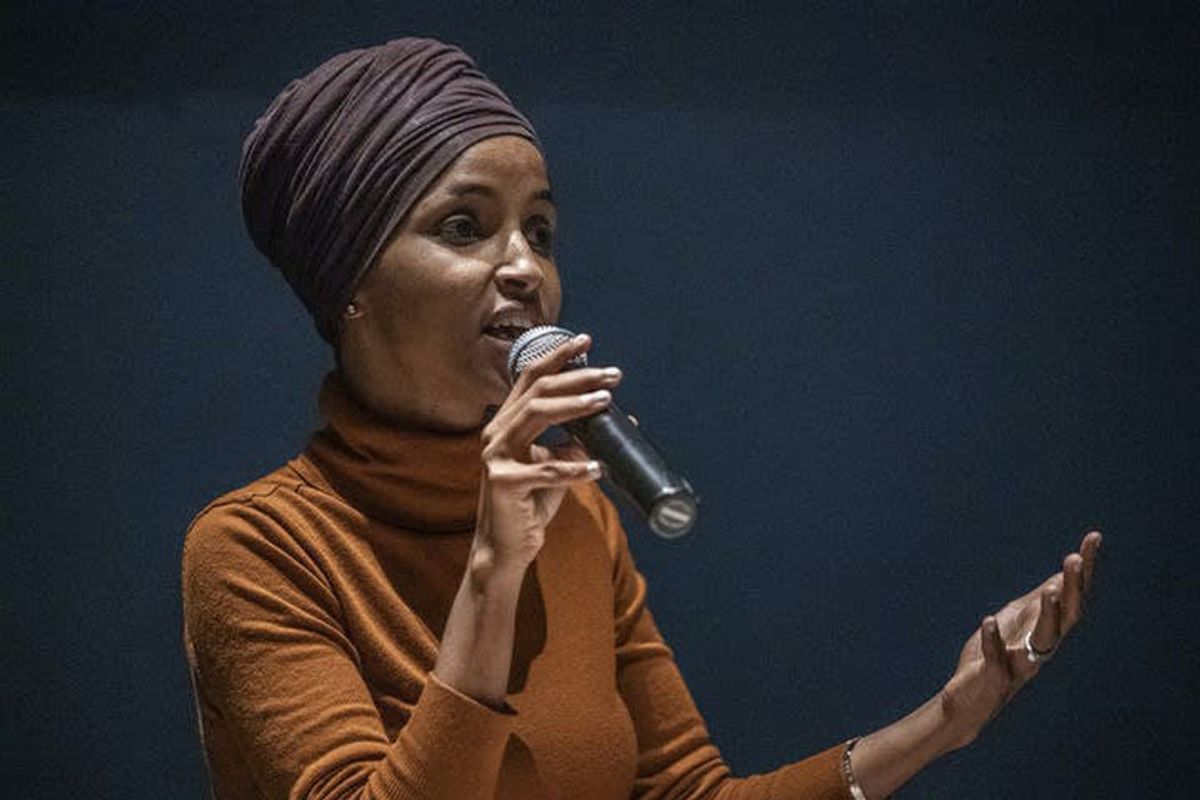 Congresswoman Ilhan Omar of Minnesota warned Sunday that conservative Democrats' ongoing effort to impose additional restrictions on eligibility for the new round of $1,400 direct payments comes at the risk of shedding progressive support for a final coronavirus relief package—votes that the party, clinging to narrow majorities in the House and Senate, can't afford to lose.

"Cutting the income cap will poison this bill," tweeted Omar (D-Minn.), the whip for the nearly 100-member Congressional Progressive Caucus (CPC). "It already lacks Republicans support and will lose progressive support. Democrats with a slim majority in the Congress can't pass this bill without progressives and must resist suggestions that will ultimately tank this relief bill."

"Cutting the income cap will poison this bill. It already lacks Republicans support and will lose progressive support."
—Rep. Ilhan OmarOmar was referring to ongoing talks among Senate Democrats over whether to lower the annual income cutoff for the new round of relief checks with the stated goal of ensuring the payments are more closely "targeted" to those in need. According to the Washington Post, top Democrats are currently weighing a plan under which only individuals earning $50,000 a year or less, heads of household earning $75,000 or less, and married couples earning a combined $100,000 or less would be eligible for full $1,400 payments.

A growing chorus of progressive lawmakers is strongly pushing back against that proposed eligibility framework, which could leave millions of struggling middle-class people with smaller checks or no payments at all.

"There are some Dems who want to lower the income eligibility for direct payments from $75,000 to $50,000 for individuals, and $150,000 to $100,000 for couples. In other words, working-class people who got checks from Trump would not get them from Biden. Brilliant!" Sen. Bernie Sanders (I-Vt.)—who along with Omar and others has been pushing for recurring relief payments for nearly a year—tweeted sardonically on Saturday night.

Rep. Alexandria Ocasio-Cortez (D-N.Y.), a CPC member, echoed the Vermont senator. "It would be outrageous if we ran on giving more relief and ended up doing the opposite," said Ocasio-Cortez. "It's sad that this is even an argument in the Dem party. Covid relief is disaster relief, and it's urgent."

To pass a coronavirus relief package through the reconciliation process without Republican support, the Senate Democratic caucus cannot afford a single defection. House Democrats, meanwhile, hold just a 10-seat majority, meaning that even a relatively small exodus of CPC members could imperil the coronavirus relief package—a state of affairs that potentially gives the chamber's progressive contingent significant leverage over the ongoing negotiations.

NBC News reported late last week that the eligibility framework remains a "live ball," with conservative and progressive members of the Democratic caucus publicly and privately battling over who should receive the new round of payments. President Joe Biden has said he is open to lowering the income cutoff for the checks, and discussed the possibility of narrowing eligibility with Sens. Chris Coons (D-Del.) and Tom Carper (D-Del.) at the White House last week.

Progressive activists and commentators have argued that in addition to being morally unjustifiable amid such a far-reaching economic collapse, limiting eligibility for the $1,400 payments would be politically "suicidal" and represent yet another retreat from the original campaign-trail promise of $2,000 relief checks that helped Democrats take control of the Senate.

"Let's be really, really clear. Doing this will cost Democrats control of the Congress in 2022 and the White House in 2024," Robert Cruickshank, campaign director at advocacy group Demand Progress, said last week. "There is nobody out there in America aside from a few wonks who want to limit these checks. It is a colossally bad idea."