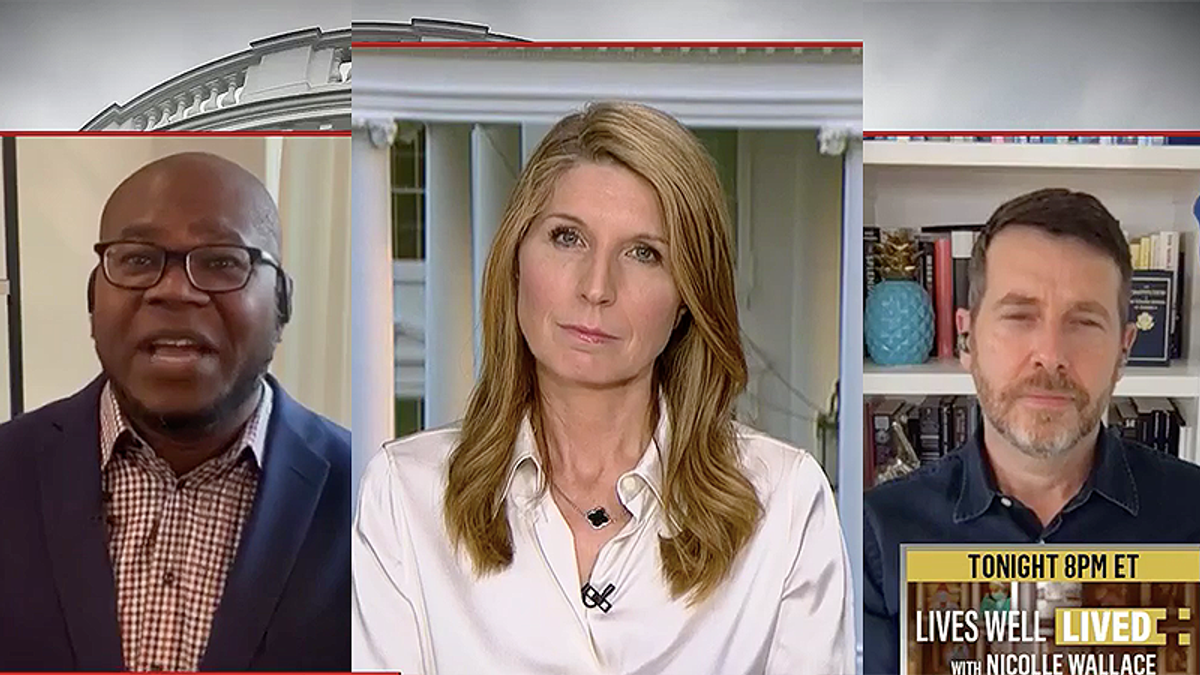 MSNBC's Nicolle Wallace brought up the recent claim by officials in former President Donald Trump's administration that they were to thank for the progress on the COVID-19 successes.

President Joe Biden, who has been in office for about 50 days, has ramped up production of the vaccine. According to the New York Times, Trump refused to buy extra doses of the vaccine from pharmaceutical companies when offered. When Biden came into office he purchased hundreds of millions of more vaccinations. When the FDA approved the Johnson & Johnson vaccine, Biden not only agreed to buy it, he deployed the Defense Production Act to get pharmaceutical giant Merc to help manufacture it.

Donald Trump's press list is morphing into what his twitter handle used to be. Just in: "If I wasn’t President, yo… https://t.co/f0GPYmemqh
— Cameron Joseph (@Cameron Joseph)1615421458.0

The political panel with Dr. Jason Johnson and David Plouffe explained that no Republicans supported the bill in the House or the Senate, but they'll later beg for funding from the bill for their districts. They'll then move to take credit for a bill they never supported.

Sen. Roger Wicker (R-MS) sang the praises of the bill's impact on restaurants and food service workers. Ironically, less than a month ago, he published a press release on his website saying the exact opposite, claiming it would hurt the restaurant industry.

Wicker's hypocrisy and lie about his support for the bill is only the beginning, the panel predicted.

"I guess I'm old enough to remember when Donald Trump went upstairs, put on his jammies and plunked down and did nothing as the country's president from election night until he was shuttled out of Washington, D.C. on Jan. 20," said Wallace. "What kind of credit do they think they're owed?"

Dr. Johnson argued that Trump did worse than veg-out in front of the television, he actually made things worse.

"If he had just gone upstairs and sat in his jammies, there would probably still be hundreds of thousands of people alive," Johnson explained. "He actually countered the value of getting vaccines. He actually countered what public health officials were trying to do. He caused some of the damage that we're facing today, in addition to when the initial research was being done for vaccines. He wanted to pick and choose which states got access to things as simple as ventilators. There's absolutely nobody from the previous administration who can take any sort of credit one way or another except maybe Dr. Fauci. Even Dr. Birx said, 'Yeah, I didn't quite do my job as well as possible.' It is a bizarre attempt to rewrite history, the likes we haven't seen since, oh, JAn. 6. For Republicans to try and take credit for what Joe Biden has clearly been doing since the moment he took office."

Plouffe agreed, saying that it's extremely difficult to get people to agree on things, but according to a Morning Consult poll, 75 percent of Americans support the stimulus.

"Anything these days to get 75 percent is unusual," said Plouffe. "But usually it's things that aren't happening right in front of you. Usually, a debate in Congress makes things split. I look back at 2009 when President Obama and Vice President Biden made the decision to rescue the American auto industry. That was pulling in about 15 percent approval. Yet, by 2012 it was one of the reasons why President Obama won re-election. This is starting at a high watermark, and I think the Biden administration and Democrats clearly intend to narrate the benefits along the way here."

Meanwhile, he said, Republicans are trying to start "fake fights about Dr. Seuss, supporting efforts to make it harder for everyone to vote in this country and standing in the way of COVID relief."

He recalled that last year at this time, Trump was saying that the virus was going to go away when it got warm and it would disappear.

"So, there's nobody in American history who's handled a crisis more poorly than Donald Trump," continued Plouffe. "It's one of the reasons he's a one-term president. I think those numbers are startling, and it just speaks to no matter what happens in Washington, in towns all across the country, people are hurting. They're hurting so badly not just health, but economic toll. People are desperately saying, 'Yes, we need the help.'"