Russia and U.S. reported to be talking as Zelenskiy celebrates big victory in Ukraine 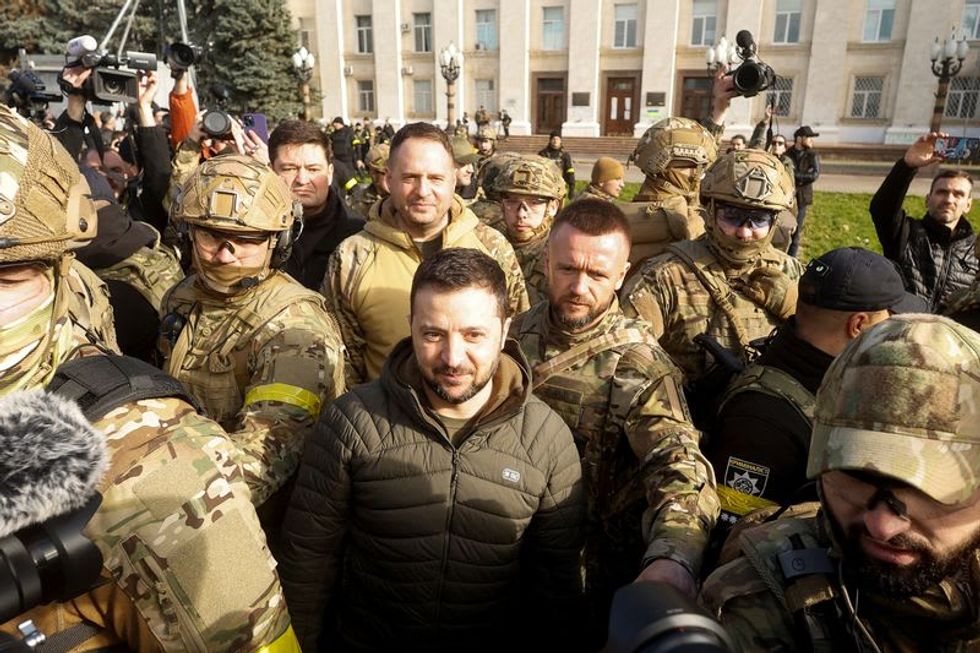 By Jonathan Landay and Jonathan Spicer

KHERSON, Ukraine/ANKARA (Reuters) -Russian and U.S. officials were reported on Monday to be holding talks in Turkey, as Ukrainian President Volodymyr Zelenskiy visited Kherson, the biggest prize his troops have won so far, and vowed to press on recapturing all occupied lands.

The Russian newspaper Kommersant cited a source as saying delegates from Washington were meeting on Monday in the Turkish capital Ankara with Russian delegates reportedly including Sergei Naryshkin, head of the SVR foreign intelligence agency.

The Kremlin said it could neither confirm nor deny the report and a Turkish official declined comment. Flight-tracking data showed a Russian plane had landed in Ankara which Yoruk Isik, an Istanbul-based geopolitical analyst at the Bosphorus Observer consultancy, said was only used by top officials.

Face-to-face meetings between Russia and the United States at high level have rarely been reported in recent months, though Washington said last week that contacts had taken place to lower the risk of a broader war, without giving details. Defence ministers of the two countries spoke by phone last month.

Russian forces fled Kherson last week in their third major retreat since invading Ukraine in February, and the first time they have abandoned such a large city.

"You see our strong army. We are step by step coming through our country, the temporarily occupied territories," Zelenskiy told reporters after addressing troops in front of the administration building in the main square, where residents had also turned out, some with children or baby strollers, some waving Ukrainian flags or draped in them.

"We are ready for peace - but our peace... For all our country, all our territory," he said. Minutes before he arrived, nearby shelling could be heard, and after he finished speaking several more blasts of artillery echoed over the city.

Kherson was one of four provinces that Russian President Vladimir Putin declared annexed last month and said would be part of Russia forever. The loss of the regional capital is a major psychological and strategic blow for Moscow.

Zelenskyi said Russian occupiers had committed war crimes, including killings and abductions. They left destroyed infrastructure and land mines littered behind them when they withdrew across the Dnipro River.

"Bodies of dead civilians and servicemen have been found," he said an overnight televised address, saying investigators had already documented more than 400 Russian war crimes in the area. "The Russian army left behind the same savagery it did in other regions of the country it entered."

Russia denies its troops target civilians or have committed atrocities in occupied areas. Mass burial sites have been found in other parts of Ukraine previously occupied by Russian troops, including some with civilian bodies showing signs of torture.

Residents in and around Kherson interviewed by Reuters since Friday have described killings and abductions under Russian occupation.

Russian soldiers "would approach you in the street and ask if you were Ukrainian or Russian. If you said Ukrainian, they would take you away," Natalia Papernaya, a 43-year-old clothing designer, said on Sunday.

The Russians, she said, had arrested her friend for photographing a neighbour's home to reassure the owners it had survived a nearby shell blast. The troops had taped her friend's hood over her eyes, put her in a cellar for a day and demanded to know for whom she was taking pictures.

The friend was unharmed but heard other detainees screaming or shouting out praise for Putin under duress.

"There were many people in there, women and men," she said.

Yana Shaposhnikova, 36, another clothing designer, said a friend of hers had also been abducted and interrogated. She herself had buried her yellow and blue Ukrainian flag.

"If you wore anything yellow and blue you could be shot or invited into a cellar where you would be tortured," she said.

Earlier, Reuters reported one account of a neighbour shot dead and three accounts of people carried off by troops in the village of Blahodatne north of Kherson.

It was not possible to verify the accounts independently.

PUTIN STAYS AWAY FROM G20

Putin stayed away from a summit of the G20 big economies in Indonesia, sending his foreign minister, Sergei Lavrov, in his place. Reports that Lavrov was taken to a hospital caused speculation about his health, denied by Moscow.

The governor of Bali, I Wayan Koster, told Reuters Lavrov, 72, had gone to a hospital for a "check-up" but was in good health. Russia released a video showing Lavrov sitting outside in shorts and a T-shirt, denying he was ill.

Russia pulled all its troops out of a pocket on the west bank of the Dnipro River last week, which included Kherson city. Ukraine's military said the Russians were continuing to shell the area from across the river.

Regional governor Yaroslav Yanushevych said the city would be sealed off for a few days for security. He and Zelenskiy warned Kherson residents about Russian mines.

Russia's defence ministry was quoted by RIA as saying that its forces had taken the village of Pavlivka in Donetsk.