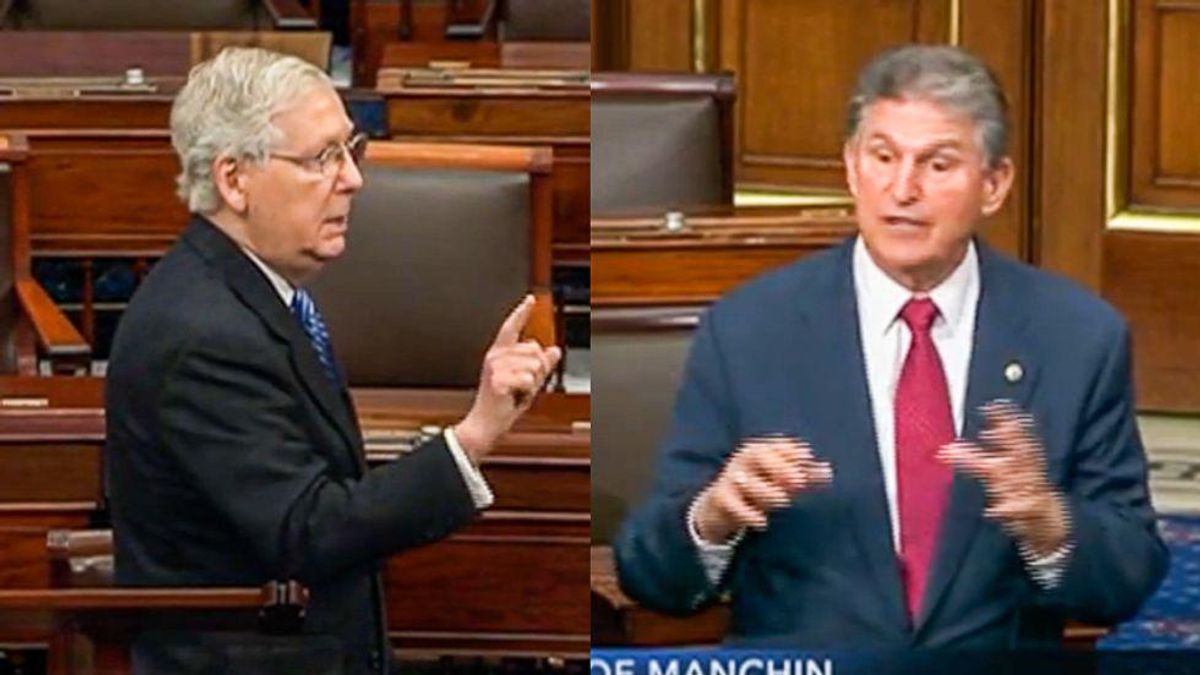 As the Senate Rules Committee convened Tuesday to mark up a sweeping legislative proposal aimed at protecting and expanding voting rights, progressive activists ramped up pressure on the chamber's Democrats to eliminate an archaic procedural rule that poses a critical threat to the bill's chances of becoming law.

The For the People Act (pdf), or S.1, would overhaul the U.S. election system by increasing ballot access through automatic voter registration and other measures, limiting the ability of states to purge voter rolls, restoring voting rights to people who have completed felony sentences, and establishing a publicly financed small-dollar donation matching system for candidates who reject high-dollar contributions.

Despite the bill's bipartisan popularity among the U.S. electorate, the legislation faces long odds in the Senate due to the opposition of every Republican in the chamber as well as Sen. Joe Manchin (D-W.Va.), the only Democratic senator who has yet to co-sponsor the For the People Act.

Another major obstacle is the legislative filibuster, a Senate rule that effectively requires 60 votes for most legislation to pass. With the filibuster in place, Senate Democrats would have to convince Manchin and 10 Republicans to support S.1—a virtual impossibility given the GOP's vocal denunciations of the bill, which passed the House by a party-line vote in March.

Senate Minority Leader Mitch McConnell (R-Ky.) has made clear that one of his top priorities of the legislative session is defeating the voting rights measure—an objective he shares with Koch-funded dark money organizations whose secrecy would be jeopardized by passage of the For the People Act, which calls for stricter financial disclosure laws.

"Senate Republicans are hell-bent on blocking the For the People Act and plan to use the filibuster to prevent this popular bill from even getting an up-or-down-vote," Eli Zupnick, spokesperson for advocacy group Fix Our Senate, said in a statement Tuesday. "With Republican state legislatures across the country passing massive anti-voting bills there is no time to waste trying to bring ten Republicans on board a bill that Sen. McConnell will never allow his caucus to support."

"This is about to move from an abstract conversation about Senate rules to a very clear choice for Senate Democrats: Protect the 'Jim Crow' filibuster or protect American democracy—they won't be able to do both," Zupnick added.

Ahead of Monday's hearing, Senate Democrats enacted several tweaks to S.1 in an effort to assuage state and local election administrators concerned about implementing the bill's early voting and voter registration provisions.

As the Washington Post reported last week, "Among the latest changes is a tweak to one of the bill's key mandates, requiring states to provide at least 15 consecutive days of early voting, with polls open at least 10 hours a day. The revisions now provide limited exemptions for jurisdictions with fewer than 3,000 registered voters, as well as those jurisdictions that mail ballots automatically to all voters."

"The changes also loosen a requirement that early voting be offered on the Monday before Election Day," the Post noted. "After some officials raised concerns about the administrative burdens, Monday voting would now become optional, though jurisdictions would still have to meet the 15-consecutive-day rule."

It's unclear whether any of the changes to the bill will be enough to sway Manchin, let alone Republican senators. In a March statement, Manchin said Senate Democrats "must work toward a bipartisan solution" on voting rights.

Tuesday's Senate Rules Committee hearing on S.1 came as Republicans across the nation—from Texas to Florida to Georgia to Iowa—continued rushing ahead with hundreds of bills that would restrict ballot access by imposing voter ID requirements, rolling back mail-in voting, and curbing the use of drop boxes.

"Here in the 21st century, we are witnessing an attempt at the greatest contraction of voting rights since the end of Reconstruction and the beginning of Jim Crow," Senate Majority Leader Chuck Schumer (D-N.Y.) said Tuesday during the committee mark-up, a crucial step toward bringing the bill to the floor for a final vote.

"The bill before this committee has a very simple premise: make it easier—not harder—to vote," Schumer continued. "S.1 would nullify many of these voter suppression laws and protect the rights of American voters, whether they cast their ballots for Democrats or Republicans."

In an interview last month, Schumer said that failure to pass S.1 is "not an option" and that "everything will be on the table to get it done."

Ellen Sciales, press secretary for the youth-led Sunrise Movement, said Tuesday that "unless he's lying to us, this means Senator Schumer must commit to abolishing the filibuster and pass the For the People Act swiftly and urgently."

Eliminating the filibuster would require the support of every member of the Senate Democratic caucus and a tie-breaking vote from Vice President Kamala Harris—a level of support Democrats don't currently have, due to opposition from Manchin and Sen. Kyrsten Sinema (D-Ariz.).

"If Schumer doesn't act on this now, the opportunity may never come back when Black and brown Americans, young people, working people are turned away in droves from their polling places in 2022, 2024, and beyond," said Sciales. "Democrats need to treat this like an existential threat to the future of governance and a functioning democracy."