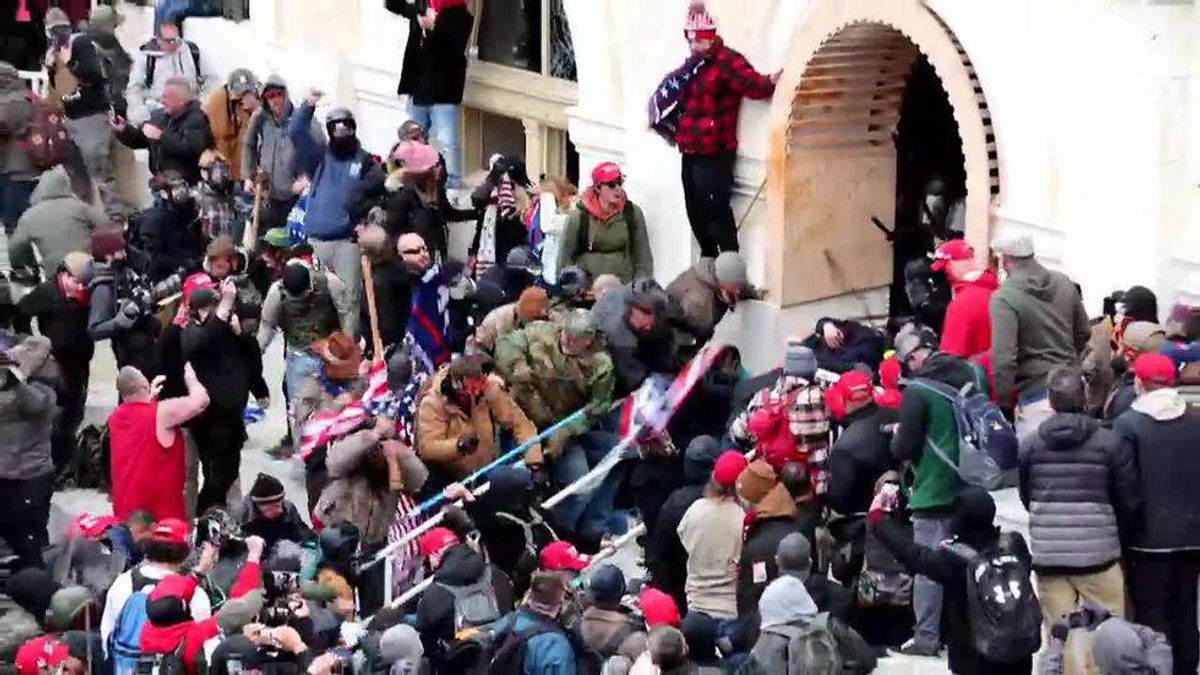 A 26-year-old man identified by the FBI as a leader of the Proud Boys in New Jersey laid out his participation in the January 6 Capitol riot to his mother and associates, according to FBI charging documents released in his arrest today.

Shawn Price, 26, of Rockaway, New Jersey, is charged with federal offenses that include violent entry and disorderly conduct on Capitol grounds; obstruction of law enforcement during a civil disorder; and obstruction of justice, according to the FBI. The feds said also that Price was heavily involved in November and December events related to Proud Boys protest and violence.

"Price messaged a Facebook user L.H.P., who law enforcement understands to be Price's mother," the FBI report said. His posts included language not everyone shares with Mom.

Here is some of their January 6 conversation during the riot:

L.H.P.: You ok. I just saw(w) they stormed the capital

PRICE: I led the storm!

L.H.P.: Did you get inside? I saw some did
L.H.P.: I also read they will arrest anyone on the street after 6pm
L.H.P.: National guards on the way
PRICE: They are already here and yes i did after getting tear gassed pepper sprayed and shot with rubber bullets

The FBI states that Price sent L.H.P. a video taken from the Capitol plaza showing law enforcement officers deploying chemical irritant and impact ordinance into the crowd in his direction. In this video, from which the below images were taken, Price is yelling "Look at what these fucking scumbags are doing! Look at that shit! Look at that shit!"

L.H.P.: When are you heading home
PRICE: They just shot and killed 2 people in front of us
L.H.P.: You need to get out of there
L.H.P.: Get out now anyone even in a car will be arrested after 6pm
PRICE: I know there is a militia of 3000 men on the way in to take over the captiol its going to get crazy were gathering everyone now

PRICE: And getying out
L.H.P.: Ok let me know when your out of the city
L.H.P.: Its insane
PRICE: I need milk and some kind of remedy for pepper spray
L.H.P.: Milk will only help of it was actual pepper spray not tear gas
L.H.P.: Try washing them with baby shampoo
L.H.P.: And water
L.H.P.: Mostly water in the eyes. Baby shampoo or dawn mixed with water for the skin around the area
L.H.P.: Did you make it out
PRICE: Yea
L.H.P.: OK good

An FBI news release stated that "Price is a member of the Proud Boys, a group self-described as a "pro-Western fraternal organization for men who refuse to apologize for creating the modern world; aka Western Chauvinists." As alleged, Price held a leadership position in the northern New Jersey chapter and attended multiple events and rallies from November 2020 to January 2021.

Here's one excerpt from the FBI report describing December violence that it said Price was part of:

You can read the FBI report here.