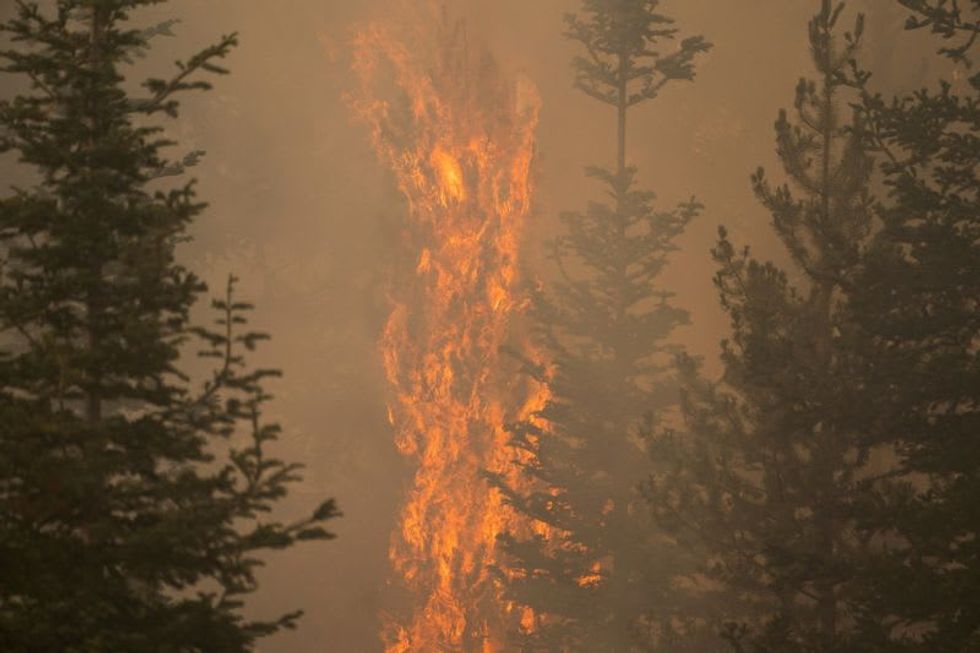 (Reuters) - Scores of wildfires raging across the Western United States' forest and scrub have belched so much smoke that it is helping an army of firefighters gain ground on the nation's biggest blaze, Oregon's Bootleg fire, by blocking sunlight, officials said on Saturday.

Both the National Weather Service and officials with the Oregon Department of Forestry said smoke in the lower atmosphere coming from California wildfires has floated over the Bootleg fire, which has scorched more than 401,000 acres in Oregon about 250 miles (402 km) south of Portland.

"It's called 'smoke shading' and it's basically put a lid on the lower atmosphere for now, blocking sunlight and creating cooler, more stable surface conditions," said Eric Schoening, a meteorologist with the National Weather Service in Salt Lake City.

The phenomenon is unpredictable and the area is still under red-flag warnings this weekend from the NWS, which said the Pacific Northwest may experience high temperatures and wind gusts that can fan the flames and spread hot sparks and embers.

Schoening said the weather is a "mixed bag" in terms of helping firefighters.

Marcus Kauffman, a spokesman for the Oregon Department of Forestry, said the drawback of the "smoke shade" is that it makes it harder to fly planes and helicopters that drop water and chemical fire suppressants even "while it helps the teams on the ground."

An army of more than 2,000 firefighters and support crews had contained about 42% percent of the fire by Saturday, although the fire jumped containment lines the night before, he said.

The Bootleg fire is one of more than 80 large active wildfires in 13 states that have charred about 1.3 million acres (526,090 hectares) in recent weeks, an area larger than Delaware, according to the National Interagency Fire Center (NIFC) in Boise, Idaho.

The smoke, even as it provides some help to Oregon firefighters, has recently been carried by the jet stream and other air currents as far as the Northeastern cities of New York and Boston, where some residents have felt the air contamination in their eyes, noses and lungs.

(Reporting by Rich McKay in Atlanta; Editing by Matthew Lewis)