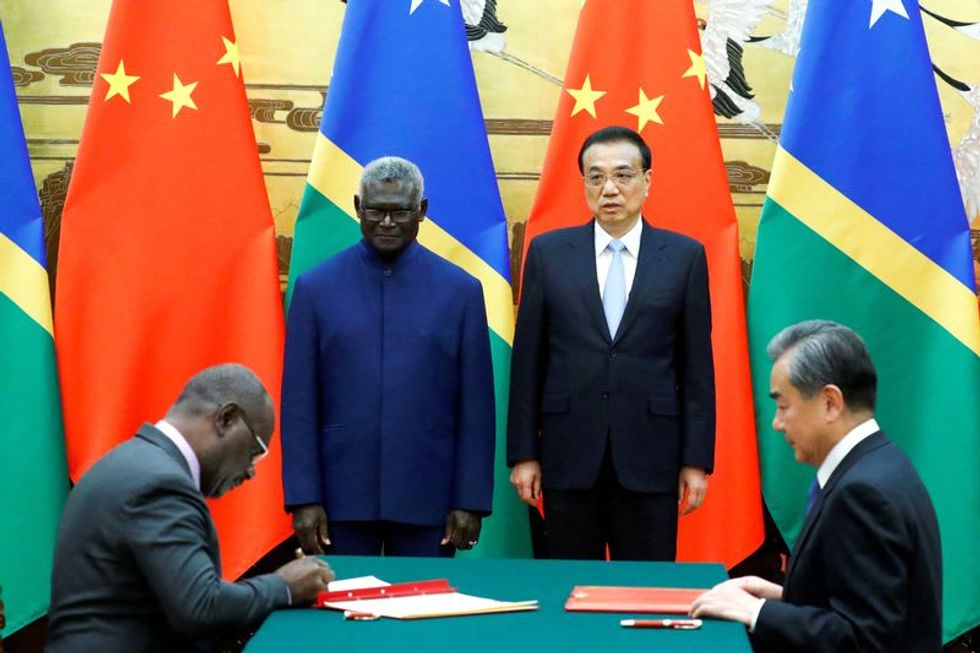 By Kirsty Needham and and Lucy Craymer

SYDNEY (Reuters) -The Solomon Islands' decision to sign a security pact with China will not hurt or undermine peace and harmony in the region, Prime Minister Manasseh Sogavare told parliament on Wednesday.

Sogavare confirmed the pact had been signed by foreign ministers from the two countries, a day after China announced the signing at a regular news briefing in Beijing.

The move, days before a White House delegation, including Indo Pacific Coordinator Kurt Campbell, is to arrive in Honiara, has heightened concerns in Canberra about the potential for a Chinese military presence less than 2,000 kilometres away.

New Zealand’s foreign minister, Nanaia Mahuta, said on Wednesday that New Zealand had made clear to both the Solomon Islands and China its grave concerns at the pact's potential to destabilise the Pacific region.

New Zealand Prime Minister Jacinda Ardern said the Solomon Islands were breaching an agreement within the main regional grouping, the Pacific Island Forum, for nations to discuss defence matters with the group before making major decisions.

"We are concerned about the militarisation of the Pacific and we continue to call on the Solomons to work with the Pacific with any concerns around their security they may have," Ardern told New Zealand media outlet Stuff.co.nz.

The United States, Japan, New Zealand and Australia shared concerns about the Solomon Islands security pact with China "and its serious risks to a free and open Indo-Pacific", the White House said earlier in a statement, after officials met in Honolulu.

Sogavare said the pact would be disclosed after a "process", adding the security cooperation with China was not directed at any countries or external alliances, "rather at our own internal security situation".

"I ask all our neighbours, friends and partners to respect the sovereign interests of the Solomon Islands on the assurance that the decision will not adversely impact or undermine the peace and harmony of our region," he said.

A leaked draft included provisions for Chinese police to maintain social order, and for Chinese naval vessels to replenish in the Solomon Islands, alarming Australia.

Sogavare told parliament a day earlier the pact would not allow a Chinese military base, and said on Wednesday the security pact allows for the protection of infrastructure, after riots in November saw buildings torched and lives lost.

Australia's Prime Minister Scott Morrison, in the middle of a national election campaign, has been criticised by the opposition Labor party over what they call the largest diplomatic failure in the Pacific since World War 2.

Opposition Labor leader Anthony Albanese said that it was clear "relationships have broken down" between Australia and Sogavare, and that the Morrison government should have been engaging more deeply for longer.

Morrison said on Wednesday that Australia had communicated its position to Sogavare clearly but hadn't sent the foreign minister because it did not want to tell Pacific islands what to do.

Deputy Prime Minister Barnaby Joyce, leader of Morrison's junior coalition partner, warned China could use the security deal to push for a military base. "We don't want our own little Cuba off our coast," Joyce said.

Australia has provided policing support to Honiara, a Pacific island neighbour, under a bilateral security treaty signed in 2017, and an earlier regional policing mission.

Australia's Minister for International Development and Pacific Zed Seselja had met with Sogavare last week to urge him not to sign the pact with China, and in a joint statement with on Tuesday evening said Australia was "deeply disappointed".

(Reporting by Kirsty Needham in Sydney and Lucy Craymer in Wellington; Editing by Tom Hogue and Gerry Doyle)