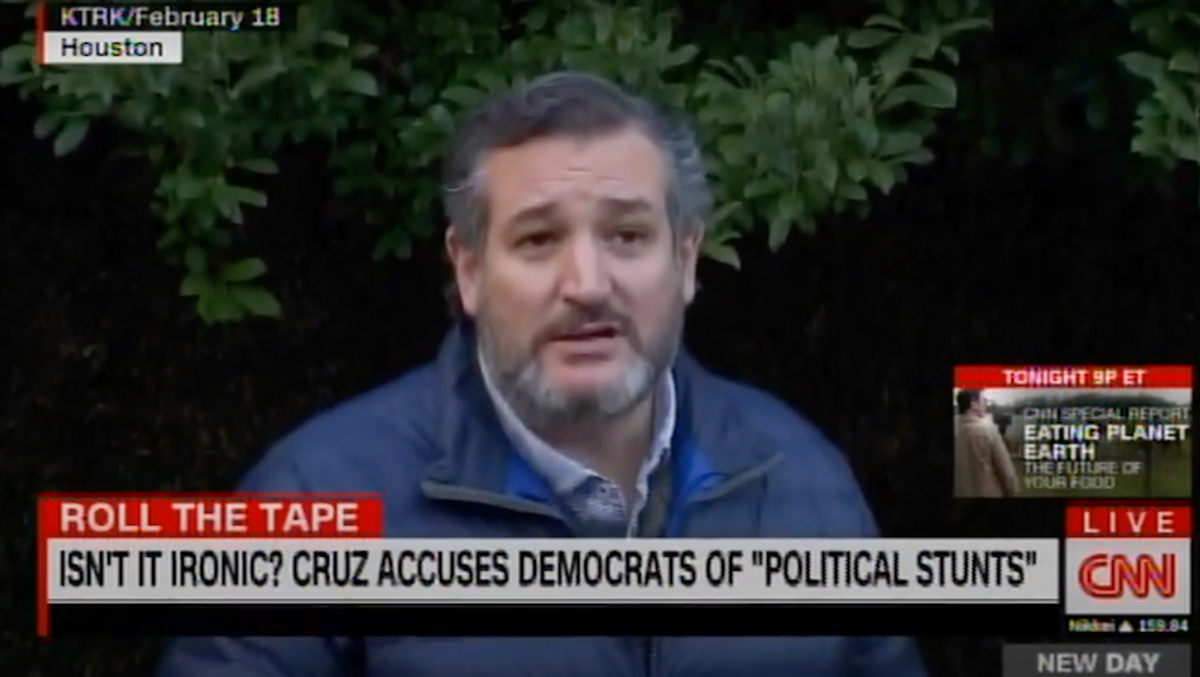 After playing a clip of Cruz calling the trip a "political stunt," Keilar said: "Now, love or hate this sojourn by Texas state Democrats, the last person who should be chiming in about political stunts is Ted Cruz.

"It's like a black fly in your chardonnay or a death row pardon two minutes too late. But then Cruz must have missed track 10 on the 1995 masterpiece 'Jagged Little Pill,'" Keilar added, before playing clips of Cruz reading from Dr. Seuss' "Green Eggs and Ham" on the Senate floor and filming himself narrating in some brush near the Rio Grande at the Texas-Mexico border.

In what some might call a low-blow, Keilar even threw in a clip of Cruz introducing Carly Fiorina as his vice presidential nominee in 2016.

"That last scene was a desperate attempt to save the Republican nomination from Donald Trump," she said, adding that Cruz dropped out of the race a few days later.

Next, she played a clip of Cruz's recent interview with Harris Faulkner, in which the Fox News host criticized state Democratic lawmakers because real Texans "don't cut and run."

"Real Texans don't cut and run, unless of course there's an historic winter storm leaving millions without power in your state, and you really want to escape that freak deep freeze to go on a Griswold-style family vacation to Cancun," Keilar said, showing well-known images of Cruz with his luggage at the Houston airport. "It's not like Cruz cut and ran for a reason related to politics or policy, he left for pina coladas. So maybe the guy with this much baggage on the topic, certainly more than an overnight bag, should sit this one out."

Finally, Keilar played a clip of Cruz calling it "karma" that some Texas Democrats contracted COVID-19 after leaving the state.

"Karma may be alive, but for Ted Cruz, irony is apparently dead," Keilar said.

"Check yourself before you wreck yourself," co-host John Avlon added.