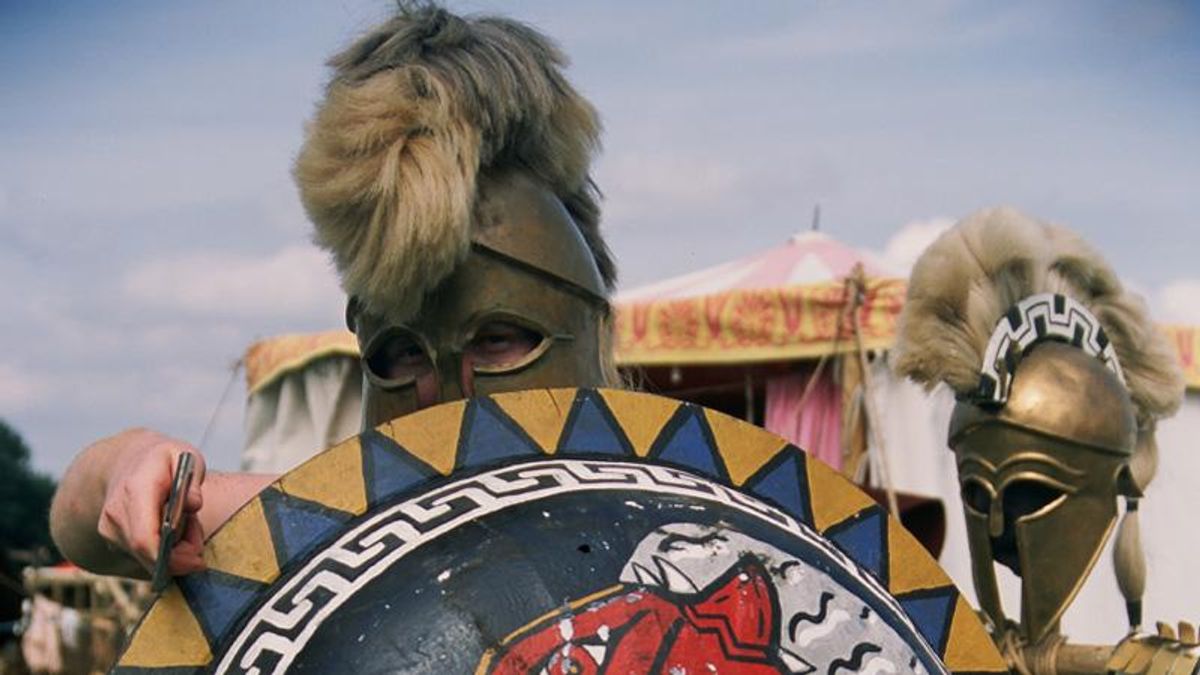 Ancient historians loved to write about warfare and famous battles. While these millennia-old stories still feed modern imaginations – Homer's “Iliad" provides the plot for the movie “Troy," while Herodotus' “Histories Book VII" inspired the film “300," for instance – there's rarely any physical evidence that the events they describe really happened.

But in 2008 a team of Italian archaeologists began to excavate outside the ancient city wall at Himera, a Greek colony on the north-central coast of Sicily, Italy. In the western necropolis, or cemetery, they found several mass graves dating to the early fifth century B.C. All the individuals in the graves were male, and many had violent trauma or even weapons lodged in their bones. 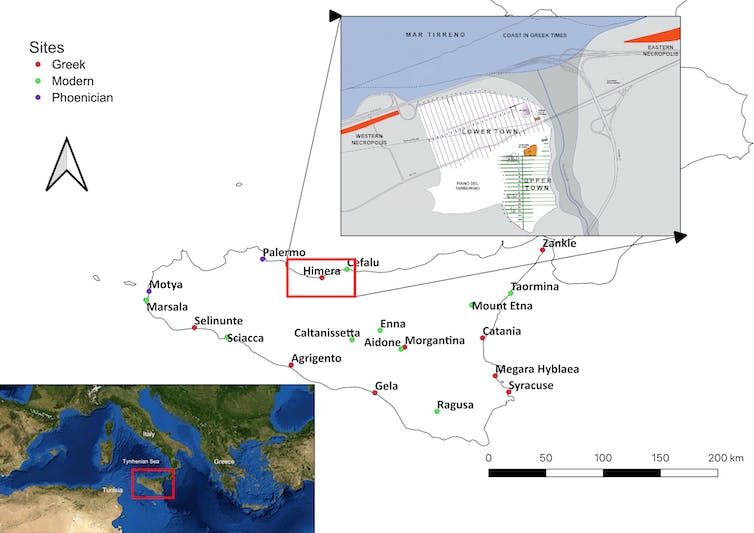 A plan of the Greek colony town of Himera, its location in Sicily among other sites and within the larger Mediterranean. The mass graves were found in the western necropolis. (Reinberger KL, Reitsema LJ, Kyle B, Vassallo S, Kamenov G, Krigbaum J (2021) Isotopic evidence for geographic heterogeneity in Ancient Greek military forces. PLoS ONE 16(5): e0248803., CC BY)

The evidence strongly suggests these men could have been soldiers who fought in 480 B.C. and 409 B.C. in the Battles of Himera, written about by ancient Greek historians. I'm part of an interdisciplinary team of anthropologists, archaeologists and geologists who analyzed the teeth of these people who lived more than 2,400 years ago to figure out who they were and where they came from. It looks like early historians didn't pass down the whole story, and our findings might rewrite parts of what's known about Greek military history.

A chance to fact-check ancient history

Herodotus and another historian, Diodorus Siculus, both wrote about the Battles of Himera. They describe the first battle in 480 B.C. as a victory of an alliance of Greeks from all across Sicily over an invading Carthaginian force from modern-day Tunisia. Three generations later, the second battle in 409 B.C. was more chaotic. The historians report that Carthage besieged the city of Himera, which this time had little outside assistance.

These ancient accounts tell of grand generals, political alliances and sneaky military tactics such as the Greek cavalry who pretended to be friendly aid to get into the Carthaginian camp.

The 21st-century discovery of what looked like the remains of soldiers from around the times of these two famous battles provided a rare opportunity. Once Italian researchers had done initial studies on the skeletal remains of the 132 individuals, including estimating their age at death and looking for signs of disease, I was able to travel to Sicily with the Bioarchaeology of the Mediterranean Colonies Project, co-directed by Laurie Reitsema and Britney Kyle, to collect samples for isotope analysis.

My colleagues and I were interested in figuring out whether the soldiers' remains told the same story as the ancient historians. The historical sources say they were likely all Greeks, with some possibly from other cities in Sicily, like Syracuse or Agrigento. Where had these soldiers really come from?

Luckily, chemistry provides a way to answer this question.

Different places on Earth have signature ratios of elemental isotopes in their land and water. Isotopes are versions of elements that have the standard number of protons but various amounts of neutrons.

The trick is that as you consume these characteristic isotopes in your food and drink, your body incorporates them into your bones and teeth. Researchers know that the type of strontium in your body reflects the underlying geology or bedrock where the plants and animals you ate grew. The oxygen isotopes come from your water source. These elements become a physical record of your origins.

While bones are constantly growing – and incorporating elements from your environment throughout life – tooth enamel is like a time capsule. Scientists can use this outer layer of the tooth to figure out where an individual grew up, because it forms when you're a child and doesn't change over time.

The strontium and oxygen isotopes we measured on 62 of the individuals were incorporated into the soldiers' teeth in childhood and preserved there, even after thousands of years in the ground. We used the combination of these elements to determine whether these soldiers were from Himera or not by comparing them to samples we collected to create a local isotopic profile for the city.

Interestingly, when we ran these analyses, we found that the majority of soldiers from the first battle in 480 B.C. were not local. Remember, that was the fight that reportedly had allied support from all over Sicily. These soldiers had such high strontium values and low oxygen values compared to what we'd expect in a Himera native that my colleagues and I think they were from even more distant places than just other parts of Sicily. Based on their teeth's elemental isotope ratios, the soldiers likely had diverse geographic origins ranging through the Mediterranean and probably beyond.

On the other hand, the majority of soldiers from the later battle in 409 B.C. were in fact local. That finding supports the ancient sources that said the Himerans were mostly left unaided in the second fight, which allowed the Carthaginian force to overpower them.

The unknown role of foreign mercenaries

The case of the soldiers from 480 B.C. suggests that Greek armies were more diverse than previously thought. Our results challenge earlier interpretations based on historical documents that the soldiers were Greek and points to the omission of foreign mercenaries in the historians' accounts. 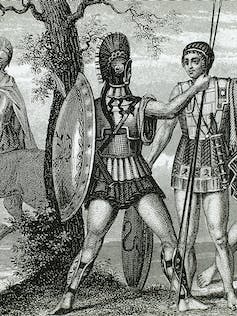 Greek armies at this time were mostly the classic hoplite soldiers: heavily armed foot soldiers. They often fought in groups based on the town they were from, where part of being a citizen meant serving in the military when needed.

The large variation in isotope values between the soldiers from our study strongly implies that there may have been foreign soldiers who joined the Greek side. Hiring foreign mercenaries could have changed the composition of communities in the Classical period, possibly providing outsiders a pathway to citizenship not otherwise available.

While the populations of Greek colonies were likely diverse because of interactions with other groups of people, not all residents of the colony would have been eligible for citizenship. Citizenship meant having a role in political life and was often reserved for wealthier men with Greek heritage. It was rare for foreigners to have a way into this highly esteemed position because, traditionally, one had to be Greek.

Not only does the discovery of foreign mercenary forces change the history of the first battle of Himera, it also transforms our understanding who had power and privilege in Sicily during the Classical period.