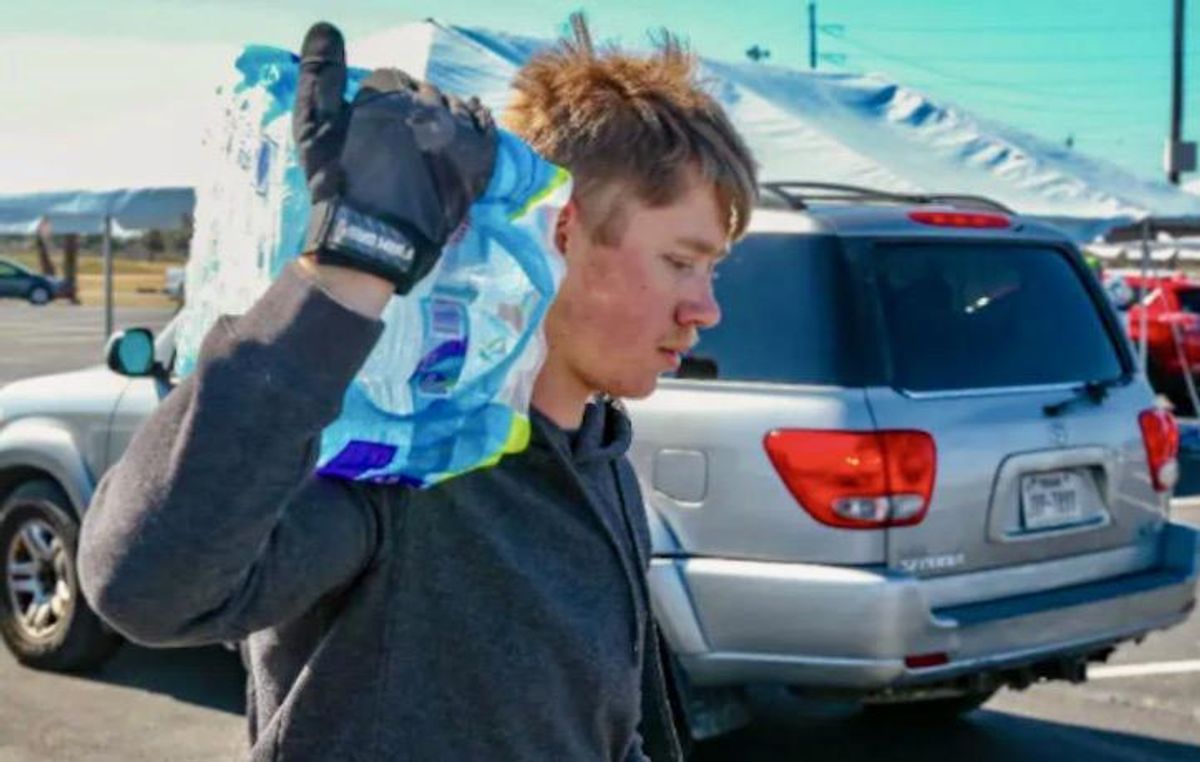 Volunteers hand out cases of water to residents on February 19, 2021 in Galveston, Texas, after a fierce and deadly winter storm(AFP)

Frustrated Texans queued for hours for safe drinking water Friday, after an unprecedented and deadly "polar plunge" burst pipes and left millions in the US state shivering without power or clean water for days.

The extreme winter weather system wreaked havoc across much of the southern and central United States this week, reportedly killing at least 40 people and igniting anger in Texas as authorities scrambled to turn the lights back on.

"I'm very frustrated. I'm a diabetic. I have a 94-year-old senior as a diabetic. We haven't had no medicine. Nothing... So I'm really frustrated mentally. But I'm keeping it together," he said.

Erica Granado, another Houston resident, said she had rushed to the site after seeing it on the news.

"I gotta be early because I knew everybody -- yeah, everybody wants water and so it's a difficult time for everybody," she said, adding: "Thank God I had gas in my car."

On Friday the weather system was slowly moving northeast, where hardy New Englanders -- far more used to scouring winter storms than residents of the Lone Star state -- were battening down.

But even as the temperature rose above freezing in Texas -- and the National Weather Service forecast weekend weather in the 50s Fahrenheit (10-15 Celsius) -- state governor Greg Abbott said some 165,000 people were still without power Friday.

Water pressure problems meant nearly seven million Texans were being advised to boil their water before drinking it or using for cooking, said Toby Baker, who heads the Texas Commission on Environmental Quality, adding that nearly 264,000 people were impacted by non-operational water systems.

Some residents were facing the misery of burst pipes and flooding.

"It was like a waterfall was coming down and it was starting to come out of the bathroom and to the other rooms," said Birgit Kamps of Houston, adding that a neighbor helped switch off the water at the break -- halting the flood, but leaving her without running water.

Texas power companies implemented rolling blackouts in recent days to avoid grids being overloaded as residents cranked up the heat during the cold snap.

The state is the only one in the continental US to have its own independent power grid, meaning it was cut off when the weather hit.

The blackouts also shut down a major computer chip manufacturer, NXP Semiconductors in Austin, at a time when a worsening shortage of semiconductors is already affecting a variety of sectors including automobiles, mobile phones, game consoles and more.

Authorities opened hundreds of "warming centers" across the state. One furniture store in Houston also threw open its doors to freezing residents.

"We had a thousand people coming here trying our warming stations and getting free hot meals," James McIngvale, owner of the Gallery Furniture store, told AFP.

President Joe Biden spoke with Bob Fenton, acting director of the Federal Emergency Management Agency (FEMA), which is already on the ground in Texas, and said he was ready to mobilize other federal agencies, according to a White House statement Friday.

Biden also planned to sign a major disaster declaration in the state, the White House said. On Thursday he told Abbott the government would work "hand-in-hand" with state authorities to offer relief.

The president has also ordered federal authorities to coordinate disaster relief in Oklahoma and Louisiana, which declared emergencies after they were also hit by the extreme weather.

The cold stretched as far as Seattle, in the northwestern US state of Washington, where a 90-year-old woman trudged six miles (10 kilometers) in a foot of snow with two walking sticks to get her first vaccination against Covid-19, after frantically calling around to get a shot.

The harsh weather had made driving to Fran Goldman's hospital appointment too dangerous.