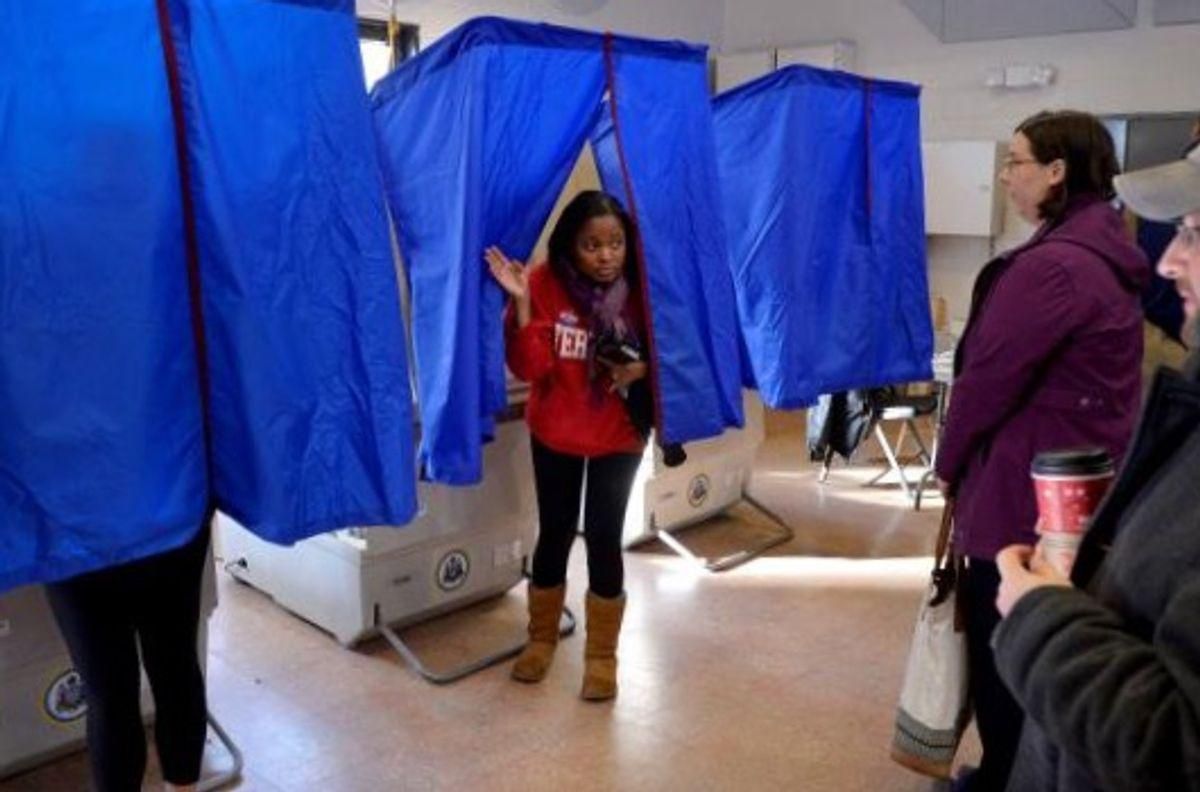 As Republican lawmakers in nearly every U.S. state introduce hundreds of voting restriction bills, Texas took center stage Thursday after its Senate approved a measure opponents say disproportionately targets minority and urban voters by limiting when, where, and how people can vote.

"It makes absolutely no sense to criminalize people for wanting to participate in democracy, which should be our goal. It is almost like Texans get punished for coming out and voting in large numbers."
—Ofelia Alonso,
Texas Rising

One provision in the bill would require an equal number of voting machines at countywide polling stations, which Myrna Pérez, elections director at the Brennan Center for Justice, calls "a backdoor way of eliminating large voting centers that could be used by large numbers of city residents."

Another provision would force voters utilizing the disability exemption for mail-in voting to show documents proving their condition. And in a move Pérez says "openly invites the harassment of voters," the bill would allow partisan poll-watchers to record video of people casting their ballots.

Although Republicans control both houses of the Texas legislature, the governor's office, and all nine seats on the state Supreme Court, Democrats have made significant political inroads in a state that hasn't voted for a Democratic president since Jimmy Carter in 1976 and hasn't elected a Democrat to the U.S. Senate since 1988.

A post-election analysis by The Texas Tribune last year found that Democrats turned out record numbers of voters in cities and suburbs, and voting rights advocates are warning that these are precisely the people that S.B. 7 seeks to disenfranchise by making it more difficult for them to cast their ballots.

For example, more than 127,000 Houston-area residents voted via drive-thru early voting last year. More than half of these voters were Black, Latinx, or Asian, according to the Associated Press.

"Hearing all of that, who are you really targeting when you're trying to get rid of drive-thru voting?" Democratic state Sen. Carol Alvarado said in an AP interview.

State Sen. Borris Miles, a Houston Democrat, told the Tribune that "as I see this bill, it's a pure case of suppression."

"There are some things in here that are really offensive," he said. "This hurts to the core."

Ofelia Alonso, who volunteers with the civil rights advocacy group Texas Rising, drove hundreds of miles from her home in Cameron County along the Mexican border to the state Capitol in Austin to testify against S.B. 7 last week.

"Honestly, because we all work doing voter registration, we know how nonsensical this bill is," Alonso said, according to the AP. "It makes absolutely no sense to criminalize people for wanting to participate in democracy, which should be our goal. It is almost like Texans get punished for coming out and voting in large numbers."

Brett Edkins, political director at the nonprofit grassroots advocacy group Stand Up America, blasted S.B. 7 as "a shameful attack on the right to vote" and "a disgusting display of partisanship from Texas Republicans."

"It's clear that the Republican Party believes the only way they can win future elections is to keep millions of Americans from casting their ballots," Edkins said in a statement Thursday.

The Texas bill is but the latest in a wave of GOP attempts to restrict voting access across the nation. According to the Brennan Center—a law and public policy institute at the New York University School of Law—as of March 24 GOP lawmakers have introduced 361 bills with restrictive provisions in 47 states, a 43% increase from even just a month earlier.

Furthermore, the states which have introduced the most voter restriction bills—Texas (49), Georgia (25), and Arizona (23)—are all states in which Democrats have either won major victories or made significant inroads in recent elections.

In Georgia—where voters handed Democrats control of the U.S. Senate and played a decisive role in President Joe Biden's 2020 election victory—Republican Gov. Brian Kemp last week signed into law a sweeping voter restriction bill that, among other things, criminalizes the distribution of water to people waiting to vote.

"Let's not forget: These efforts to restrict votes do not arise from a problem based in facts or reality," the Brennan Center's Pérez wrote in an analysis Tuesday. "Rather, they rest on the Big Lie, the disproven notion that there was mass voter fraud in 2020."

"Prominent Texas leaders actively amplified lies of voter fraud in the aftermath of the last election," Pérez continued. "In fact, they are still spreading lies about voting in order to bolster their case for suppressive bills."

"In a recent Texas House Elections Committee hearing, the Texas attorney general's office claimed that yearly cases of voter fraud were rising swiftly," she added. "This claim turned out to be not only highly misleading, but further investigation revealed that prosecutions are reportedly disparately targeting minorities."

The day after Pérez wrote those words, the Texas Court of Criminal Appeals granted a review of the case of Crystal Mason, a Black Fort Worth woman sentenced to five years in prison for inadvertently filling out an invalid provisional ballot that was never counted in the 2016 presidential election.

Earlier this month, Sen. Raphael Warnock (D-Ga.)—one of the two Democrats whose 2021 victory flipped the U.S. Senate—slammed what he called the GOP's "massive and unabashed assault on voting rights" as "Jim Crow in new clothes."

Like many Democrats, Warnock touted the For the People Act—a sweeping voting rights and anti-corruption bill passed by the House on March 3—as a "major step in the march towards our democratic ideals by making it easier, not harder, for eligible Americans to vote by instituting common sense, pro-democracy reforms."

Brennan Center president Michael Waldman agrees. "The For the People Act... would stop the new wave of voter suppression, cold," he testified before the U.S. Senate Committee on Rules and Administration last week. "It stops it in its tracks, and Congress has the power, the right, the authority—constitutionally and legally—to do this."

"Will we live up to our best ideals?" Waldman asked during his testimony. "Will we build a multiracial democracy that really represents all people, or will we allow a drive to take place to turn the clock back to cut back on voting rights? This legislation would be a significant and long overdue milestone for our country."