The backlash to Christianity: Republicans are now panicked — but they only have themselves to blame 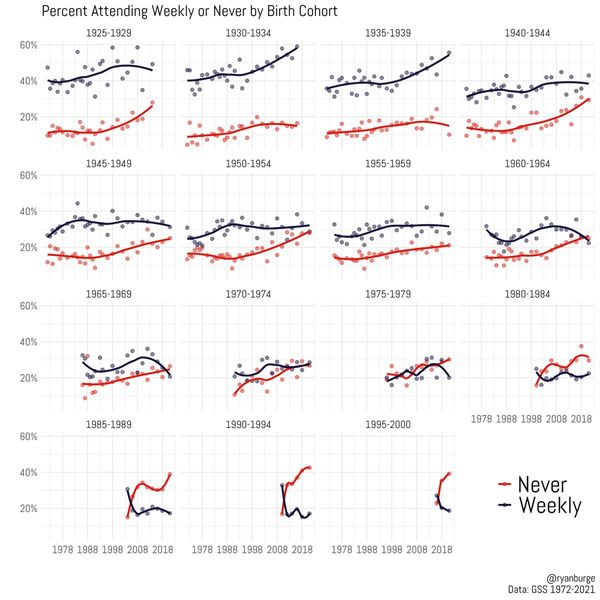 In response to Americans losing interest in faith, Republicans are in a full-blown panic, lashing out and accusing everyone else — liberals, schools, immigrants, pop culture, you name it — for this shift in religious sentiment. Worse, more are advocating the use of force to counter this decline. If people don't want religion, well, too bad. More Republicans are arguing that Christianity should not be optional — First Amendment be damned.

Republicans are justifying this turn towards compelled religious performance by whining about the empty pews in their church.

As Jack Jenkins of Religion News Service reported, increasing numbers of Republicans are ignoring the plain text of the First Amendment — which says the government shall "make no law respecting an establishment of religion" — in favor of the tortured myth that there's no separation of church and state. Former Ohio treasurer and failed Senate candidate Josh Mandel, Rep. Lauren Boebert of Colorado and, most troublingly, Justice Neil Gorsuch have all dismissed the idea that such a separation is mandated by the Constitution.

Christian nationalism, the idea both that the U.S. should be an explicitly Christian nation and that the laws should enforce fundamentalist Christian beliefs, used to be an unthinkable idea in American politics. Now it's normal among the Trumpist branch of the GOP. As Heather "Digby" Parton writes, the GOP candidate in Pennsylvania's gubernatorial race, Doug Mastriano, barely hides his Christian nationalist views. Instead, he pals around with Gab CEO Andrew Torba, who openly says things like, "We don't want people who are atheists. We don't want people who are Jewish," because this is supposedly "an explicitly Christian country."

And, of course, Rep. Marjorie Taylor Greene of Georgia has made this crystal clear, recently declaring: "We should be Christian nationalists."

This term, the Supreme Court ruled in favor of a high school football coach who wants to lead Christian prayers from the 50-yard line during games, which is a direct reversal of decades of jurisprudence against coerced religious displays in public schools. Gorsuch defended the ruling by claiming that the prayer was merely a private act, despite being held in public and done in a way to make players feel they would be penalized for not joining. But right-wing groups understand fully that the ruling was meant as an open invitation to forced Christian prayer in schools. As the Washington Post reported this week, "activists are preparing to push religious worship into public schools nationwide." Your kid may be Jewish, Muslim, Buddhist, atheist or otherwise non-Christian, but too bad. They better recite the Lord's Prayer in class or risk being punished or ostracized.

As blogger Roy Edroso documents, Republicans are justifying this turn towards compelled religious performance by whining about the empty pews in their church. He points to an op-ed by David Marcus at Fox News in which Marcus complains about declining faith and argues that the recent Supreme Court ruling will turn things around. "[I]t will be a new day for prayer in public schools. And God will operate a bit more openly," Marcus gushes.

Mandated faith is morally reprehensible and in direct violation of human rights. But it's also wrong to pin this decline in religious fervor to laws and customs protecting religious minorities from such coercion. On the contrary, if Republicans want to know who is to blame for young people abandoning the church in droves, they should look in the mirror.

As Robert Jones of the Public Religion Research Institute told Salon in 2017, there's "a culture clash between particularly conservative white churches and denominations and younger Americans" over issues like science, education, and gender equality. Younger people brought up in these churches increasingly reject the sexism, homophobia, and anti-science views of their elders. Since the churches won't reform to be more egalitarian and pro-science, they find that these younger people are walking away altogether.

These trends will likely only accelerate in the wake of the Roe overturn, especially as Republicans grow more fanatical in their efforts to punish Americans for having sex. All but eight Republicans in the House voted against the legal right to use contraception. Fewer than a quarter of them voted to support same-sex marriage rights. Both of these rights are wildly popular. Eighty-four percent of Americans believe in the right to use contraception (and over 99% of those who have had heterosexual sex have used it). Over 70% of Americans believe in the right to same-sex marriage.

The more both Republicans and the Christian establishment reject these basic rights, the more they can expect to be rejected themselves, especially by younger people.

"[T]hese days it seems the people most likely to identify themselves as Christians tend to be Republicans as well the most vicious, hateful, un-Christian sons of bitches you'd ever want to meet," Edroso writes. Sure, some people respond by seeking liberal churches. But it's simpler and easier to just give up on being a Christian altogether, to drop all that baggage.

As an atheist myself, I really don't care if large numbers of people give up religion. On the contrary, it seems like a sensible choice to me. But if Republicans don't like people losing faith, well, they need to admit they did this to themselves. If they'd moderated their views and made their churches more tolerant and welcoming places, more people would be interested in attending. And all this talk of forced prayer and Christian nationalism isn't going to help matters, but will instead make ordinary people hate them even more. As with the GOP-led book bans only leading more kids to read the forbidden books, Republican attempts to foist their beliefs on others only causes more backlash against Christianity itself.