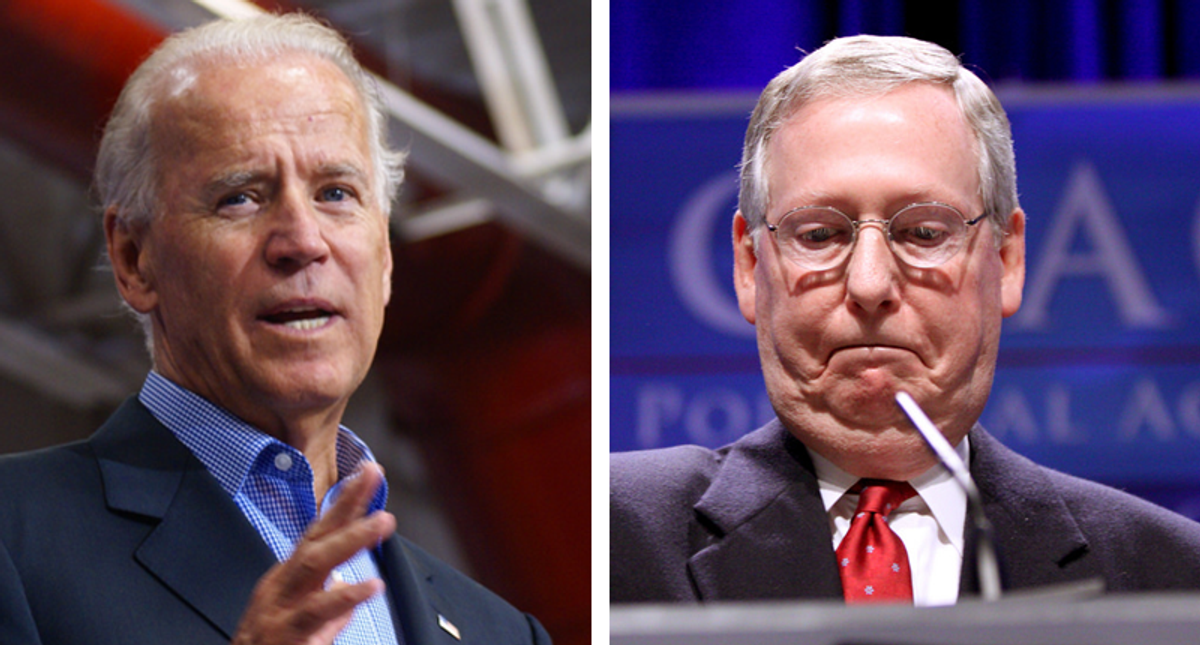 The hallmark of fascist collectivism in international history is totalizing loyalty to The Leader, which, in a foreign but familiar turn-of-phrase, would be translated to Der Führer. That fuhrer, when it comes to the Republican Party, is Donald Trump. The former president insists he defeated Joe Biden. He insists everyone in the GOP believe and repeat the same lie. Anyone who does not believe and repeat the same lie is quickly identified as insufficiently loyal. This is how fascist collectivism works. The sky isn't green because the fuhrer says it is. It's green after everyone agrees. If that sounds like mass delusion is the heart of fascism collectivism, that's because it is.

Mass delusion is hard to believe yet here we are. Wyoming Congresswoman Liz Cheney, daughter of former Vice President Dick Cheney, yields to no one when it comes to conservative bona fides. Her voting record is far more conservative than that of her challenger, New York Congresswoman Elise Stefanik. But unlike Cheney, Stefanik believes and repeats the lie that the fuhrer won the election, the lie he insists everyone in the GOP believe and repeat. The House conference, with Donald Trump's blessing, is set to purge Cheney from its leadership, replacing her with Stefanik. Again, that's fascist collectivism. Individuals do not matter even when they are, in every meaningful way, in agreement with the fuhrer. What matters is totalization. In short order there's a dime's worth of difference between the party and the leader.

Mass delusion is hard to believe. As a consequence, it's hard to take seriously. From the liberal perspective, Senate Minority Leader Mitch McConnell seemed downright irrational when he said Wednesday that, "One hundred percent of my focus is on stopping this new administration." Why would he give away his bargaining power? Why would he say out loud the Republicans don't care about solving the problems all Americans face in the middle of a once-in-a-century plague? If there's a way to blow the Republicans' chances of taking back control of Congress in 2022, that's it. This, as Thom Hartmann said, is how "Mitch McConnell is about to destroy the GOP."

Actually, McConnell spoke rationally. The Democrats have razor-thin majorities. History favors the out-party. (It's the GOP's turn.) Structures, like gerrymandered congressional districts, favor them. (So do reapportioned seats resulting from the latest census.) States controlled by the Republicans are squeezing their electorates down to prejudicial sizes. The fuhrer's lie, amplified by the right-wing media apparatus, which is global in scale, proliferates like variants of the coronavirus. All this is quite clear to McConnell. Sure, mass delusion is the heart of fascist collectivism. But do not confuse that for electoral disadvantage. Why should mass delusion matter when there's a dime's worth of difference between the base of the Republican Party and the leader?

As I said, most people—politically active though they may be—won't see what's happening even as what's happening is happening right in front of them. The current president is no exception. The difference is Joe Biden is upfront about it. During a White House presser Wednesday, he said the Republicans seem to be undergoing a "significant sort of mini revolution" detrimental to the country's need for two healthy political parties. He added: "I think Republicans are further away from trying to figure out who they are and what they stand for than I thought they would be at this point."

This is something of a relief to those of us who had worried the president really believed the Republicans would have an "epiphany" in the wake of the 2020 presidential election. In reality, it's the opposite. Instead of becoming diluted and easier to bargain with, the party's radicalism has become darker, denser, purer and (literally) deadlier. That Biden thinks they are further away from figuring things out for themselves than he thought suggests he might conclude they'll never get there, and therefore not wait around for the spirit of bipartisanship to materialize out of thin air.

Elderly as he is, however, the president is still a quick learner. And he's shrewd, too. To say the Republicans can be bargained with in the face of all evidence to the contrary is, nevertheless, the right thing to say for someone who wants to command the center. It isn't, however, the right thing to believe. McConnell has one card to play. Just one. Everything else is bluffing. The time is coming when Biden will have to call his bluff.

FROM YOUR SITE ARTICLES