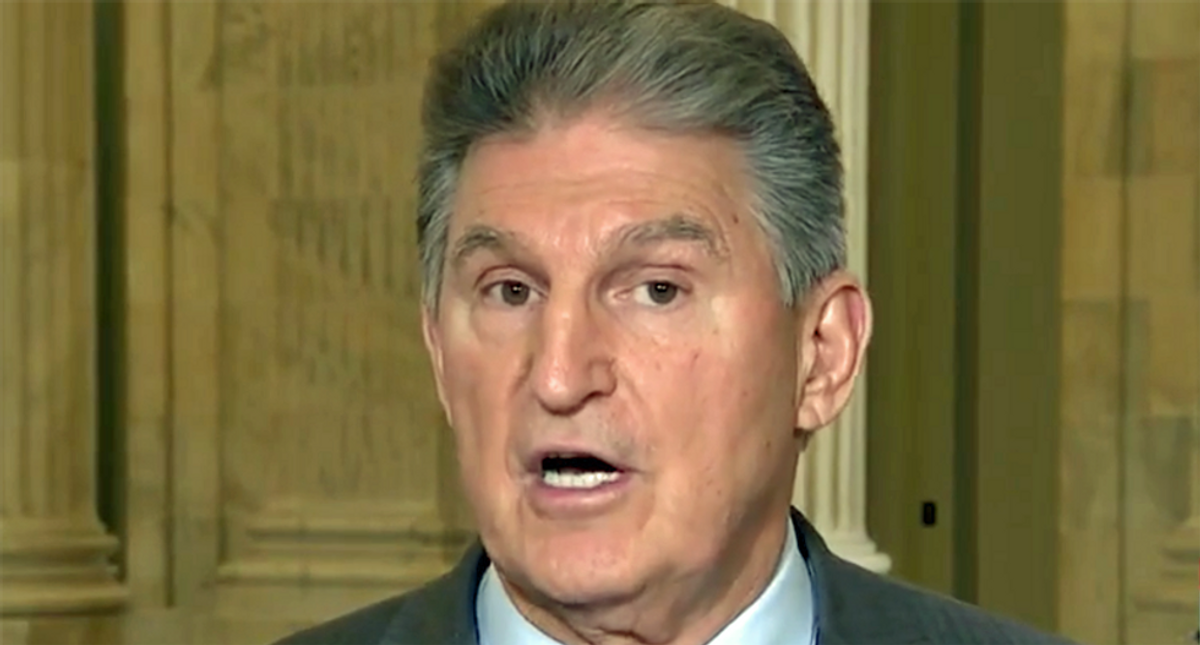 In an op-ed published by the Charleston Gazette-Mail over the weekend, Sen. Joe Manchin of West Virginia voiced his opposition to the For the People Act — a comprehensive voting rights bill that was passed by the U.S. House of Representatives earlier this year but now faces a steep uphill climb in the U.S. Senate. The op-ed gave liberal and progressive Democrats yet another reason to feel frustrated with the centrist Democrat, who Washington Post opinion writer James Downie believes has become a "patsy" for Senate Minority Leader Mitch McConnell.

Manchin, in his Gazzette-Mail op-ed, argued that the bill encourages "partisan divisions" to "deepen." And Manchin reiterated that theme during an interview with Fox News' Chris Wallace.

In his column, Downie stresses that he doesn't doubt Manchin's sincerity. But Downie also believes that the West Virginia Democrat is playing into McConnell's hands.

"What makes Manchin's stances so aggravating?" Downie writes. "It's not that his views are insincere…. Perhaps the issue is the laziness of Manchin's centrism. Rather than a mix of substantive policy stances, some left and some right, Manchin simply takes the middle of the two parties' stances."

Downie continues, "For example, President Biden wants a 28% corporate tax rate, while Republicans want 21%. So, Manchin backs 25%. Democrats want a $15-an-hour minimum wage, while Republicans want $10? Manchin supports $11. One gets the sense that if Manchin were told one side believes two plus two equals four and the other side believes it equals eight, he'd conclude that it equals six — and that saying otherwise divides the country."

Manchin does support the John Lewis Voting Rights Advancement Act, which he views as a compromise. But Downie argues that Republicans in the Senate, including McConnell, have no interest in compromise or in meeting Democrats half way — and it's "epitome of naivete" for Manchin to think that they are.

Downie writes, "Worse still was his claim on CBS that 'my Republican friends and colleagues see the deadlock also — this is not something they desire or wish.' That's past naivete or foolishness — it's straight-up delusion. Manchin has become the Senate's Walter Mitty: a man who believes himself the champion of a fantasy and who has hope but no plan…. Anything that would snap him back to our partisan reality he either ignores or treats as divisive."

The columnist adds, "Meanwhile, McConnell and the rest of the Republican Party laugh all the way to the ballot box. That's what makes Manchin so infuriating. In his mind, he's the hero of this story. In truth, he's the patsy. And the country pays the price for his delusions."