The other epidemic: Gun violence in the US is coming to a head 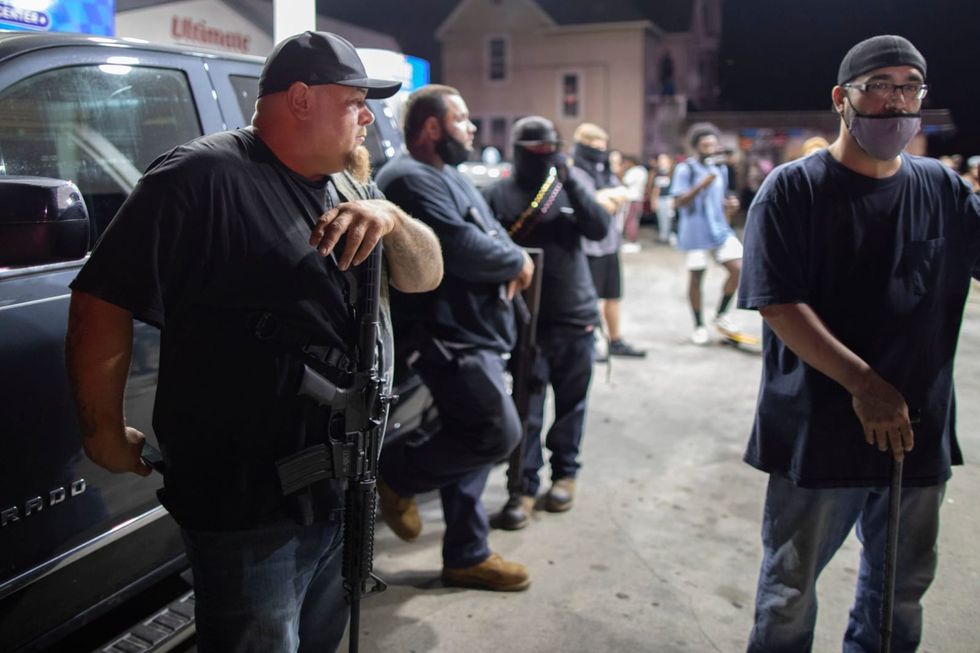 Men stand at a gas station as they try to protect the business from the riots that have broken out all over the city of Kenosha, Wisconsin. Businesses were destroyed, and people were shot and killed in August 2020 following the shooting of Jacob Blake, an African-American man, by a white police office. Chris Juhn/via ZUMA Wire/dpa

Loud shots rang out across a street in a part of Washington popular for its nightlife on a recent warm night.

Videos showed people dining at restaurant patios jumping up and fleeing for cover. A CNN reporter who happened to be at the scene filmed the events as they unfolded on his smartphone. Two people were injured, police said later, while the shooters drove off.

Hours later, helicopters were still circling above the neighbourhood, while police sirens whined repeatedly nearby.

The events are not unusual in the United States, where dozens of people die of gun violence every day, on average.

A 6-year-old girl was shot from a passing car in Washington just days earlier. However, attention focused on the shots fired in the popular part of Washington, and questions were asked in the White House press briefing. "This is a pretty popular part of the city many of us live in," White House spokesperson Jen Psaki said when asked about it.

Shootings usually do not occur in places where lawmakers or journalists live, although they are everyday occurrences in poorer areas with high crime rates. However, the latest cases have highlighted the fact that 2020 was the deadliest year for gun violence in the past 20 years in the US. Some 19,000 people died, not counting suicides, according to the Gun Violence Archive.

The numbers are even worse for 2021, with an average of 56 people dying per day, the organization says - also excluding suicides.

That is an additional 12,000 deaths - with no clear explanation why.

Some say the pandemic is exacerbating the country's problems, with job losses, school closures and widespread despair.

At the same time, the pandemic meant many sources of support, whether projects or social institutions, also fell by the wayside.

Well over half of the incidents of gun violence occur in the poorest districts of the country, where median household income is below 40,000 dollars per year, according to an analysis by broadcaster ABC.

The firearms industry is using the pandemic to increase sales, according to Josh Sugarmann, director of the Violence Policy Center that studies gun violence and advocates for stricter gun laws.

The traditional market for guns, largely bought by white men, is saturated, but the industry is taking advantage of people's sense of insecurity to sell more guns.

Another theory suggests that rising gun violence is associated with protests against police violence after George Floyd, a black man, was murdered in May 2020 at the hands of a white police officer.

The demonstrations that broke out in protest at his death may have discouraged the police and further damaged the fractured relationship between the community and security forces, according to this theory.

"Cops are having real trouble," President Joe Biden said recently. "They're not all bad guys, a lot of good guys. We need more policemen, not fewer policemen, but we need them involved in community policing."

The Washington Post has criticized the theory that violence was caused by the protests as too simplistic. However, it is hard to deny that less-inspired policing - partly due to public health concerns or reduced morale after the summer protests - may have had a role.

Sugarmann wants to see the general focus shift away from people with guns and towards the type of guns that are being sold.

"The gun industry is not static," he warns. "What they are selling is not safety, is not sporting use, but lethal militarization."

Biden's administration has already taken many good first steps, he says. "Certainly more can be done."

In the past, Biden has described gun violence as an "epidemic."

He has blamed the rise in gun violence on dealers failing to follow the law. Ghost guns are a further problem: Homemade firearms that people assemble themselves, without commercial serial numbers.

If Biden has his way, weapons of war like assault rifles would no longer be for sale.