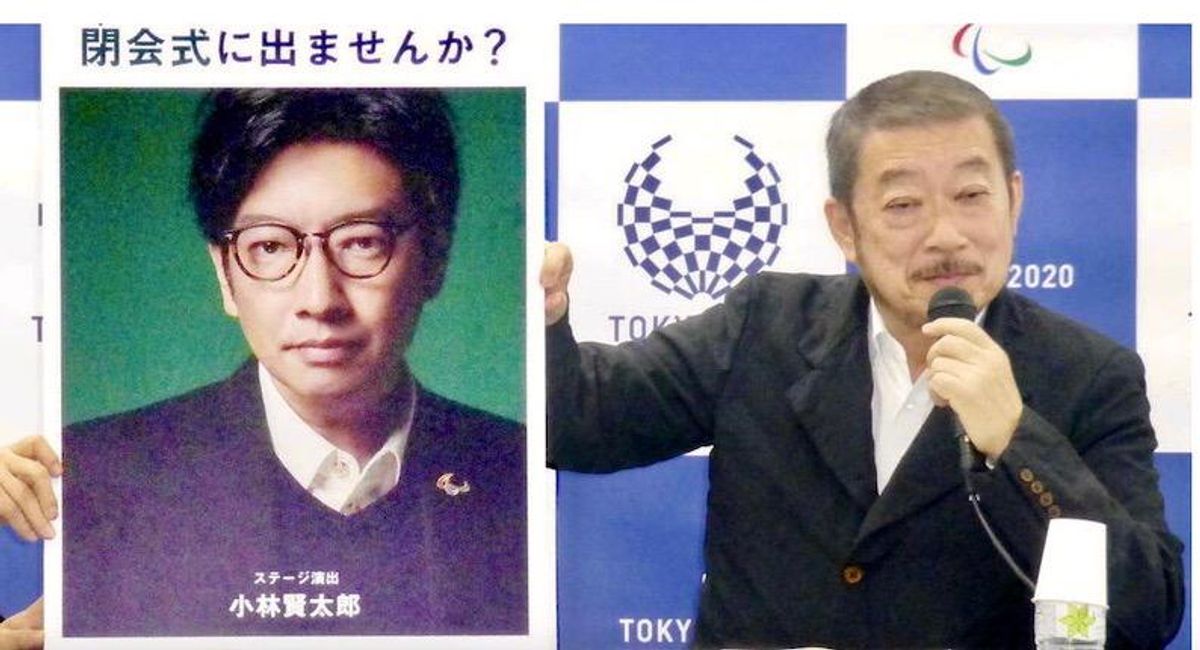 In this 2019 photo, Hiroshi Sasaki, then executive creative director Tokyo 2020 Paralympic Games, displays a portrait of Olympics opening ceremony show director Kentaro Kobayashi. Both men have since stepped down from their roles amid scandals. © Kyodo via Reuters

On the eve of the Tokyo Games, organisers fired the director of the opening ceremony over comments he made about the Holocaust, while media reported former Prime Minister Shin

The news is the latest in a series of embarrassments for Tokyo organisers that have sparked outrage at home and abroad, and comes just days after a well known musician was forced to step down as composer for the ceremony after old reports of his bullying and abusive behaviour surfaced.

Abe, who famously dressed up as the titular plumber from video game Super Mario at the Rio Games to represent Japan, played an outsized role in attracting the Olympics to Tokyo.

In a speech in front a banquet room full of International Olympic Committee members in 2013 that the lingering nuclear disaster at Fukushima was "under control" and pitched his nation as a "passionate, proud, and a strong believer" in the Olympics.

At the time, Abe and his supporters hoped the Olympics would parallel the 1964 Tokyo Games heralding the nation's revival after decades of economic stagnation and also mark its recovery from a devastating nuclear and natural disaster in 2011.

Instead, the Games, delayed a year because of the global pandemic, has faced a series of setbacks, including the exit of Yoshiro Mori, the former head of the Tokyo 2020 organising committee, who resigned after making sexist remarks. That was soon followed by the resignation of Tokyo Olympics creative head Hiroshi Sasaki after he made derogatory comments about a popular Japanese female entertainer.

The Tokyo 2020 organising committee said Kentaro Kobayashi, who is listed as a show director for the Games' opening event, was fired after a joke he made about the Holocaust as part of his comedy act in 1998 resurfaced in domestic media.

"Any association of this person to the Tokyo Olympics would insult the memory of six million Jews and make a cruel mockery of the Paralympics," said Abraham Cooper, a rabbi and associate dean and global social action director of the centre.

The opening ceremony on Friday, which normally stands as a major showcase of the host nation, is set to be a subdued affair, with Japanese media reporting that less than 950 people – including only around 15 global leaders – are set to attend.

First Lady Jill Biden is expected to land in Tokyo on Thursday afternoon for the Games' opening ceremony, raising expectations she might also use her attendance to discuss vaccines with Prime Minister Yoshihide Suga.

Biden has been travelling across the United States urging more people in the country to get inoculated.

Only a third of Japanese have had at least one dose of the vaccine, fuelling public concerns that the Olympics could become a super-spreader event. Already dozens of attendees have tested positive for COVID-19, forcing athlete withdrawals and teammates into isolation.

NHK said Abe decided against attending the ceremony after the Japanese government declared a state of emergency and virus restrictions over Tokyo, in an effort to minimise health risks among residents and visitors. Abe's office could not immediately be reached on Thursday, a public holiday in Japan.

COVID-19 infections have jumped in the capital and are projected to spike further, straining healthcare providers.

In a recent poll in the Asahi newspaper, 68% of respondents expressed doubt about the ability of Olympic organisers to control coronavirus infections, with 55% saying they opposed the Games going ahead.

Olympics competition has already begun, with the Japanese women's softball team getting the hosts off to a winning start on Wednesday, while the highly ranked U.S. women's soccer team were upset by Sweden.

The second day of softball began early Thursday under cloudy skies in Fukushima with the United States defeating Canada by a run to go 2-0 in the standings. Japan faces Mexico later.