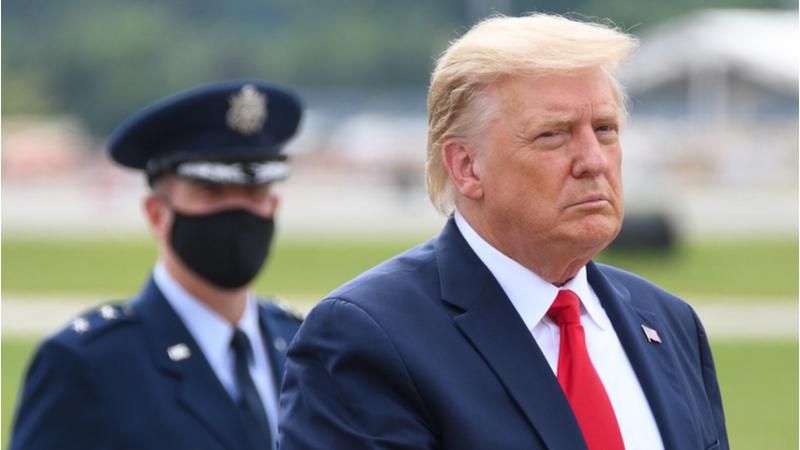 Former President Donald Trump may be huddling with Republican leaders, considering founding his own political party, and pledging to carry on his agenda, but at least one prominent former official thinks Trump is done for in politics.

Former Secretary of Defense Chuck Hagel, a frequent vehement Trump critic, told Raw Story in an exclusive interview that he thinks that politically, Trump is a "dead man" — regardless of the outcome of the Senate impeachment trial slated to start next month.

That's because Trump's biggest problem, bigger even than being the first president ever to be impeached twice, is that he may still face legal consequences at the state level for what Hagel described as his various shady business entanglements.

"I'm not worried about Mr. Trump coming back on the scene politically. He's a dead man," Hagel said, speaking days before the inauguration of President Joe Biden. "He can say what he wants: 'I'm going to run again in 2024.' I doubt that's going to happen, because he's got some immense personal problems that he's going to face."

Trump met Thursday with House Minority Leader Kevin McCarthy at his Mar-a-Lago resort in Florida, where the two men discussed working together to win Republican Congressional seats in 2022, according to statements from both camps shared with the press. Trump has also reportedly recently discussed with associates starting a new political party called the "Patriot Party." And a recent statement opening the Office of the Former President pledged Trump would "carry on the agenda of the Trump Administration through advocacy, organizing, and public activism."

But Hagel also said Trump will be busy presiding over the demise of his hotel empire, implying that polite society will shun him while the hooligans who attacked the U.S. Capitol in Trump's name ahead of the counting of the electoral votes will not be able to help.

"That crowd is not going to float him with millions and millions of dollars worth of loans to keep him in business. They're not going to occupy $500-a-night rooms at his fancy hotels. No, that's a different crowd," Hagel said. "He's got immense problems here, and there is no way that his properties, his hotels, are going to be enhanced by his service in the White House. They're going to be considerably diminished."

Despite his prediction that Trump's personal affairs are on the brink of unravelling, Hagel said it's important that the Senate pursue the impeachment trial while Trump is out of office.

Hagel served as a Republican senator representing Nebraska from 1997 until 2009, when he joined the Obama administration in intelligence roles and eventually as defense secretary. But Hagel has been in government much longer than that. He recalled casting his first ever vote on top of a tank in Vietnam during the war there — for President Richard Nixon — and later coming to Washington, D.C., to work as a staffer to Rep. John Y. McCollister (R-Neb.) during the Watergate years.

"I mean, even Nixon didn't come close to what Trump has been saying and doing," Hagel said. "He has shown that he was the most irresponsible leader in the history of this country, for not just what he did the last few weeks, but what he continued to do for four years, and he's decimated our governing institutions here in Washington."

But despite thinking Trump is worthy of impeachment for his general misgovernance of the country, Hagel said the targeted article of impeachment against Trump, singling out his actions leading up to the insurrection at the Capitol, is the right move. To those who are calling for Congress to move on, Hagel said the former president must be held accountable.

"You have a president that has been inciting this," Hagel said. "I know all the arguments, 'Oh, why don't we just unify the country and let go?' No, you can't do that. No, because that's a very bad and dangerous precedent you set for the country. No, he's got to be held accountable, like any of us, and that accountability is right. I think impeachment was right."

If he was still a senator, Hagel said, he would vote not just to find Trump guilty during the impeachment trial, but also to bar him from ever serving as president again. If the former president was convicted by the Senate — which Hagel said is unlikely, but not impossible — the chamber would probably hold a separate vote on whether to disqualify Trump from office moving forward.

"President Trump should be disqualified because of what he's done to this country," Hagel said. "This is all a result of, the culmination of, the actions and words of an irresponsible, erratic President of the United States. I mean, that's the thing that's just so astounding. We've never had that before at this scale."

Unlike recent comments from his former colleague James Comey, who was director of the Federal Bureau of Investigation while Hagel was secretary of defense, Hagel said Biden doesn't need to look at a potential pardon for Trump anytime soon.

"That would be my advice to Biden: You don't need to make that decision now," he said. "I think a lot of things have to play out yet before, at least in my opinion, there would be any talk of pardoning him."

Hagel also bemoaned the state of the Republican Party he was a part of for decades. He said that under Trump, the party became an organization dedicated only to advancing Trump's goals. But the party had problems long before that, moving away from what he called the core ideas of Republicanism: Fiscal restraint, international engagement, free and fair trade, competent governance and a strong national defense. Now, he said, the GOP needs to move away from Trump and find a new leader while also figuring out what it even stands for anymore.