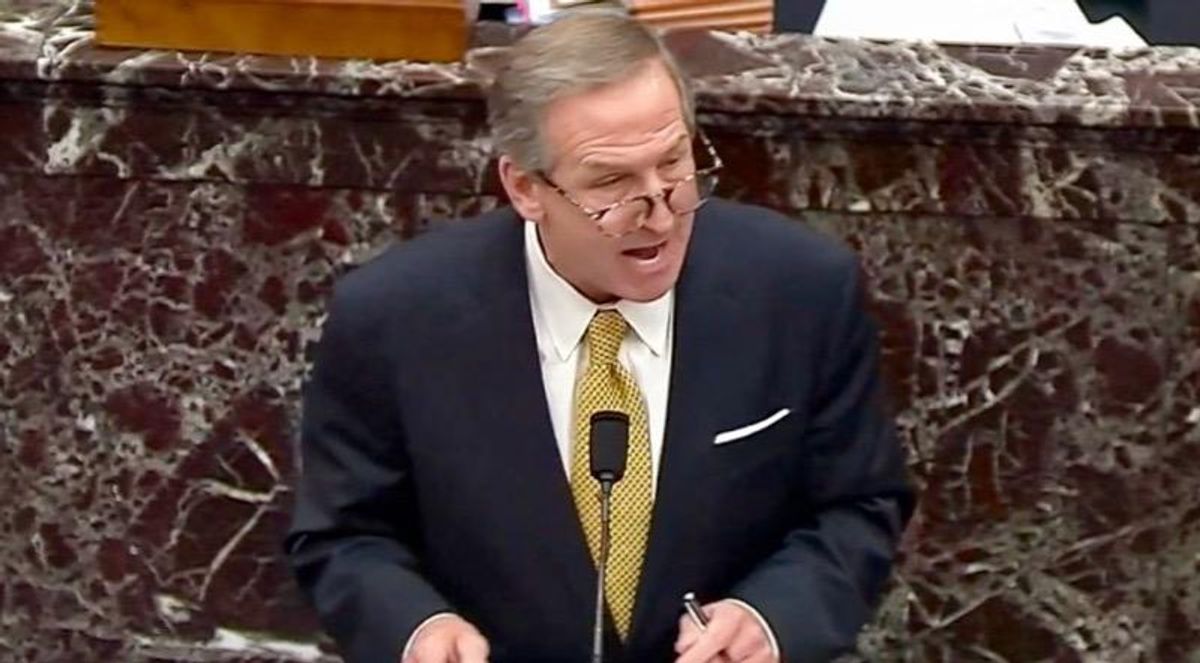 Michael van der Veen, one of former President Donald Trump's defense attorneys, decried the impeachment of his client as "constitutional cancel culture," during his opening remarks – remarks that were widely refuted, debunked, and pronounced disgraceful in real time.

Van der Veen, who once sued Trump on behalf of a client and described him as a “f—ing crook," a claim he denies, engaged in what CNN's Keith Boykin described as "whataboutism" and "nothing but a Trump campaign commercial."

But it was his claim of "constitutional cancel culture" that infuriated many and led to mocking. Take a look:

So the "constitutional cancel culture" guy who literally tried to claim ANTIFA was responsible for the MAGA insurrection riot, lands his presentation on the need to "unify." I think my brain has cracked down the middle....
— Joy WE VOTED!! WEAR A MASK!! Reid 😷) (@JoyAnnReid) February 12, 2021

"Constitutional cancel culture" --
it's like the Fox chyrons are writing themselves... — Susan Glasser (@sbg1) February 12, 2021

I remember like two months ago when these people were trying to throw out my vote. But go on about constitutional cancel culture
— BaA (@USSBrittanica) February 12, 2021

I'm okay with Constitutional cancel culture.
We should be canceling anyone that tries to overthrow the government. — Lord Anthony Walker (🔥 Hot Medic 🔥) 🇺🇸 (@anthonycwalker) February 12, 2021

"Witch hunt" "Constitutional cancel culture" "Unity" "Antifa"
This is just a glimpse into the patently false legal arguments that we are being subjected to right now. — Democracy Docket (@DemocracyDocket) February 12, 2021

Trump's lawyer is trying to make “Constitutional Cancel Culture" into a thing.
It's not a thing. pic.twitter.com/rI2WxGLv6l — Katie S. Phang (@KatiePhang) February 12, 2021

if "constitutional cancel culture" means impeaching traitors, i think the founders would be okay with that pic.twitter.com/LIDQOIQu0V
— Lauren Windsor (@lawindsor) February 12, 2021

“Constitutional Cancel Culture" is what Trump's lawyer just called his 2nd impeachment and y'all really need to stop with the “cancel culture" nonsense because you sound dumb as hell
— Brad Batt for TN State Sanity ✊🏼✊🏽✊🏾 (@bradbatt) February 12, 2021

Former White House physician Dr. Ronny Jackson drank and took Ambien on the job, and was accused of making sexually suggestive remarks to women on his team, according to a report. A scathing 37-page report from the Department of Defense Inspector General revealed that multiple people described Jackson, who now serves in Congress, as a boss from hell who made life miserable for subordinates. “Many of these witnesses described Jackson’s behavior with words and phrases such as ‘meltdowns,’ ‘yells’ for no reason,’ ‘rages,’ ‘tantrums,’ ‘lashes out,’ and ‘aggressive,’” the report said. “These witnes...

Gov. Andrew Cuomo (D-NY) on Wednesday rejected calls for his resignation after three woman accused him of unwanted advances.

During his first press conference in weeks, Cuomo addressed the allegations against him and promised to learn from the experience.