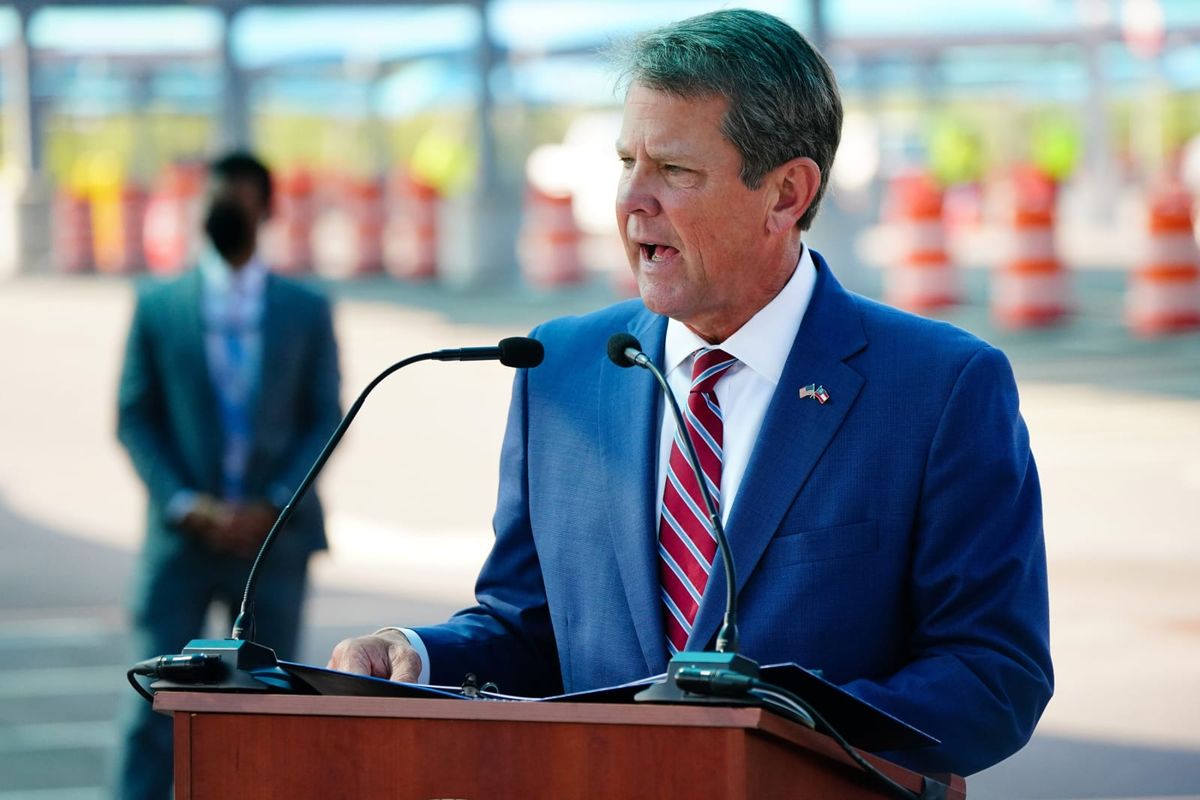 Republicans in at least 14 states have introduced legislation that would seize power from election officials or limit their authority, apparently in response to unfounded attacks from former President Donald Trump and allies who sought to overturn his election loss.

Republican state legislators across the country have responded to Trump's baseless election challenges, which were roundly rejected by dozens of judges, by rolling out more than 360 bills aimed at restricting voting access in nearly every state. But while much of the attention has focused on measures that would limit ballot access, like Georgia's sweeping election bill, which Democrats have compared to Jim Crow-era restrictions, some of the proposals include provisions that would strip election officials of power and even impose criminal penalties for officials who defy the new restrictions.

Coverage of Georgia's massive bill has largely focused on provisions that would restrict absentee ballot access and make it a crime to provide water or food to voters in long lines. But the bill also includes more insidious measures that could allow Republicans to give "themselves power to overturn election results," Sylvia Albert, director of the voting and elections program at the nonpartisan voter advocacy group Common Cause, said in an interview with Salon.

For instance, the new law would allow the Republican-led state legislature to replace Georgia's secretary of state — currently Brad Raffensperger, who pushed back on Trump's efforts to overturn his defeat — as chair of the state elections board, and then fill a majority of the panel with their own appointees. The bill further allows the newly-appointed election board majority to suspend and temporarily replace local election officials and take over county election offices. County boards determine voter eligibility and certify election results, meaning the state board appointee would theoretically have the power to disqualify certain voters or to refuse to certify the results, according to the Lawyers' Committee for Civil Rights Under Law. The law also bars local election officials from sending unsolicited absentee ballot applications or accepting grant money that is used by some cash-strapped counties to run elections. Voting rights advocate Stacey Abrams decried the provision as an "unprecedented power grab" intended to "alter election outcomes."

"This bill is a tragedy for democracy, and it is built on the lie of voter fraud," Lauren Groh Wargo, who heads the Abrams-founded voter advocacy group Fair Fight Action, said in a press call last month. "It means that radical, right-wing legislators, if they don't like how elections are being run ... can wholesale replace those election administrators and put folks from the other side of the state in charge."

It remains to be seen how this would work in practice. Some election experts have noted that there are guardrails that could prevent officials from overturning election results. The law limits such takeovers to four counties at a time and includes measures requiring the board to show multiple violations in at least two election cycles and a process that would drag out for at least 30 days. But it would be easy for the board to find multiple violations in "any county," argued Marilyn Marks, the executive director of the nonpartisan Coalition for Good Governance.

The law could "absolutely" be used to overturn election results, Albert said, given the repeated attempts by Trump supporters, including many Georgia Republicans and even Texas Attorney General Ken Paxton, to overturn the state's results last year. "Politicians will look to use any avenue available to them to maintain power. Just because it might have a few steps doesn't mean that they won't do it or figure out ways to get around those steps."

But it's more likely this law would be used to "ensure that their suppression measures are successful," Albert added. "What this is doing is saying, 'Hey, we enacted suppressive state laws and we want to make sure no local election official actually attempts to help people overcome the burdens of those state laws.'"

Some of the provisions in the Georgia law appear directly aimed at heavily Black and Democratic Atlanta-area Fulton and DeKalb counties. Texas lawmakers have introduced their own sweeping set of proposed voting restrictions that similarly target Harris County, the state's most populous, including the city of Houston, where Democratic officials expanded ballot access last year.

Texas Senate Bill 7 explicitly bans 24-hour early voting, drive-through voting, and the mailing of unsolicited absentee ballot applications, all of which were measures taken or attempted by Harris County officials last year. Texas House Bill 6 would make it a felony for election officials to mail pre-filled absentee ballot applications or even encourage eligible voters to cast ballots by mail or take any action to change election rules without the consent of the state's Republican secretary of state.

While those two bills have already advanced in their respective chambers, a third proposal that is still pending would shift all power over voter registration and voter roll maintenance from county officials to the Republican secretary of state.

Republicans in Arizona also pushed a proposal that would have allowed the GOP-led legislature to overturn election results and appoint their own electors, though that effort was ultimately quashed. But the state legislature, which has introduced two dozen restrictive bills, is still looking at bills that would bar the secretary of state from sending unsolicited mail-in ballots and another proposal that would shift approval of the state's election manual to the legislature.

"They don't serve any purpose, except for the Legislature just trying to insert themselves into the process, create obstruction, and say that they did something in the name of election integrity without actually doing anything that does that," Arizona Secretary of State Katie Hobbs, a Democrat, told The New York Times. "The Legislature wasn't interested in control over elections until I got here and happened to have a 'D' by my name."

Iowa Republicans have already passed a package of voting restrictions that include measures making it a felony for election officials to disobey any guidance from the Republican secretary of state and imposing $10,000 fines for any "technical infractions" of the state's election laws. It also bars county officials from sending unsolicited absentee-ballot applications and restricts their ability to open satellite early-voting sites.

"This is a total takeover of elections by the state," Linn County Auditor Joel Miller, who was among several local election officials in Iowa targeted by Trump and Republicans, told the Associated Press. "We did everything we could to increase participation and engagement in the democratic process, and evidently some people thought that more people participated than they wanted and they decided to put limitations on it."

Missouri lawmakers recently advanced a bill that would allow the secretary of state to audit and purge voters from any local election office's voter rolls. The bill threatens to cut funding to noncompliant offices and restricts mail-in voting. Another pending proposal would impose misdemeanor penalties on election officials who failed to purge voters within 10 days of their death.

South Carolina Republicans have rolled out a bill that would give the state legislature more oversight over the members appointed to the state's independent election commission.

An analysis by FiveThirtyEight identified 14 states with bills aimed at undermining election officials, including proposals to ban the mailing of unsolicited absentee-ballot applications in Michigan, Tennessee, Connecticut and South Dakota and bills restricting the mailing of absentee ballots in New Jersey, New York, Illinois and Wisconsin.

While the measures are not expected to get far in Democratic-led states — except in Michigan where Republican state lawmakers are plotting to subvert Gov. Gretchen Whitmer's vow to veto any voting restrictions — they are likely to advance in states where the GOP has attacked "election officials who did not support Trump's lies," Albert said.

Republicans have justified the proposals by arguing that election officials overreached in their efforts to expand mail-in voting amid the coronavirus pandemic and took "the law into their own hands" against the wishes of elected state lawmakers.

"It's a bunch of BS," Albert said in response to the Republican argument. "It is clearly an attempt to take power away not just from local election officials, but from Americans." Republicans, she added, are effectively giving themselves "the power to eliminate democracy in elections … what they're saying they want to do is take away the rights of Americans to elect their representatives."

Some advocates have also warned that many of these measures are aimed at counties with quickly changing demographics after record turnout among voters of color in 2020.

"The part that I think is so concerning is the retaliation," Myrna Pérez, director of the Voting Rights and Elections Program at the Brennan Center for Justice, told FiveThirtyEight. "Look at who on the ground would actually be impeded [by these laws]. That suggests to me a real opposition to an expanded electorate."

Democrats have responded to the voting restrictions proposed in dozens of states by championing the For the People Act, also known as H.R. 1 and S. 1, a massive legislative package including voter protections, anti-corruption measures and other provisions. It is unlikely to pass in its current form unless Democrats can reform the filibuster and convince conservative Democrats like Sen. Joe Manchin, D-W.Va., and Kyrsten Sinema, D-Ariz., to back it. But while the bill could protect voters from some restrictions, it would do little to prevent partisan power grabs of local election powers.

That issue has been raised as the bill goes through the Senate, but "off the top of my head, I honestly don't know what type of provision one would add to H.R. 1 that would address this," Albert said.

Some members of the Congressional Black Caucus have urged Democrats to focus instead on passing the John Lewis Voting Rights Advancement Act, which would restore the Voting Rights Act requirement for states with a history of racial discrimination to pre-clear any electoral changes with the Justice Department, which was scrapped by the Supreme Court in 2013.

Albert argued that there may be a legitimate way to address these attacks on local authorities through pre-clearance. "A strong argument could be made that changing the power of local election officials is definitely a change to election law that would have an effect on Black and brown communities," she said.

Albert compared the Republican push to take over local election powers to authoritarian regimes in Russia and North Korea.

"America is one of the only democracies that does not have elections run by a nonpartisan government entity," she said. "What you're seeing right now is the danger of politicians running elections. We should all be very much on guard."