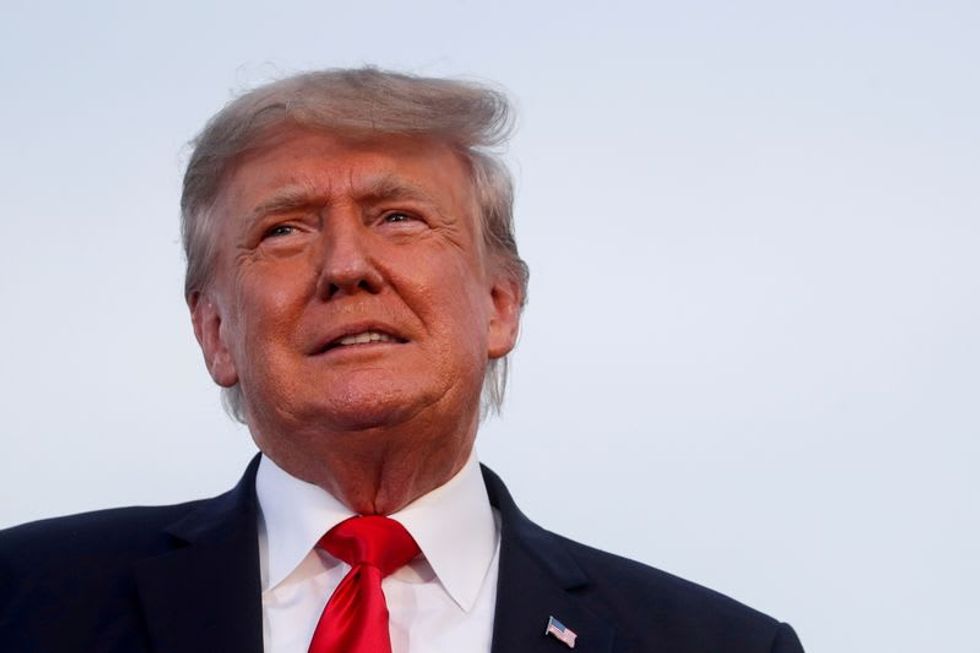 By Krystal Hu and Juby Babu

(Reuters) -Donald Trump's new social media venture said on Saturday it had entered into agreements to raise about $1 billion from a group of unidentified investors as it prepares to float in the U.S. stock market.

The capital raise, details https://www.reuters.com/markets/us/exclusive-trumps-social-media-venture-seeks-1-billion-raise-sources-2021-12-01 of which were first reported by Reuters on Wednesday, underscored the former U.S. president's ability to attract strong financial backing thanks to his personal and political brand. He is working to launch a social media app called TRUTH Social that is at least several weeks away.

Digital World Acquisition Corp, the blank-check acquisition firm that will take Trump Media & Technology Group Corp public by listing it in New York, said it will provide up to $293 million to the partnership with Trump's media venture, taking the total proceeds to about $1.25 billion.

The $1 billion will be raised through a private investment in public equity (PIPE) transaction from "a diverse group of institutional investors," Trump Media and Digital World said in a statement. They did not respond to requests to name the investors.

Trump Media inked its deal with Digital World to go public in October at a valuation of $875 million, including debt. The social media venture is now valued at almost $4 billion based on the price of Digital World shares at the end of trading on Friday. Trump supporters and day traders snapped up the stock https://www.reuters.com/business/finance/zero-12-bln-investors-chase-trump-stock-hype-2021-10-25.

Many Wall Street firms such as mutual funds and private equity firms snubbed the opportunity to invest in the PIPE. Among those investors who participated were hedge funds, family offices and high net-worth individuals, Reuters reported on Wednesday. Family offices manage the wealth of the very rich and their kin.

Some Wall Street investors are reluctant to associate with Trump. He was banned from top social media platforms after the Jan. 6 attack by his supporters on the U.S. Capitol amid concerns he would inspire further violence. The Capitol attack was based on unsubstantiated claims of widespread fraud in last year's presidential election.

"As our balance sheet expands, Trump Media & Technology Group will be in a stronger position to fight back against the tyranny of Big Tech," Trump said in a statement on Saturday.

If that price averages below $56 in the 10 days after the merger with Digital World has been completed, the discount will grow to 40% with a floor of $10, the companies added. Digital World shares ended trading on Friday $44.97.

Investors attending the confidential investor road shows were shown a demo from the planned social media app, which looked like a Twitter feed, Reuters reported.

Since Trump was voted out of office last year, he has repeatedly dropped hints that he might seek the presidency in 2024.

Special purpose acquisition companies such as Digital World had lost much of their luster with retail investors before the Trump media deal came along. Many of these investors were left with big losses after the companies that merged with SPACs failed to deliver on their ambitious financial projections.

TRUTH Social is scheduled for a full rollout in the first quarter of 2022. It is the first of three stages in the Trump Media plan, followed by a subscription video-on-demand service called TMTG+ that will feature entertainment, news and podcasts, according to the news release.

In a slide deck on its website, the company envisions eventually competing against Amazon.com's AWS cloud service and Google Cloud.

(Reporting by Juby Babu in Bengaluru and Krystal Hu in New York; Editing by Daniel Wallis and Cynthia Osterman)