Bob Brigham
Donald Trump speaking with supporters at an event hosted by Students for Trump and Turning Point Action at Dream City Church in Phoenix, Arizona in 2020. (Gage Skidmore/Flickr)

Donald Trump is facing yet another investigation into alleged misconduct as president of the United States.

On Thursday, the House Committee on Oversight and Reform announced it has launched an investigation into the boxes of Trump documents that the Archivist of the United States obtained at Mar-a-Lago, citing a Washington Post report.

"The National Archives and Records Administration has asked the Justice Department to examine Donald Trump’s handling of White House records, sparking discussions among federal law enforcement officials about whether they should investigate the former president for a possible crime, according to two people familiar with the matter. The referral from the National Archives came amid recent revelations that officials recovered 15 boxes of materials from the former president’s Mar-a-Lago residence in Florida that were not handed back in to the government as they should have been, and that Trump had turned over other White House records that had been torn up," the newspaper reported. "Archives officials suspected Trump had possibly violated laws concerning the handling of government documents — including those that might be considered classified — and reached out to the Justice Department, the people familiar with the matter said."

Rep. Carolyn Maloney (D-NY), the committee's chairwoman, said she was "deeply concerned that these records were not provided to [National Archives and Records Administration] promptly at the end of the Trump Administration and that they appear to have been removed from the White House in violation of the Presidential Records Act (PRA)."

“I am also concerned by recent reports that while in office, President Trump repeatedly attempted to destroy presidential records, which could constitute additional serious violations of the PRA," she added.

Legal experts have blasted Trump for taking the documents.

“Former President Trump and his senior advisors must also be held accountable for any violations of the law,” Maloney said. “Republicans in Congress obsessively investigated former Secretary of State Hillary Clinton for her use of a private email server for official communications. Former President Trump’s conduct, in contrast, involves a former president potentially violating a criminal law by intentionally removing records, including communications with a foreign leader, from the White House and reportedly attempting to destroy records by tearing them up.” 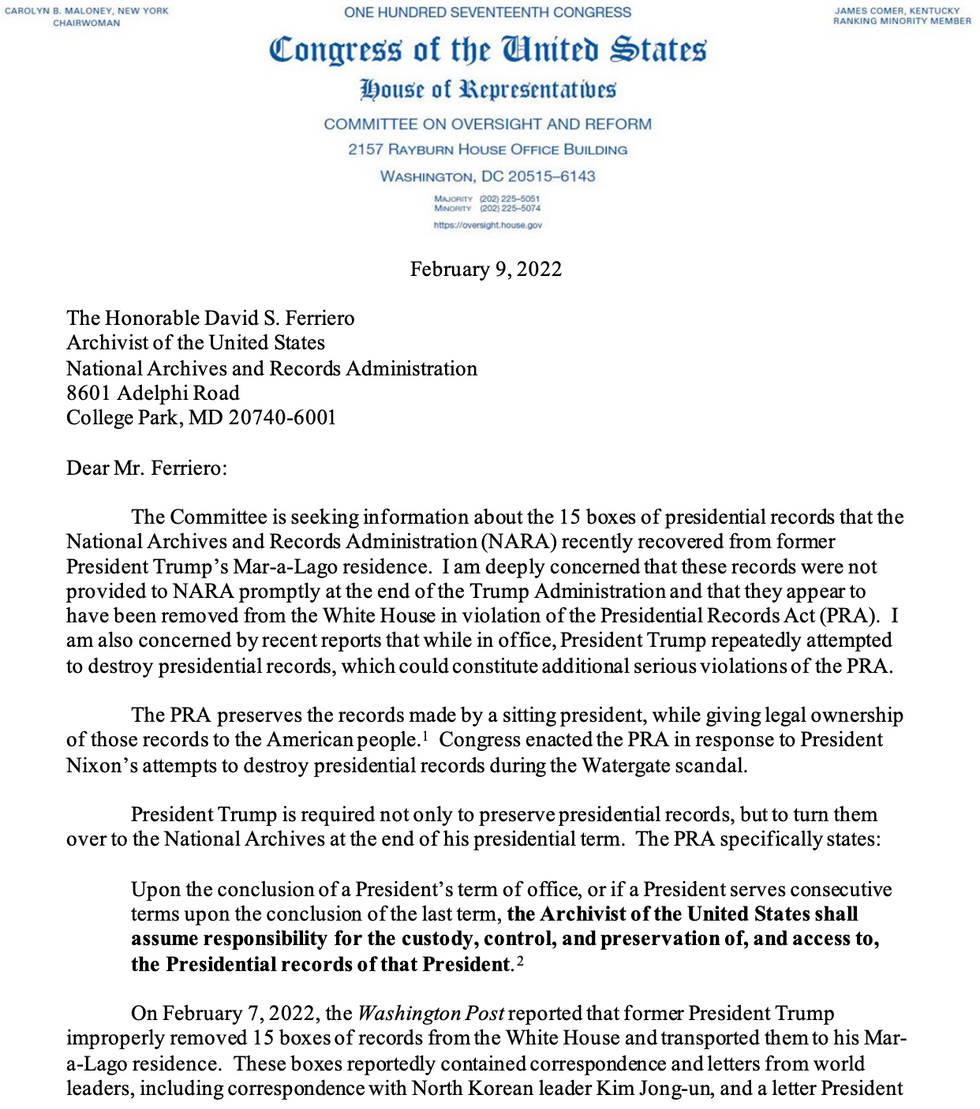