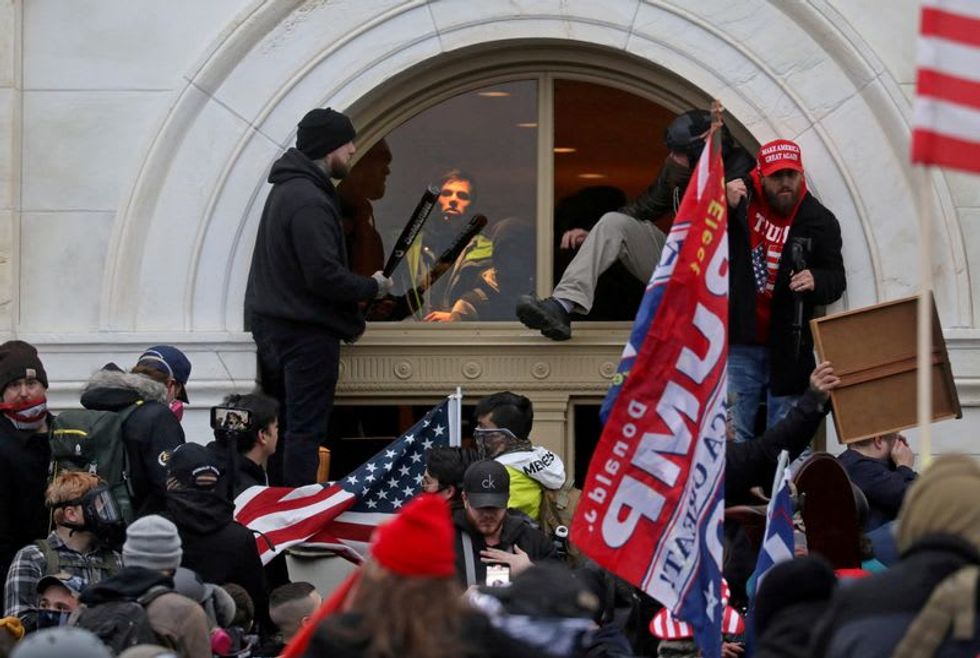 WASHINGTON (Reuters) -Two U.S. Senate Democrats known for independent streaks urged Republicans on Tuesday to support a bipartisan commission into the deadly January attack on the Capitol, after one in six House Republicans broke with party leadership and backed the probe.

Senators Joe Manchin and Kyrsten Sinema called on Republicans to work with them to reach agreement on a bill to investigate the events leading up to and on Jan. 6, when President Donald Trump's supporters stormed the building while Congress was certifying Democrat Joe Biden's November election victory, leaving five dead.

Some 35 House Republicans https://www.reuters.com/world/us/us-house-set-vote-commission-probe-deadly-jan-6-capitol-attack-2021-05-19 joined Democrats last week in voting to pass the legislation that would create a bipartisan commission modeled on the one Congress passed following the Sept. 11, 2001, attacks. The bill requires that the commission issue its final report by Dec. 31.

Passage of the bill was an easier achievement in the House of Representatives, where Democrats hold a 219-211 majority. The Senate is divided 50-50 between the parties and requires 60 votes to pass most legislation, meaning that under current rules, 10 Republican votes would be needed to pass the measure.

"A bipartisan commission to investigate the events of that day has passed the House of Representatives with a bipartisan vote," Manchin and Sinema said in a joint statement. "We implore our Senate Republican colleagues to work with us to find a path forward."

Minority Leader Mitch McConnell and other top Senate Republicans have spoken out against the House bill, saying that ongoing probes by two Senate committees are sufficient investigation.

Republicans are concerned that the commission will keep public attention on Trump and his continued false claims that his election defeat was the result of fraud, which could hurt them in the 2022 elections that will determine control of Congress.

Some Republicans have downplayed the violence of Jan. 6, when rioters smashed windows, fought with police and sent lawmakers and Vice President Mike Pence scrambling for safety.

Representative Andrew Clyde, who was photographed on Jan. 6 helping to barricade the House chamber door against attackers, has since compared the mob to "a normal tourist visit."

Majority Leader Chuck Schumer has said the Senate will take up the bill soon, but has not yet set a date for it. Republican refusal could reignite Democrats' debate about whether to suspend the 60-vote filibuster rule and pass the measure with just a simple majority vote.

"We hope to move forward with Republicans, but we are not going to let them saying no, stand in our way," Schumer said.

Just three of the seven Republicans who voted to convict Trump of inciting insurrection in his January impeachment trial have so far come out in favor of the idea.

Another Republican, Senator Susan Collins, has said she supports establishment of an independent commission but wants to amend the House-passed bill to ensure bipartisan staffing.

Republican Senator Bill Cassidy said he was reserving judgment until he sees the final bill. But he had a reply to McConnell's concern that the commission would be used as a political weapon.

"If they wish to have a political weapon, it'd be easy for Schumer and (House Speaker Nancy) Pelosi to each appoint their own committees and run now as long as they want to," Cassidy said. "So it seems like in that regard, this would be a better approach."