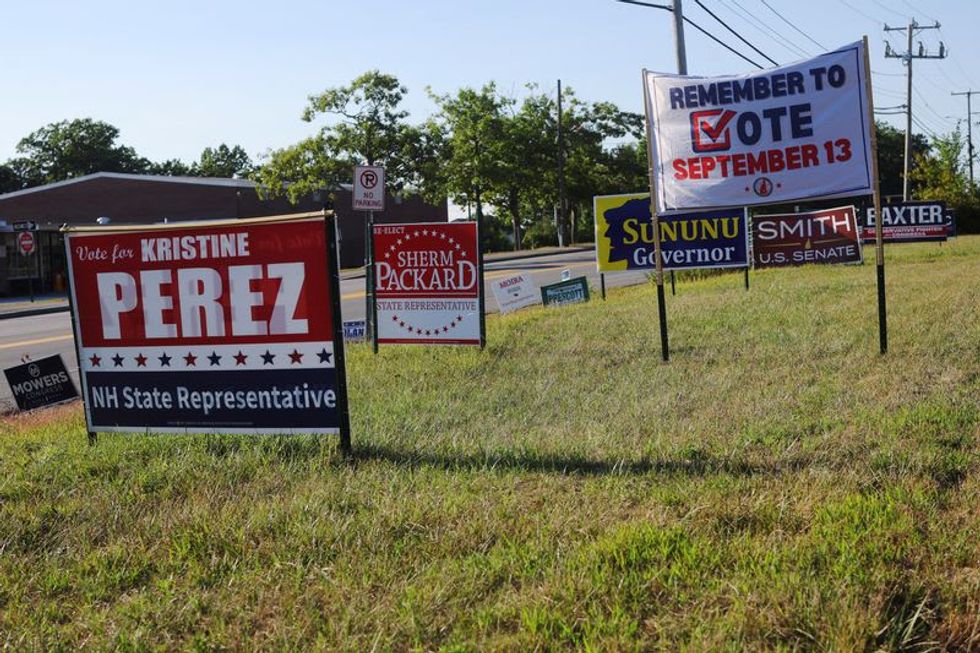 It is the last in a series of nominating contests that have seen Republicans repeatedly select candidates aligned with former President Donald Trump, causing some in the party to worry this hurts their chances of winning control of the U.S. Senate in the Nov. 8 midterm elections.

Taking back either the Senate or the House of Representatives would give Republicans the power to bring Democratic President Joe Biden's legislative agenda to a halt and launch potentially politically damaging probes.

The leading New Hampshire candidate, retired Army Brigadier General Don Bolduc, has echoed Trump's false claims about 2020 election fraud and questioned whether the Federal Bureau of Investigation should be abolished following its August search of Trump's Florida estate, where agents found a cache of classified documents. He has courted Trump, but Trump has not endorsed him.

Bolduc faces state Senate President Chuck Morse, a lower-key figure who is backed by White Mountain PAC, a national Republican group that has spent at least $4.6 million on his behalf. Several other candidates have failed to gain widespread support.

Morse would stand a better chance of defeating Hassan than Bolduc because he can appeal to independents who account for the majority of voters in the state, said Dartmouth College political science professor Linda Fowler.

The state's Republican Governor Chris Sununu endorsed Morse on Thursday, saying he would be the most competitive candidate against Hassan. Sununu has called Bolduc a "conspiracy theorist," while Bolduc has called Sununu a "communist Chinese sympathizer."

Sununu's decision last fall not to take on Hassan himself disappointed national Republicans, who believed the governor, a member of a well-known New Hampshire political family, would have easily unseated Hassan.

That, along with the nomination of political novices including former football star Herschel Walker in Georgia and celebrity doctor Mehmet Oz in Pennsylvania, have dimmed Republicans' chances of winning Senate control. They are still favored to take a majority in the House of Representatives.

Top Senate Republican Mitch McConnell has put his party's chances of winning that chamber at "50-50" in public remarks, noting concerns about "candidate quality" without singling out any specific candidates.

Nonpartisan analysts say Hassan holds the advantage over whoever wins the Republican nomination. But the Senate Leadership Fund, a national group affiliated with McConnell, has said it plans to spend $23 million on attack ads to help the Republican nominee.

New Hampshire is one of seven key battlegrounds along with Georgia, Pennsylvania, North Carolina, Wisconsin, Arizona and Nevada that analysts believe will determine control of the 100-seat Senate.

The chamber is currently divided 50-50, with Democrats holding a majority thanks to Vice President Kamala Harris' tie-breaking vote.

Along with the Senate contest, Republican voters in New Hampshire will pick candidates to take on the state's two incumbent House Democrats.

Republicans need to pick up only four seats to win control of the 435-seat House, and both of New Hampshire's seats are likely to be competitive in November.

Two former Trump administration officials, Matt Mowers and Karoline Leavitt, are among the Republicans hoping to take on incumbent Democratic Representative Chris Pappas in a district that covers the eastern half of the state.

In the other district, Keene Mayor George Hansel and former Hillsborough County official Bob Burns are among those vying to face Democratic Representative Ann McLane Kuster.

In Rhode Island, an open House seat is raising the possibility that Republicans could gain a foothold in a region where they have struggled to compete. Centrist Republican Allan Fung is unopposed in his primary, while state treasurer Seth Magaziner and former Biden administration official Sarah Morgenthau are among those competing for the Democratic nomination.

Voters will also go to the polls in Delaware, though the November election for its single House seat is not expected to be competitive.