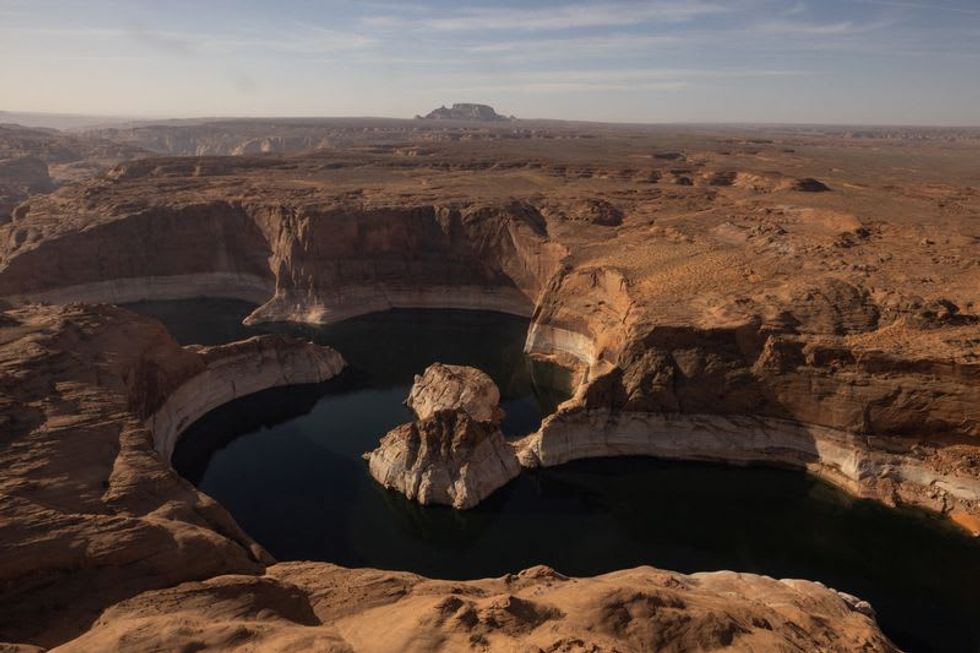 By Daniel Trotta and Caitlin Ochs

The U.S. Bureau of Reclamation in June had given the states 60 days, until mid-August, to negotiate their own reductions or possibly face mandatory cutbacks enforced by the federal government. Federal officials asked for a reduced usage of 2 million to 4 million acre-feet of water per year, an unprecedented reduction of 15% to 30% in the coming year.

But bureau and Department of Interior officials told a news conference they would give the states more time to reach a deal affecting the water supply of 40 million people.

"That said, we stand firm in the need to protect the system," Beaudreau said, adding that new federal money for water management would help.

Even so, federal officials said more cuts were needed.

For example, Arizona and Nevada, in addition to the country of Mexico, which also receives a Colorado River allotment, will have supplies reduced for a second straight year: 21% for Arizona, 8% for Nevada and 7% for Mexico. They are the first to be subject to cutbacks under the Colorado River compact.

The prospect for additional cuts is creating tension between the states.

"It is unacceptable for Arizona to continue to carry a disproportionate burden of reductions for the benefit of others who have not contributed," Ted Cooke, general manager of the Central Arizona Project, said in a statement.

The 23-year megadrought, the worst on record in at least 1,200 years, is testing the strength of the 100-year-old Colorado River compact.

"We need a collective vision for the basin, not competing management," said Daryl Vigil, co-founder of Water Tribes Initiative, which coordinates communication between the basin's 30 sovereign tribes who hold some of the most senior water rights on the river. "We have such an opportunity to do something different ... but how can we provide support to do the right thing when there is no formal place for tribal leaders to engage in negotiations?"

Lake Mead and Lake Powell are barely above one-quarter of their capacity. If they fall much lower, they will be unable to generate hydroelectric power for millions in the West, and also will not allow water to flow downstream.

"As we have emphasized since taking office, the circumstances we face will require swift action and increased water conservation in every state, from every sector," said Tanya Trujillo, the Interior Department's assistant secretary for water and science.

The Colorado River compact assumes the river would have roughly 20 million acre-feet of water each year. The river's actual flow the past two decades has averaged 12.5 million acre-feet, leaving state water managers with more rights on paper than water that exists in the river.

Liz Cheney is worried about Arizona

Rep. Liz Cheney (R-Wyo.) is expressing concern about the Republican candidates running for governor and secretary of state in Arizona as she believes they are a major risk to democracy.

Speaking at an event organized by the McCain Institute at Arizona State University, Cheney weighed in on Arizona candidates Kari Lake and Mark Finchem. According to Cheney, they are leading the pack of Republican candidates that may not accept unfavorable election results.