US sues Texas after it blocks transport of migrants in state 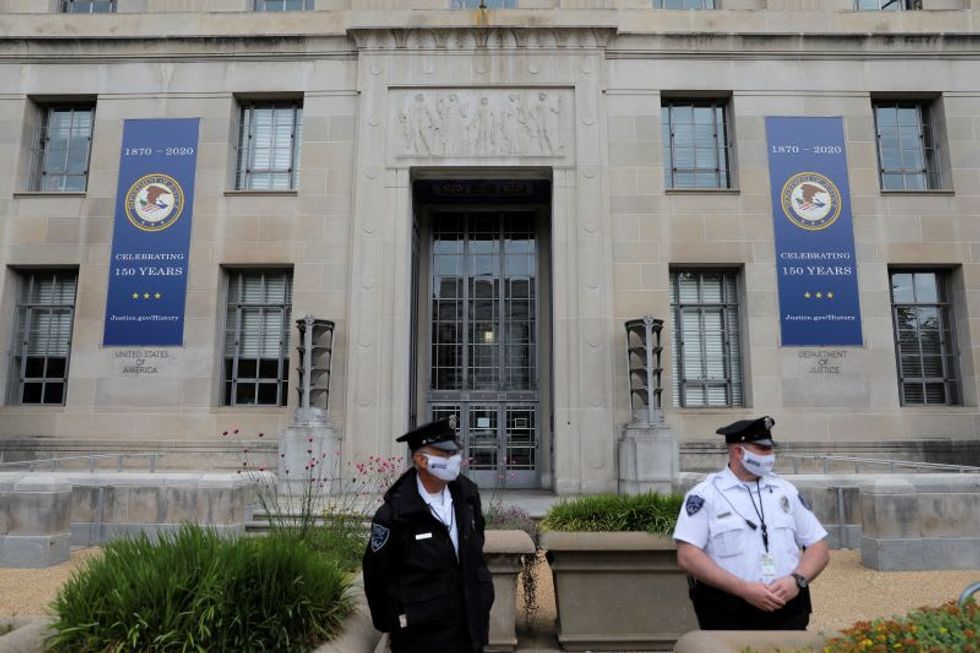 (Reuters) -The U.S. Justice Department sued Texas Governor Greg Abbott on Friday, seeking to block an executive order that restricts the transport of migrants through the state and authorizes state troopers to pull over vehicles suspected of doing so.

In a lawsuit filed in El Paso federal court, the Justice Department said Abbott's order, which he said was aimed at preventing migrants from potentially spreading the coronavirus, illegally infringes upon the federal government's jurisdiction over immigration matters.

The order, which Abbott signed on Wednesday, permits only "law enforcement officials" to provide ground transport for migrants detained for illegally crossing the southern border. It also gives the state's public safety department the authority to stop any vehicle suspected of carrying migrants and send it back to its point of origin.

The order would interfere with the U.S. government's ability to transport migrants between facilities, including unaccompanied children, according to the lawsuit. The government regularly employs contractors and other non-law enforcement personnel to transfer migrants.

Texas has become a battleground on immigration as Republicans and supporters of former President Donald Trump push back against Biden's efforts to relax the restrictionist policies of his predecessor. Republicans want to galvanize opposition to Biden's immigration policies to mobilize voters ahead of the 2022 congressional elections.

The Republican governor said the order was aimed at curbing the spread of the coronavirus, citing a "dramatic rise in COVID-19 cases" among migrants.

There is no clear evidence that migrants are primarily responsible for an increase in coronavirus cases in the state. Texas, where about 44% of residents are fully vaccinated, has seen cases surge by more than 200% in the last two weeks.

The lawsuit made good on a threat https://www.reuters.com/world/us/us-attorney-general-garland-tells-texas-rescind-order-limiting-immigrant-travel-2021-07-29 issued on Thursday by U.S. Attorney General Merrick Garland, who urged Abbott to rescind the order immediately.

In response to the lawsuit, Abbott said the Biden administration had created a "constitutional crisis" between the federal government and the state of Texas.

"This stems from the Biden administration's refusal to enforce immigration laws and allow illegal immigrants with COVID-19 to enter our country," he said.

After technical problems derailed two launch attempts several weeks ago, a new liftoff of the Artemis 1 mission scheduled for Tuesday is now threatened by a storm gathering in the Caribbean.

According to a report from the Guardian, advisers to Donald Trump are beginning to panic that the Department of Justice's investigation into top secret documents that were illegally whisked away to his Mar-a-Lago resort is moving much faster than they had hoped.

This past week saw special master Raymond Dearie put the former president and his legal team on the spot over Trump's claims that he declassified the documents, as well as his assertions that the FBI "planted" evidence against him.

By Stephen Neukam, The Texas Tribune

Offering a scorching rebuke of what he called the “woke right,” U.S. Rep. Dan Crenshaw, R-Houston, continued to distance himself from some firebrand conservatives, accusing them of helping to sow manufactured division in the party.

In an interview with The New York Times’ Jonathan Martin for The Texas Tribune Festival, the two-term congressman admonished “alt-right” politicians and their supporters for wanting “to wear a jersey and just scream at the other side.”

“They remind me of the far left more than anything,” Crenshaw said. “If the first words out of their mouths are ‘RINO’ and ‘establishment’ and ‘globalist,’ rest assured they are not very thoughtful and they are probably about to lie to you. I’m just sick of it.”

Despite what he said were inauthentic divisions in the party, Crenshaw said conservatives “have never been more aligned ideologically.”

While Crenshaw stopped short of pointing fingers at specific members of his party, Martin suggested provocative Rep. Marjorie Taylor Greene, R-Georgia, whom Crenshaw has feuded with in the past, as an example of the reactionary Republicans the congressman was dinging in the interview.

While lawmakers like Greene continue to be “contrarian,” Crenshaw said, House leadership has fewer and fewer ways to contain them. Instead, he said, the illusion of a controlling GOP apparatus is exaggerated.

“They don’t have many tools, there is no establishment,” Crenshaw said. “It is a myth perpetuated by people like her.”

Crenshaw said social media plays a pivotal role in how those politicians are able to fight for and maintain the attention of voters and the media.

“They don’t write any actual legislation, they won’t negotiate anything,” Crenshaw said. “It’s just fire and brimstone all of the time. You’re incentivized by extra clicks, and you get extra clicks by engaging in rank dishonesty and conspiracy.”

To the extent there is genuine division among Republicans, Crenshaw said those differences have bled into how people in the party view former President Donald Trump and his potential bid for election in 2024.

“I think there’s just mixed feelings,” Crenshaw said. “I hear from voters and donors and activists all of the time — they really love Trump. But they won’t necessarily say they want him to run again.”

For his part, Crenshaw said he welcomes every Republican who wants to run in the 2024 primary and took his name out of the hat for both the White House and Senate, saying he would not run for either in two years.

Disclosure: The New York Times has been a financial supporter of The Texas Tribune, a nonprofit, nonpartisan news organization that is funded in part by donations from members, foundations and corporate sponsors. Financial supporters play no role in the Tribune’s journalism. Find a complete list of them here.

The Texas Tribune Festival is here! Happening Sept. 22-24 in downtown Austin, this year’s TribFest features more than 25 virtual conversations with guests like Eric Adams, Pete Souza, Jason Kander and many others. After they air for ticket holders, anyone can watch these events at the Tribune’s Festival news page. Catch up on the latest news and free sessions from TribFest.

This article originally appeared in The Texas Tribune at https://www.texastribune.org/2022/09/23/dan-crenshaw-texas-tribune-festival/.