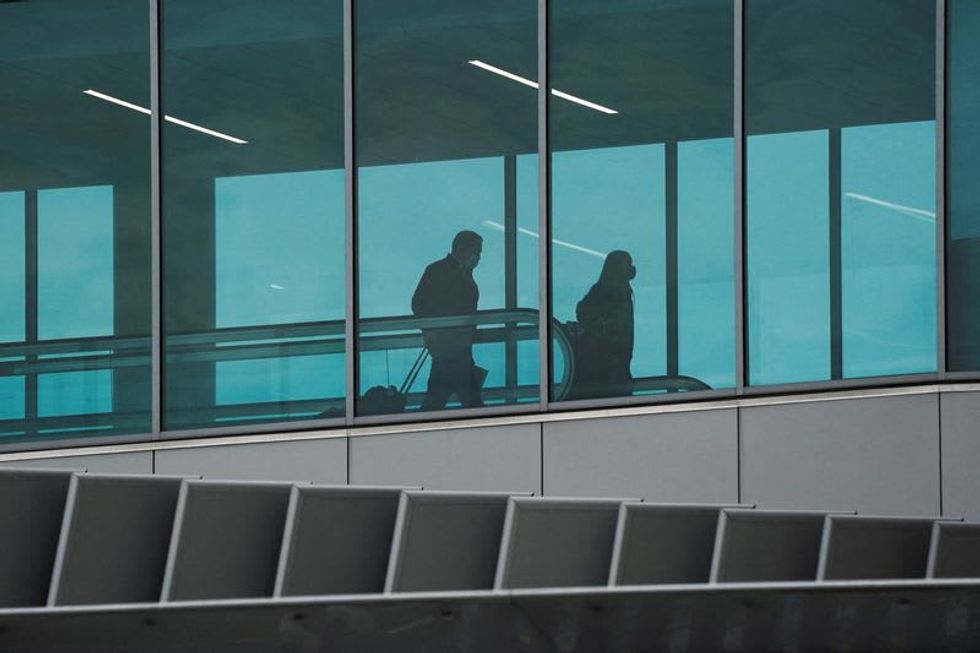 NEW YORK (Reuters) - Millions of Americans carried on warily with travel plans through a second pandemic-clouded holiday season, despite a growing wave of COVID-19 infections driven by the Omicron variant, though many were forced to scale back their ambitions.

Moses Jimenez, an accountant from Long Beach, Mississippi, went ahead with a New York City trip with his wife and three children, even though the latest torrent of coronavirus cases has dashed their hopes to catch a performance of "Hamilton" or visit some museums.

"Hamilton" was one of a dozen Broadway shows forced to cancel shows this week as cast and crew members tested positive for COVID-19. Museums were scratched from the family's itinerary because many now require proof of vaccination and the two younger children are ineligible for the shot.

Instead, Jimenez, 33, said his brood will make the best of roaming the city's streets and parks, while also seeing relatives and friends in the area. On Christmas Day, they plan to enjoy a home-cooked meal, a family tradition, at their Airbnb lodging in the city.

"We just wanted to get out of the house, really, get the kids out to the city for Christmas," Jimenez told Reuters on Thursday at New York's LaGuardia airport.

COVID-19 infections have surged in the United States in recent days due to Omicron, which was first detected in November and now accounts for nearly three-fourths of U.S. cases and as many as 90% in some areas, such as the Eastern seaboard.

The average number of new COVID infections has risen 37% to 165,000 per day over the past week, according to a Reuters tally.

Daily totals of deaths and hospitalizations, considered lagging indicators, were little changed nationwide over the past seven days, but have jumped 55% and 28%, respectively, over the course of December.

Anticipating an even larger flood in cases requiring medical attention, the Centers for Disease Control late Thursday cut its recommended quarantine period for COVID-positive healthcare workers who are asymptomatic to seven days from 10.

While Americans scrambled for COVID-19 tests and weighed varying public health guidance about how to gather safely, many were determined to brave the latest surge to enjoy some semblance of holiday celebrations and tradition.

The Transportation Security Administration on Wednesday screened 2,081,297 passengers through the nation's airports, an increase of 144,000 over the number of travelers it screened pre-pandemic on the same date in 2019.

In-person Christmas services will be held at all churches and parishes in the Roman Catholic Archdiocese of New York, which includes more than 2.5 million worshipers across 10 counties, spokesperson Joseph Zwilling said.

Although Omicron has prompted no new restrictions, the Archdiocese will maintain mask-wearing and social distancing rules it first instituted last year.

"The existing measures have been working," Zwilling said.

U.S. health officials have said people who are fully vaccinated should feel comfortable proceeding with holiday travel and family gatherings. They warned those who are unvaccinated are at higher risk of getting seriously ill or dying from the virus.

Many New York holiday visitors planned to limit themselves to much smaller gatherings.

Madeleine Kennedy, a ski instructor from Lake Geneva, Wisconsin, flew to New York City on Thursday armed with a trove of COVID testing kits as she prepared to spend Christmas with her family in the borough of Queens.

It will be a scaled-down affair this year, with guests required to take a COVID test before gathering, she said, and with some relatives spending the holidays in Chicago.

“The second time around, I think the world is less shocked and I think we're going to be able to plow through this,” Kennedy said.