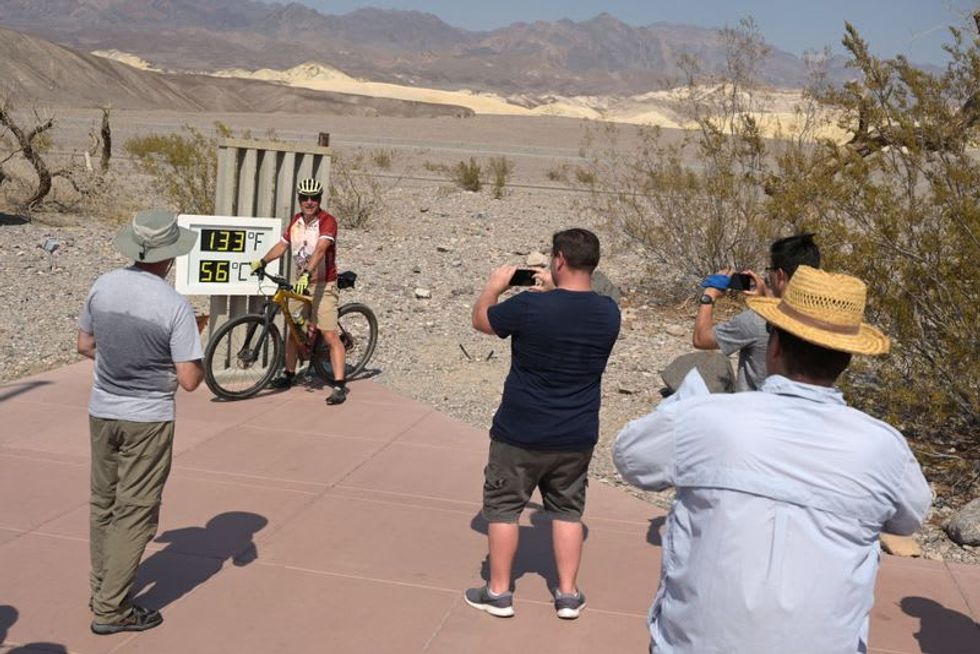 DEATH VALLEY, Calif. (Reuters) - A brutal heat wave punishing the U.S. West pushed temperatures toward all-time records for a third day on Sunday, as Death Valley in California, scorched at 130-degrees Fahrenheit (54 Celsius) was again one of the hottest spots on the planet.

A thermometer outside Furnace Creek Visitors Center in the heart of Death Valley showed 134 degrees Fahrenheit shortly before 4 p.m. (2000 GMT) on Sunday, although a National Park Service ranger said that it was typically slightly above the official reading.

The National Weather Service recorded the temperature on Saturday at 130 degrees, which if verified would be one of the highest ever recorded on Earth. A ranger measured the sidewalk temperature outside the visitors center at 178 degrees Fahrenheit on Sunday afternoon.

"I just came up here to see how hot it gets," said Richard Rader of Scottsdale, Arizona, who said he had ridden his bike 10 miles across Death Valley on Sunday.

Other tourists got out of their air-conditioned cars only long enough to pose for pictures with the thermometer.

The sweltering heat, which extended across much of the Pacific Northwest, pressured power grids and fueled major wildfires, including a blaze burning in Southern Oregon that threatened homes and knocked out electricity.

The National Weather Service issued excessive heat warnings across much of the region and cautioned residents that the high temperatures could be hazardous to the their health and that of loved ones, especially small children and the elderly.