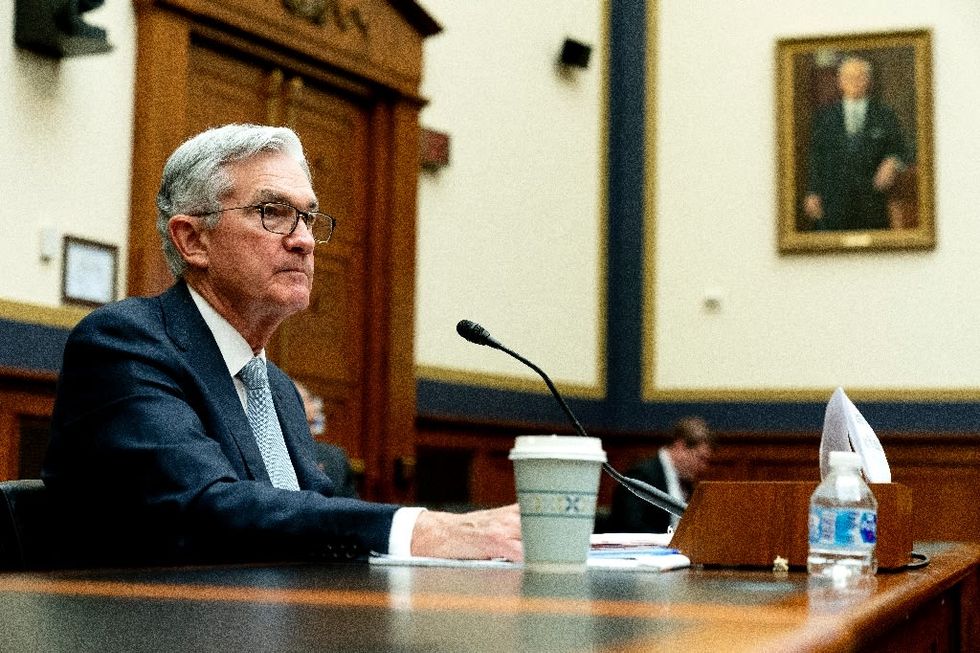 Washington (AFP) - The impact of the conflict in Ukraine on the US economy is "highly uncertain" and the central bank will need to move with care to contain rising inflation and ensure the recovery continues, Federal Reserve Chair Jerome Powell said Wednesday.

With US prices rising at their fastest pace in four decades and oil soaring to nearly $113 a barrel on Wednesday due to the war and the sanctions imposed on Moscow by Washington and Brussels, the Fed chief repeated that policymakers are ready to raise interest rates to tamp down inflation.

However, Powell said the central bank will "proceed carefully," and he favors increasing the benchmark borrowing rate by a modest quarter-point at the Fed's meeting later this month, although more aggressive moves are possible if inflation remains high.

He expressed confidence central bankers can achieve a "soft landing" of the world's largest economy.

"The near-term effects on the US economy of the invasion of Ukraine, the ongoing war, the sanctions, and of events to come, remain highly uncertain," he said in his semi-annual testimony to Congress. "We will be monitoring the situation closely."

Some Federal Reserve officials have been calling for the policy-setting Federal Open Market Committee to make more a aggressive increase of half a percentage point at the March 15-16 meeting.

But in an unusually direct statement, Powell told lawmakers, "I'm inclined to propose and support a 25 basis point rate hike" for the first step in a series of increases.

Economists note that while rising oil prices could fuel faster inflation due to higher energy and wheat prices, sanctions on Russia and other spillovers could slow the economic recovery.

Speaking before the House Financial Services Committee, Powell said if inflation accelerates or stays "persistently high," Fed policymakers "would be prepared to move more aggressively by raising the federal funds rate by more than 25 basis points at a meeting or meetings."

Need to be nimble

The Fed slashed the benchmark lending rate to zero at the start of the pandemic, and flooded the financial system with cash in an effort to stave off a severe recession.

Together with massive federal spending programs, that effort was largely successful: the economy bounced back quickly, with growth of 5.7 percent in 2021.

But high demand, supply chain snarls and labor shortages have combined to push the Fed's preferred inflation index to 6.1 percent in the year ended in January, far above the two percent target, due in large part to rising costs for housing and cars.

This bout of inflation "is just nothing like anything we've experienced in decades," Powell said, acknowledging that supply chain bottlenecks "have been larger and longer lasting than anticipated."

High inflation "imposes significant hardship" on Americans and he said the Fed will use all its tools to ensure rising prices do not become entrenched.

Powell, who is awaiting Senate confirmation for a second term as Fed chair, said the central bank's goal is to "promote a long expansion" to ensure all segments of society benefit from the growing economy.

Despite the challenges "we all know what we need to do," he said, and "I think it's more likely than not that we can achieve what we call a soft landing... (and) get inflation back under control, without a recession."

Even before the war in Ukraine, US businesses reported rising costs and problems finding enough workers to ramp up production and meet demand.

"The labor market is extremely tight," Powell said, with unemployment at four percent.

The Fed's "beige book" report released Wednesday on economic conditions prior to February 18 noted that companies expect "additional price increases over the next several months" as they continue to pass higher costs on to consumers.

Setting policy in the current environment "requires a recognition that the economy evolves in unexpected ways," Powell said, adding, "We will need to be nimble in responding to incoming data and the evolving outlook."

Trump acknowledges past business interactions with the mob in new book

CNN reports that Haberman's new book, titled "Confidence Man: The Making of Donald Trump and the Breaking of America," offers new details about Trump's past business practices, which came into the public spotlight earlier this week when New York Attorney General Letitia James filed a civil lawsuit alleging the former president and three of his adult children engaged in years of systemic fraud.

Bill Barr blasted for defending Trump and claiming ‘children’ Don Jr., Eric, and Ivanka should not be part of fraud case

James says she expects to be able to stop Trump from engaging in certain business operations in the state of New York, after alleging he fraudulently inflated and deflated the value of his assets based on if it would help or hurt him.

New York District Attorney Alvin Bragg is yet again under fire for appearing to have dropped the longtime criminal investigation into Donald Trump and his real estate empire, after New York Attorney General Tish James announced a bombshell civil suit against Trump and his family members for many of the same acts the criminal case was presumed to cover.

Bragg, a former Assistant United States Attorney in the Southern District of New York (SDNY), took office on January 1, 2022, after winning election following the retirement of Cyrus Vance, Jr. Many had expected Vance to file charges, but almost immediately Bragg was accused of slow-walking the last portion of the investigation. By February 23, the investigation's top two prosecutors abruptly quit.