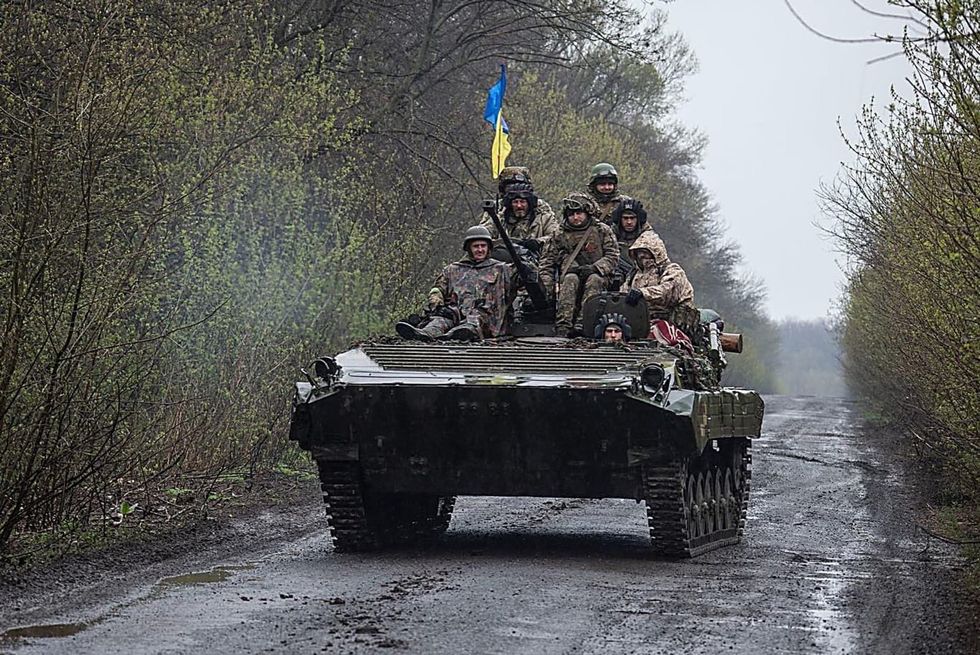 Ukrainian troops are seen in the east of the country. -/Ukrainian Ground Forces via ZUMA Press Wire Service/dpa

In a dramatic appeal, the Ukrainian commander of the remaining marines in the heavily contested port city of Mariupol has asked for an evacuation to a third country.

"The enemy outnumbers us 10 to 1," Serhiy Volyna, commander of Ukraine's 36th Marine Brigade, said in a one-minute video message posted to Facebook early Wednesday morning. "We appeal to all world leaders to help us."

The Ukrainian side is defending only one site, the Azovstal Steel Works, where civilians are sheltering in addition to the military.

Volyna asked for an "extraction procedure" and urged that everyone - soldiers from the Mariupol garrison, more than 500 wounded combatants and hundreds of civilians - be taken to safety on the territory of a third country.

"This is our appeal to the world," said Wolyna. "This could be the last appeal of our lives. We are probably facing our last days, if not hours."

The south-eastern Ukrainian port of Mariupol was completely surrounded by Russian troops on March 1, shortly after the start of the Russian attack on Ukraine.

The city and the port are largely considered to have been destroyed.

Most recently, according to Russian information, around 2,500 Ukrainian fighters and 400 foreign mercenaries were holed up in the steelworks.

According to Ukrainian reports, around 1,000 civilians are said to have sought protection there. Russia has repeatedly called on Ukrainian troops to surrender.

Top Republican to meet Biden on avoiding US debt default

House speaker Kevin McCarthy said he would meet Wednesday with Joe Biden to discuss avoiding a US debt default, but warned the president must rethink his refusal to consider spending cuts in exchange for raising the borrowing limit.

"I want to find a reasonable and a responsible way that we can lift the debt ceiling," while controlling what he called runaway spending by Congress, the Republican leader told CBS Sunday show "Face the Nation."

America may now be aiming to put astronauts back on the Moon, but for years the United States turned its back on manned missions after the Columbia space shuttle disaster.

Its space program suffered a catastrophic setback when all seven astronauts were killed when the shuttle broke up on re-entering the Earth's atmosphere 20 years ago on February 1, 2003.